Countless ideas crossed the thought of revolutionaries in May 1810. But despite the differences, one way or another, they were going to achieve it. 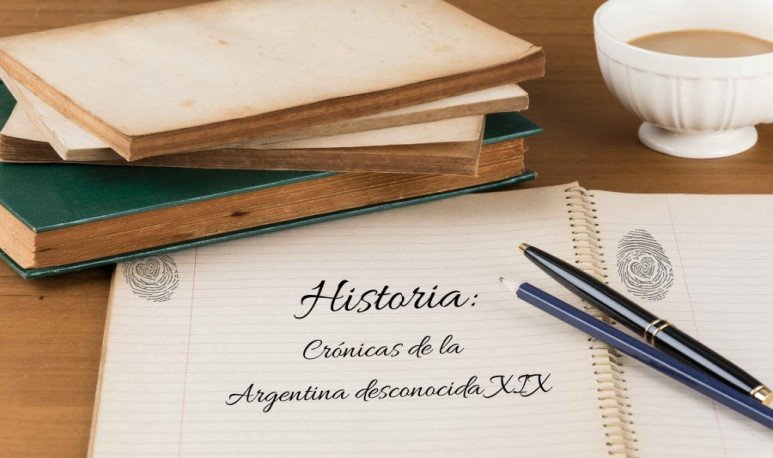 On May 25  , 2020, a museum will be inaugurated in what was the former house of  Juan Manuel de Rosas   . This property, inherited by the family of Encarnación Ezcurra, was dismantled at the beginning of the last century in order to assemble a series of massive tenants typical of the days of European immigration. Then it was transformed into a parking lot. She recently ended up hosting an archaeological excavation supervised by Ana Igareta, researcher at Conicet and the Institute of History, Theory and Praxis of Architecture and City (HitePAC) of the Faculty of Architecture and Urbanism.  It is located in Moreno to 500 and from this year will integrate the route of the Apple of Lights.

Despite how interesting the news may sound, Juan Manuel de Rosas was very young during the days of the  May Revolution . It was not yet part of the circle leading the uprising. Knowing something like that, why would the discovery of the old house on Moreno Street be so important when it comes to remembering the events   of May 25  ? It is true that the nascent struggle between “  unitarians  ” and “  feds  ” already sounded between the discussions that took place at the secret meetings of the independence. However, it is also true that the discovery of the house of  Rosas says much more about the society that inhabited Buenos Aires between the eighteenth and nineteenth centuries. What were those men looking for?

The people of those times, like our day, were  intensely politicized . They were urged to establish an autonomous government, taking advantage of an unrepeatable situation:  the accrued Spanish crown was still in the hands of France.  If there was anything particular in this matter, it was that the slogans between the future “  unitary  ” and “  feds  ” were very confusing and based on the discussion between “  radicals  ” and”  bonapartistas  .” Paradoxically, much of the ideas that seem to us today come from the “ unitarist ” sector, then had echoes ofthe “ federal ” arguments and vice versa. The concepts that would make up this solid Argentinean antinomy some time later, barely germinated.

As we refer in  previous chronicles , explicitly secular thinking of the   Freemasonry   was everywhere. Forbidden by   Cisneros  's authority, she had drowned in her own discussions. Napoleon phagocyted  Freemasonry , creating the  Order of the East and  the true Freemasons, fathers of the French Revolution , unfailingly returned to underground.

Moreno and  Saavedra  were confronted by the aftershocks of this distant European conflict and on May 25 they found the creoles disorderly, divided and saturated with conflicts. That's why it wasn't easy to agree on an   Open Cabildo  . The petition had passed through the hands of Cisneros since 18 May and the “Saavedristas” deals did not end up closing. Hence the outburst of French and Beruti, as well as the anger of  Alberdi, Castelli, Belgrano and,  especially, the pertinent radicalization of the thought of   Mariano Moreno  .

People gathered in the square were eagerly waiting for a resolution. A message, a verdict, some word that would appease the mood. They needed to “know what those endless discussions were all about.”

So many turns and turns ended up warming the atmosphere even more and it was already warned that there were many interests at stake, as we read in the archaeological site where Rosas's house was erected. Observing the remains there, says archaeologist Ana Igareta, that high-class Argentines preferred European objects rather than local manufacturing. From the 18th century, poor-quality dishes of French origin were imported, instead of buying the excellent porcelain and the finest glassware that was made here (see pictures). This is understood only if we think that then society was affected by the influence of politically endogenous groups. This is why the study of archaeological objects is used: they are interpreted in order to understand the behavior of those who used them. According to the case of the site located on Calle Moreno, it is possible to observe red stamps of the Holy Federation (see photo). This imprint already existed in 1810, although not in the explicit manner shown by Rosas's tableware. A very anarchic feeling faced peninsular Europeans and  Creoles , whites and indigenous peoples, free men and women.  African slaves , rich and poor. Everyone had their own thoughts. Despite the deep ethnic mixtures that brought them together in a strange melting pot of identities, the words separated them.

Despite this, the intense social fracture he identified in the first two decades of the 1800s, coincided with the existence of a basic germ, which could make things start to work. The creation of the   First Patriotic Government   would be considered the fundamental point for sowing this seed and  building something similar to a republic  . They always end up resonating in our ears   Saavedra   and  Moreno  as antagonistic characters. But the truth is that there was a plethade of intellectual tendencies populating the minds of revolutionaries. Many of them ended up disappearing. Others germinated into social movements. Even in political parties.

Such diversity can only represent a trend that affected society in all its strata. During the first half of the nineteenth century, the most intense focus of thought that humanity would give after the  French Revolution began to see the light. “ The Romantic Ideal ” was being born.

Far from the pre-concepts built with regard to this movement that crossed all Western thought, it is necessary to clarify that “ romanticism ” has little to do with the easy tears of current soap operas. Kisses, congojas and sighs do not contain in themselves the meaning of this deep intellectual current. The men of the   First Junta   were prone to these tendencies that by 1830 would even generate a  manifesto."Romanticism  ” was a movement cultural, political and social background of deep philosophical roots.

The “ romantics ” were men of great passions. They exalted the devotion to the loved one as well as to the homeland to which they belonged, uniting the intensity of both feelings until they confused them.  While it is true that the dangerous nationalism of the 20th century have their origin in the romanticism of the 19th century,  their early expressions highlighted other virtues, much purer  . Most of the European and Latin American countries were organized within this new thought.

For that same love of the country, the   First Junta   knew how to avoid the differences that enmity a large part of its members. There is no denying that intense brotherhood was provisional. The contrasts became noticeable immediately.

However, on May 25, 1810, something amazing happened.  That group of men gathered around any difference, to sign an unprecedented  social and political agreement   .

Cornelio Saavedra, Mariano Moreno, Manuel Belgrano, Manuel Alberti, Juan José Castelli, Juan José Paso, Miguel de Azcuénaga, Juan Larreay Domingo Matéu ... All agreed to establish the First Provisional Governmental Board of the United Provinces  appealing to the absence of the king from Spain.  On behalf of Mr. Fernando VII , they took their lands to free them from Cisneros, from the Junta de Sevilla and Cádiz, as well as from the danger that France embodied (see photographs).

Virtually, the Argentine nascent  would autonomously rule the United Provinces  at least as long as Napoleon kept  Ferdinand VII  abducted. It was necessary to be smart and expeditious. They should enforce the political situation and turn a transitional act  into   something relevant and inspiring for future generations  . 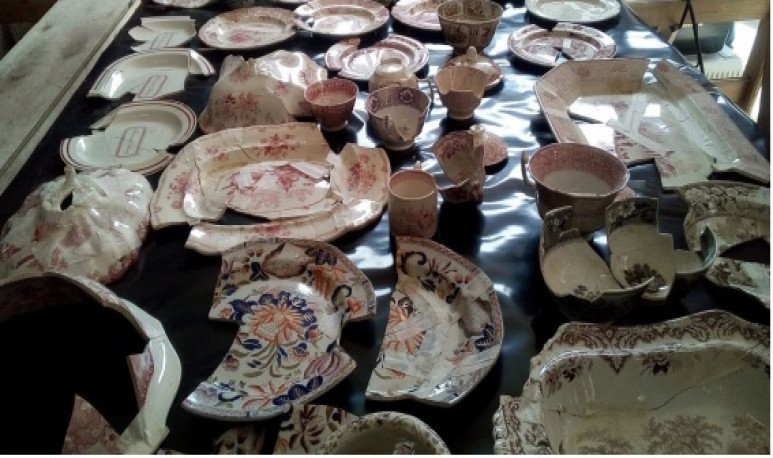 Vagilla in custody of the General Directorate of Heritage, Museums and Historic Centre of the City, Calle Moreno al 500 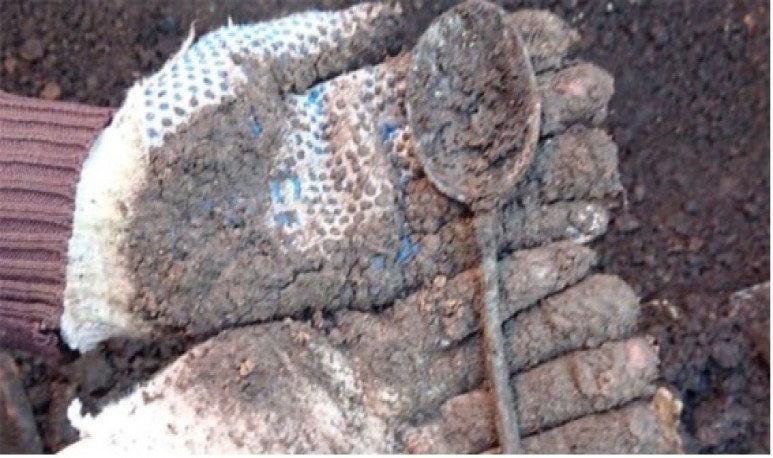 The objects are meticulously classified, because they cover part of the 18th and 19th century 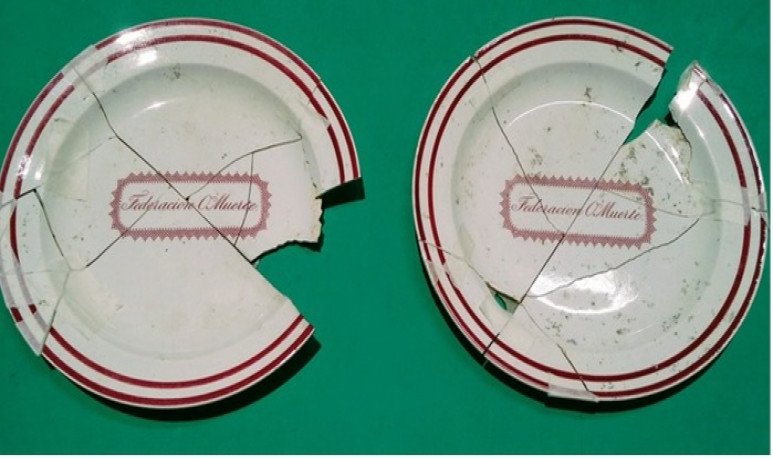 It is striking how, a lot of dishes found in the archaeological site of Moreno at 550 (CABA), bears a stamp that verses “Federation or Death”, showing the deep social and political division of the nascent republic. 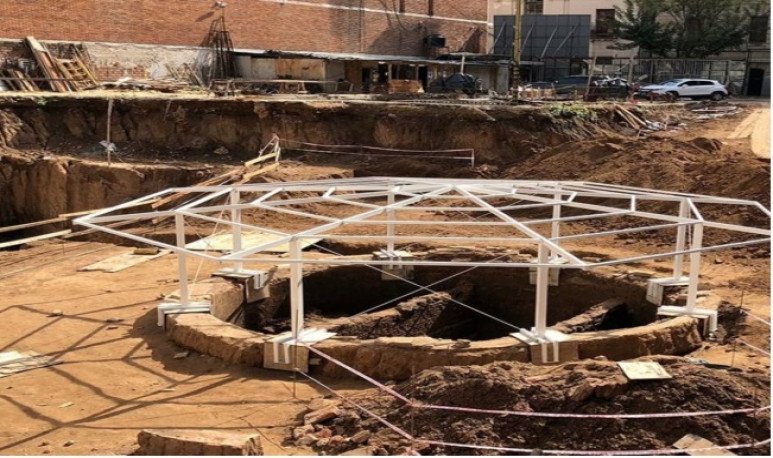 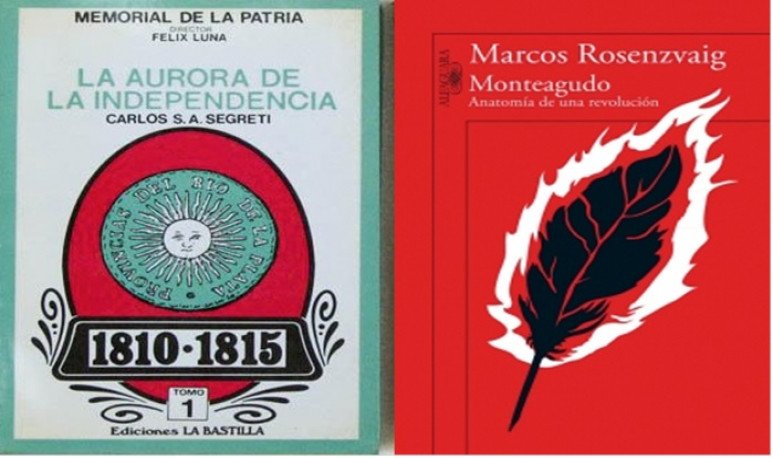 Anonymous books describing the same event. Carlos Segreti in his book “La Aurora de la Independencia” (Ediciones Astrea, Buenos Aires 1980), explains “the system of retroversion of sovereignty” that Castelli exhibited in the assembly of the Cabildo Abierto. It was invoked by an international treaty that was in force for a long time. Segreti, expands by saying that it was a law proclaimed long ago by King Alfonso and would not be easy to interpret. That is why Tucuman independence lawyer Bernardo de Monteagudo simplified the issue by building a syllogism saying: “Should the fate of Spain be followed or resist in America? The Indies are a personal domain of Ferdinand VII; the king is prevented from reigning; therefore the Indies must govern themselves” (see also “Anatomy of a Revolution” by Marcos Rosenzvaig, Ediciones Penguin Random House, Grupo Editorial Argentina, 2016). Based on these legal reasonings, the First Board was formed, breaking relations with intermediaries such as the gloomy Cisneros or the dubious Council of Cadiz. 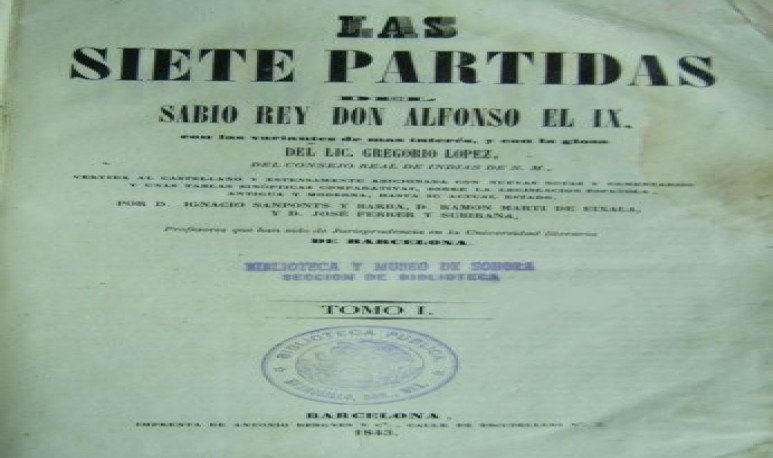 The theory of the Mask of Ferdinand VII also circulated in those days. The revolutionaries were to claim the land in the name of the king of Spain, which would free them from the existence of every possible intermediary. That was how they declared their split with respect to Jose Bonaparte. Something so conceptually complex consisted of a legal formality that would allow the politicians of the Rio de la Plata to act on behalf of the king. Consequently, by invoking the Spanish crown,  they would obtain the legal immunity necessary to decide on vicerreinal territories . The document we show contains the following premise: peoples without king have   “the right to become a junta”. 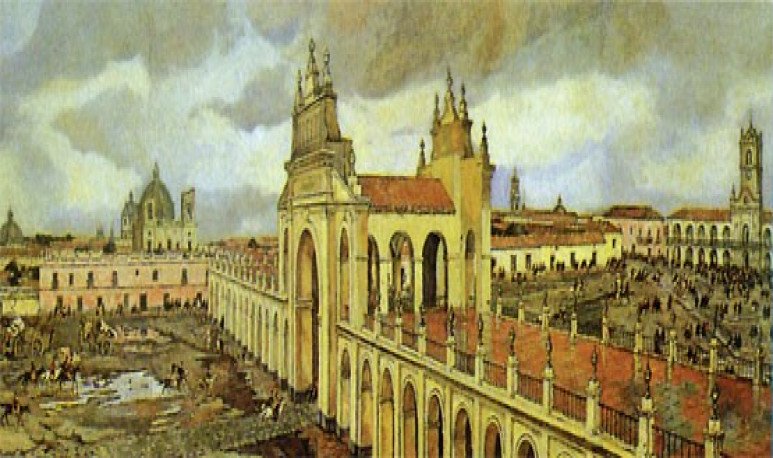 True appearance of the square that preceded the Cabildo in 1810 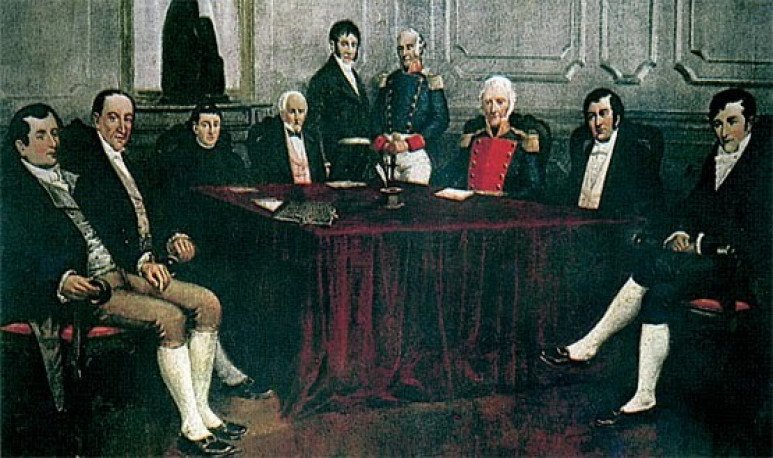