Star format of radio almost from the beginning, the radio theater imposed stories and archetypes that live and revive in popular memory. 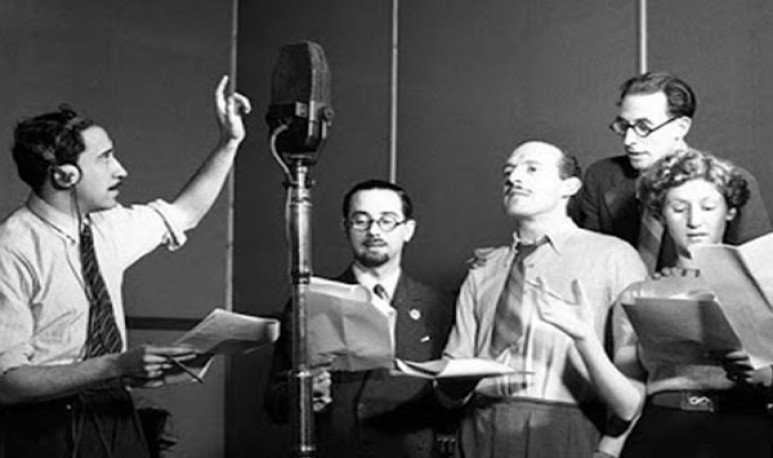 Oscar Casco whispered to Hilda Bernard: “My Mamarrachito”, and the country went even more crazy than when Rolando Rivas promised eternal love to Monica Helguera Paz, or when Martín Quesada cries out loudly: “You are my life” to Esperanza “Monita” Muñoz. While the latter were among the most watched novels on  Argentine television  of the last half century, nothing compares to the ravaging success of the “radiotheatres de las louronas”, such as the derogatory criticism of this popular phenomenon. Let us rescue the 1936   Radiolandia   note, at the dawn of one of our greatest popular expressions: “The performances in cinemas and theaters were apotheotic. Millions and millions of people (sic) lined up in front of the box offices, from many before the show began. And they gave us all the things you can imagine.  Sparks of tradition  was something that cannot be described. On  Radio Belgrano we received, each of the performers, tons of letters every day,” says a perplexed actress Tita Galatro. It was only five years since this classic by  Andrés González Pulido  was issued and that would define the first time of radio theatre. Previously there were attempts to bring the theater to radio, although they were only consolidated in 1929 with Fransisco Mastandrea   's The Hunt of the Wolf  on Radio Nacional , “a radio novel, the first radio play that will not end in a single day or in space of a hearing”.

There inaugurates a golden era of the pampas, with bad guys, stanciers or curators, and good ones, gauchos in general, with some comic counterafigura of  Churrinche 's popularity, and the background of campera music. Schematic figures that were shattered by critics like  Homero Manzi  in  Microphone:  “Where do the authors get these models of such idiotic gauchos?”. However, success makes an immense cultural rise around with magazines in the form of brochures and librettos, even thousands of scores of those pieces are marketed. If in 1922 there were only a thousand recipients, in  1936  there were 1,500,000. If it was broadcast from rooftops in 1920, in 1935  Radio El Mundo — the current building of National Radio  — was inaugurated, the most modern and powerful in Latin America. Already in 1926  Radio Belgrano  had installed subsidiaries in the main cities of the country. On this immense cultural and technological platform, radios would build  the Argentine being  in the vastness of a territory that only in 1947 would reach 15 million inhabitants. And the radio theater was a key piece with those beginnings full of Argentine traditions.

From gauchos to malevos, from chinas to neighborhood girls

Such was the impact of radio creolism, with other authors such as  Héctor Blomberg and Arsenio Mármol, perhaps the most sophisticated of the initial terceto with his  Porteñas Prints, that the cinema of the time adopts those historical melodramas in films from the “Negro” Ferreyra and Julio Irigoyen. Yeah, don't feel so bad  Pol-Ka  and  Underground  to aggiornar old stories of  Alberto Migre  or  Abel Santa Cruz  . Argentina's passion for melodrama breathed by radio theatre, and the explosion of theatrical companies, from the four of the start,  Mastandrea, González Pulido, Casares Pearson-Walk and Arsenio Mármol,  in the mid-thirties we could count more than thirty that were interspersed with productions by the prestigious companies of  Lola Membrives and Leonidas Barletta.

The so-called Serious Theatre had taken note of the new audiences before the usual basebacks who claimed Jaime Yankevich in   Tunonía   : “Where has Radio Belgrano  's cultural mission been?”. Meanwhile, on air you could hear radio theatre versions of  Victor Hugo and Tolstoy  along with  José Hernández and Sarmiento  . The author of radio theatres  Silvia Guerrico  reflected in 1940: “I have traveled towns where newspapers arrive every eight days and books do not exist, but people talk about  Wuthering Heights, Blood and Sand, El ciudano, orRomeo y Juliet  and this thanks to adaptations radio theatrical”

New genres are appearing that enrich the radio theatre around the forties, such as the stories of the suburb of  Jacinto Amenábar  or costumbrist plots of the middle class of Buenos Aires that starts   La familia Pancha Rolón   de Ricardo Bustamente, a national tradition of the mass media that follows with the Pérez García, the Campanelli, the Benvenuto, the Roldán and will continue as long as an Argentine producer breathes. Also the children's radio theatre triumphs with  The Marylin GangandThe Adventures of Yakar and in 1951 he lived its most glorious hour with  Tarzan, the king of the jungle  of  Radio Splendid , who had his own parades with thousands of children and Tarzanito clubs spread in Argentina, Chile, Bolivia, Uruguay, Paraguay and Peru.

Journalist Carlos Ulanovsky recalls: “At the height of Toddy in the afternoon (“Mom, milk has cream”, it was a usual claim) I remember, or so firmly, that I did not miss any chapter of  Tarzan, the king of the selv a, an Argentinian license, transgressive, from the original by Edgar Rice Burroughs. Of that formidable adventure fiction I admired the impeccable sound band and special effects, which really installed us on wild stages and, in particular, who played Tarzanito, actor Oscar Rovito, who was a boy when he joined the cast,” as it appears in his recent book   365000 days of radio. 100 years, 100 voices  of Editorial Octubre.

Death and transfiguration of the Argentine radio theater

The sophistication achieved between the 1940s and fifties, the result of increased literacy, access to cultural property and a powerful cultural industry, millions of Argentine books were exported to Latin America, for example, leads to remarkable productions with great artists like  López Lagar or López Lagar  or  Nora Cullen  that endure in popular memory. It is no accident in that decade the beginning, on July 9, 1950, of  Las dos caratulas, the theatre of humanity,  which still remains in the air of  Radio Nacional  , the longest program in the world, and where the huge  Norma Aleandro, Alicia Berdaxagar, Alfredo Alc& debutedoacute; n and Carlos Carella , or directed the greats of  Armando Discépolo or Antonio Cunill Cabanillas, among others.

The death of radio theater in the sixties was simply a migration to television novels, with the best writers such as  Migré, Celia Alcantara or Nené Cascallar, who recycled old ideas from the more than 800 pages weekly they wrote at full steam, a; a kind of circle closed by the self-absorbed eyes of the viewers,” said the scholar Jorge Rivera. And in these times of anger and quarantine radio theater revives with new media, and networks, available to the  sound imagination of millennials and centennial . Because the radio theatre never went as demonstrated in the eighties Lalo Mir, Douglas Vinci and Bobby Flores, in the nineties  Mario Pergolini,  or in the two thousand Fernando Peña, evoking the voices and ghosts of the Guillermo Battaglia and the Carmen Vald⩓ he'll never leave while an  Argentine radio is turned on.