Brief biography of José de San Martín, father of all Argentines with his work and example. 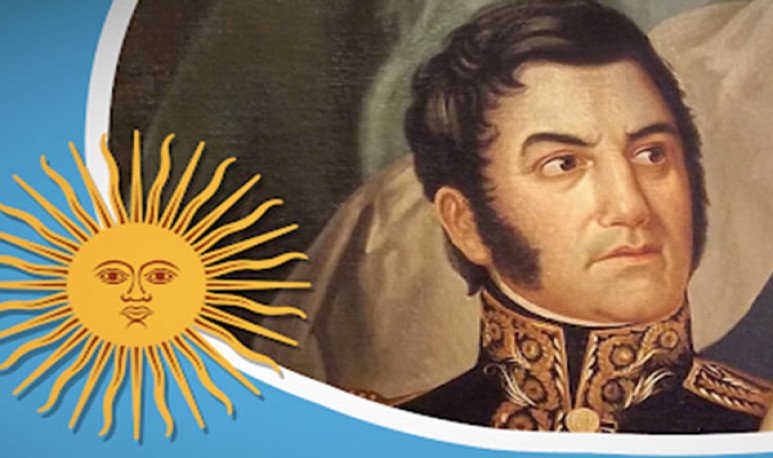 Summarized biographical notes of this enormous Argentine statesman and military, father of the country . Born in Yapeyú, present-day province of Corrientes, on February 25, 1778, son of captain governor Juan de San Martín y Gómez y Gregoria Matorras y del Ser, niece of the Chaco conquistador. After a short stay in his homeland and  Buenos Aires , he departs with his parents and brothers to Cadiz, Spain. In 1789 he entered the Spanish armed forces, where he served in the army and navy, and finished a brilliant 22 year old foja as lieutenant colonel.

By 1809, he resumed his bond with America through the Masonic secret societies that advocated the “independence and happiness” of the New World, with liberal and republican tendencies. Without knowing or fortune, he undertook his return in 1812 with the sole mission of emancipating the Americans from the Spanish colonial and absolutist oppression.He arrives in  Buenos Aires  on March 9 and on March 16 the Triumvirate entrusts him with the formation of a  Regiment of Granaderos  . Argentina had its first modern army. A few months later she married  María de los Remedios de Escalada,  daughter of the Buenos Aires aristocracy, and author of a request of the time she requested support for the revolutionary “arms of the brave”.

After the baptism of fire in  San Lorenzo , the only battle of  San Martin on  national soil, political intrigues pushed him in 1813 to command the  Army of the North,where the famous encounter with Manuel Belgrano takes place, not in Yatasto, but in the Algarrobos post .  A relapse in his recurrent diseases, rheumatism, gout, stomach ulcers and respiratory problems to begin with, forced him to graduate after reorganizing the defense of the current Argentine north with the brave gauchos of  Martín de Guemes  and so many brave Creoles. But most importantly: in  Saldán, Córdoba, he outlines the brilliant emancipatory plan of half the Southern Cone. From 1814 he began preparing as governor of Cuyo the  Army of the Andes  while modernizing the region with economic and social measures.  Mendoza  is born his only daughter,  Mercedes  .

A step towards glory

On January 18, 1817, the bulk of the force departed through the  Pato and Uspallata  passes towards  Chile  , through four mountain ranges, and in one of the largest military and human operations of all time. Twenty days later he was on the slope of  Chacabuco  to fight the first battle and re-establish a Chilean government with  Bernardo de O' Higgins  . And, despite the reverse side of  Cancha Rayada , and the fervent support of the Transandean people,  Maipú's transcendent victory is achieved.That spectacular victory obtained from the clash of 10,000 men, Creoles, mulattos and blacks, against realists, ensured Independence in the extreme south, and deserved San Martín the following comment: “Contingency of war, nothing more” .  One more proof of the grand  captain's modesty and greatness.

Distant from the interlines of the governments of  Buenos Aires , which entered the brutal anarchy of 1820, the general ended up disobeying the orders of his superiors to confront the warlords. In his mind he could only liberate  America  and his hands “would never draw the sword” against his brothers. Two more years it took  San Martín  to gather the resources to arm the fleet and carry out the bold plan to attack  Upper Peru  by sea. Last strong stronghold of the realists, with 23,000 men of experience, San Martín, in addition to 4,700 Argentine and Chilean soldiers, brought 15,000 rifles to arm the Peruvian people. His non-violent strategy had its results, which included a failed encounter with Viceroy La Serna in Punchauca and, on July 9, 1821, he entered  Lima  almost without a shot.Named  Protector of Peru,  there he also started a liberal government, but internal resistance to egalitarian measures, the fatigue of his  Liberator Army  after five years of hard marches and his ideas for a temporary monastic solution.; rquica for the young countries, in order to avoid anarchy, they wore out their power. Before meeting with  Símon Bolívar  in  Guayaquil  , his brother  Libertador  del Norte de America, the fate was cast: he had to retire — despite the fact that he offered himself as a Venezuelan junior.

After a decade of struggles for freedom and sovereignty that we live in, often in solitude and harassed, he moved to  El Chorrillo, Mendoza . There he learned of his wife's death from tuberculosis in Buenos Aires, and decided to emigrate to Europe in 1823 along with the little  Mercedes . This girl to whom she dedicates the famous maxims in Brussels, which are a song to the homeland, men and, moreover, to nature. To avoid being summoned in the disputes of his beloved America, he reinforces his reserved and taciturn character, even more after an attempt to return in 1829 and observe from the ship to  Buenos Aires  in flames. It will never step on  Argentina again.

He suffered serious economic difficulties, forgotten by the governments he had helped to form, until an old Spanish comrade, and his political family, allowed him a sober life in Grand Bourg .  John Bautista Alberdi  says that in 1843 he visited  Saint Martin  in  France:  “Seeing how he considers himself, it would be said that this man had done nothing remarkable in the world, because it seems that he is the first to believe this.Rdquo;.

Died on August 17, 1850, his remains rest in the  Metropolitan Cathedral . Generations pass by, and more is known of the civilian rather than military stature of a man out of his time, eternal, and it is reaffirmed that all the teachings of our  Grand Captain  are the best of  Argentina.