Between the porteños and the Liberator there was never a good thorn. However, San Martín requested that his remains rest in Buenos Aires. 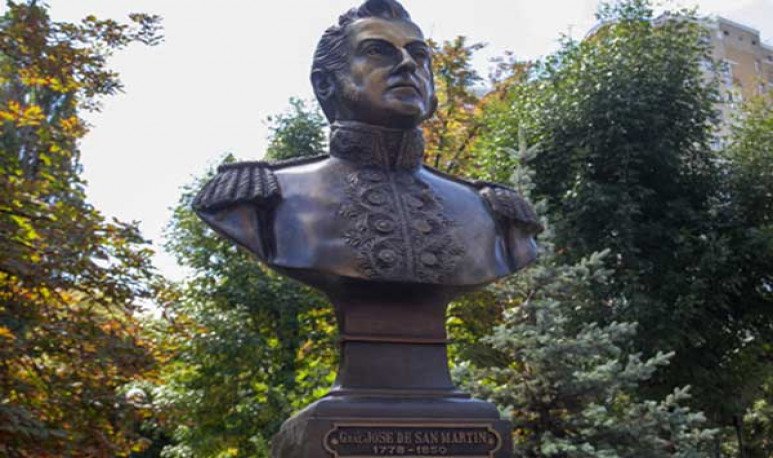 When one knows the last will of the  Liberator  confronted with his history with  Buenos Aires,  one does not understand why his eternal stay in the heart of Buenos Aires. He even went on to confess that “for  Buenos Aires  I will always be a suspect.” He lies in a mausoleum of the  Metropolitan Cathedral,  perhaps to warn the enemies of Independence and Sovereignty, those corrupted by the Power, those who assume the representation of the people for personal purposes, that “in the last corner of the earth that finds me I will be soon to fight for freedom.” Buenos Aires, in the life of San Martin, was an intimate enemy, but also a beacon of freedom that twisted its course forever.

By 1812, with the horizon of the restoration of Spanish absolutism and the firm decision of Ferdinand VII to face the rebellion of the colonies from the following year, a  San Martin  imbued with liberal ideas could not be alien to the revolutionary future of America. And less of  Buenos Aires , which at that time led the emancipatory movements and radiated their ideas to all viceroyalties. This explains why he left a brilliant military career in  Spain  at the age of 34 and arrived in the capital of the United Provinces with a suspicious Spanish accent. It was the months when the porteños contemptuously called “El Godo” who was organizing the first modern  Argentine army,  the Grenaderos Regiment. For this task he had the political support of the Lautaro Lodge, which mobilized the Buenos Aires aristocracy, and gave generously to his young children such as Juan Lavalle and Mariano Necochea, future warriors of continental fame. He also had the support of the entire Buenos Aires Government, especially  Bernardino Rivadavia,  which organized a search for “tall and robust men” in the provinces, highlighting the recruitment of Indians from the Guaraní missions with the clarification that the head of the squadron was “native of that land”. Several came from Yapeyu itself.  Rivadavia  was also one of those who contributed the most horses to the ridden body, being that he was not a man of great personal fortune.

Years later, the effort of the porteños in arming the  Army of the Andes , from war material to medical supplies coordinated by doctor  Cosme Argerich . Of course, in the middle, the distrust of  Carlos María de Alvear  and part of the Buenos Aires bourgeoisie had put him away from the center of political decisions in 1814. At this point, without wanting to extend a point of strong debate among historians, a centralist economic system, inherited from the Colonia and, of course, benefiting the port of  Buenos Aires  against regional economies, was functional. And that still persists, after 200 years...

The unitary constitution of 1819 meant the definitive cut between the continental aspirations of  San Martin  and the interests of  Buenos Aires  to organize a country under its economic might. In line with his republican, though not federal ideals, the general had been maintaining fluid correspondence with  José de Artigas , the mortal enemy of the porteños, the Protector of Free Peoples in the Eastern Band, and with  Estanislao  López, the Santafesino warlord. The words of them and others, such as  Martín Miguel de Guemes  and  Juan Bautista Bustos  , noted the violent attempts to subdue by the armies under the command of porteños. And  Lopez  ended up being crucial in the next steps of the Latin American revolution by apprehending General  Marcos Balcarce  , sent from  Buenos Aires  by Dr. Tagle, when he was to replace him in command of the  Cuyo Army.   San Martin  ignored the orders of Supreme Director  Rondeau  and, again, made a new difficult personal decision for the future of  South America  : he left for  Chile  under the nickname of “traitor”.

Perhaps in one of the saddest moments of his life,  San Martin  in 1820 in Rancagua had to resign from the command of the  Army of the Andes  , which had the order of a non-existent United Provinces.The official reinstated it, but already the campaign for  Peru  was carried out under the Chilean flag. There the  Liberator  officializes his will not return to his homeland by wars between brothers. Meanwhile in  Buenos Aires,  which loses its primacy after the Pilar Treaty and replaces itself in an exacerbated provincialism, the figure of  San Martín   begins to be defamed with attacks in the press, on public stands, and a total ignorance of the emancipation campaign, despite the fact that several of his children were already twenty-year-old generals commanding multinational armies. These are the years of  Rivadavia , whom  San Martín respected despite ideological differences, and who received him in the fleeting passage through  Buenos Aires to board Europe with  Mercedes . Let us remember that there was a certain threat that a court-martial would try him for treason, something that  Rivadavia  's influence could have prevented.

In the times of Rosism there is still contempt for some Buenos Aires circles for the general, although  Juan Manuel de Rosas  encourages the vindication of Sanmartinian ideals. Between them they establish a cordial correspondence from the French blockade of 1838, which was crowned with the corvo saber given to him by  Saint Martin  after his death. It remains to investigate the points of agreement beyond the remanded defense of sovereignty, perhaps both leaders agreed on the resistance and inexperience of our young countries in observing respect for the laws. In the antipodes,  Sarmiento, in Chilean exile, wrote a series of articles about the greatness of the  Liberator , which began to circulate in  Buenos Aires after  Caseros .

Meanwhile, the generation of  Bartolomé Mitre  began to raise it to the level of the  Fathers of the Homeland  , with the inauguration of the equestrian statue in 1862 in  Buenos Aires  . The same literary general began to publish in porteño newspaper  La Nación  his story of  San Martín  in 1875, in folleton format, and with great success. Everything was prepared for the massive celebrations on the centenary of the birth of the  Grand Captain,  which were held in the Plaza de Mayo. Two years later, on May 28, 1880, his remains finally arrived in the city, received with the salvages of ships from various American nations and the Argentine Navy; and as was his last will, almost thirty years after his departure at Boulogne-sur-Mer. For two days, the porteños suspended the preparations of their soldiers, who would fight against the federalization of  Buenos Aires  — and its Customs — in honor of the man who liberated  America  . Two days, no more.

San Martín  's disobedience to centralism sheds a historical light on Argentina  's path, one full of cracks and civil clashes that are not new, nor less painful. His actions also give deep meaning to the American citizen: after the victory in Chacabuco, the Chilean government offered him a silver crockery and a salary of 6,000 pesos a year... San Martin rejected these “luxuries,” and replied: “America is in need and is we need all to help remedy them.”