Home Argentine History Saint Martin in the press of his time

During the years of his glorious passage on American soil and bitter exile, journalism for and against printed the first version of history. 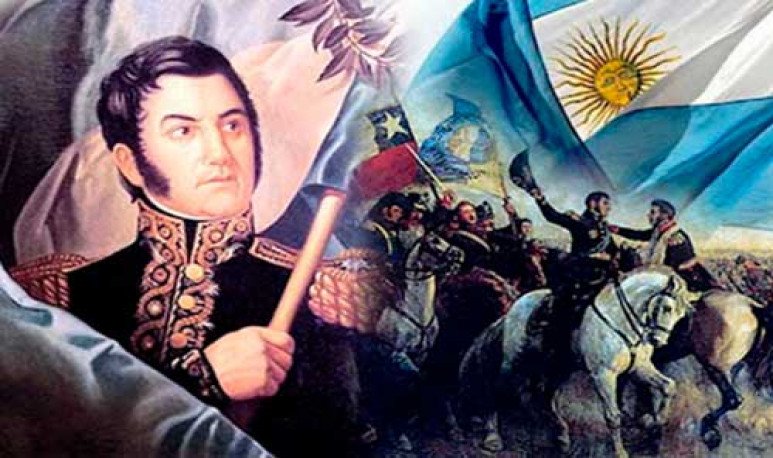 “So the ability that General  San Martin  has shown in organizing a cavalry corps under a perfect military system, coupled with the prudence that must accompany him in order to preserve his strength as a treasure, leads us to expect a happy result for the  Fatherland.” , holds the Buenos Aires press under the title “Army of the Andes” while, more than a thousand kilometers away, it launched the feat. It was January 1817. And newspapers of ephemeral existence such as  La Prensa Argentina, La Crónica Argentina  and  El Censor  , born in full revolutionary effervescence, accounted for the general and his acts assiduously despite the limitations of the early nineteenth century.

Let's say that in Buenos Aires in 1810 it seemed that, where there was a printing press, there was a newspaper. Adding up that decade, and the next two, they came to count about one hundred and four graphic media, not bad for a village. All of them inspired by the words of  Manuel Belgrano  in the  Correo de Comercio  of August 11, 1810: “Freedom of the press is the main basis of public enlightenment.” To this end, journalists of the time were following with great attention the news and their protagonists because, moreover, following Belgrani's thinking about the power of press freedom versus the power of duty, “those who command and send will not only try to command well, knowing that anyone has the power to speak and write.”

Then  Saint Martin , the military man most recognized in his time for his professional achievements and his proverbial austerity, was constantly the subject of scrutiny of that people who wanted to know.That preparation in Cuyo  had dozens of articles, a very special one that included the alleged economic difficulties the governor suffered by donating half his salary. In November 1815, readers of  La Prensa Argentina  could read   San Martín 's statement: “My needs are more than met with half the salary I enjoy; and so...As my prompt request for yours is a token of appreciation... any procedure in matters of raising my salary in intelligence that would not be admitted for how much it exists on earth”, rejecting an increase voted in the Cabildo.

Despite these lines, and the news that came from the Army that the “general will know how to drive with glory to break the chains of Spanish despotism”, there were several enconos to  St. Martin.  A few days before the departure, it was broadcast that I was requesting a higher graduation; to which the general promised in the press with the famous “to resign my office as soon as the Americans have no more enemies.”

From  El Censor  the Liberator defended the  Liberator  and an extensive column was topped with “it is inseparable misfortune from virtue to be slandered by maledicence: it is not strange then to have seen more injured more than once the reputation of General  San Martín : although it is true that in contrast, the healthy, judicious and circumspect world always retains the estimation that privileged souls deserve.” It becomes clear then that the attacks on his figure were ordinary currency.

The same newspaper dedicated the cover to Chacabuco's victories and the “Triunfo de los Andes”, offering extensive analysis, and well-informed reports of popular celebrations in Santiago. He also disclosed the life pension granted to Mercedes, the daughter of  San Martín , something that the general rejected from the plan. What he could not circumvent was the important event that took place in his presence on April 6, 1817 in the building of the former Royal Consulate, the most elegant building in the city, and which was also documented in the press, with the assistance of the most notable personalities in a long day that began.oacute; at three and a half in the evening and ended at ten o'clock in the evening. When he said goodbye, I sent a letter to the newspapers with “General  San Martín  has departed... with the pain of not having been able to visit all those who congratulated him on his arrival. He expects those who honored him, excuse him...”

The readers of Buenos Aires were anxious about the general's footsteps, as evidenced by the detailed article by  La Estrella del Sud  about the  liberating expedition to Peru , quoted by Armando Alonso Piñeiro, and the measures as Protector of Peru noted by the weekly  El Estrella del Sud Sentinel.  This written medium is the qualification of “serious” of the meeting between  San Martín  and  Simon Bolivar  in  Guayaquil  and, then, the enigmatic sentence “we have seen a printed note announcing the return of Mr.  Saint Martin  is said only that it will have important consequences for the cause of America.” The mystery was already served on a platter in 1822. It is also relevant, and looking at the Argentine future agigantes the phrase, the complete publication of the  Liberator  's farewell proclamation to his beloved  Peru  , which in its last sentence finishes the immortal sentences: “The presence of a lucky soldier (for more detachment) is fearful to the newly constituted States. On the other hand, I'm already bored of hearing that I want to become sovereign.” In his homeland on the horizon, after the anarchy of 1820 and the massacres between brothers, with an inevitable war with Brazil for the Oriental Band, the Restorer of the Laws, Don   Juan Manuel de Rosas was seen.  We doubt it was an innocent inclusion of a liberal newspaper.

That question about the form of government also had in the revolutionary press for more than a decade. Only around 1816, with the understandable impulse of  Tucumán,  there were several articles where those journalists, many of them politicians in action, objected to any attempt at monarchical organization, knowing that heroes of Independence, such as  Belgrano or Martin Gemes, even promoted the restoration of the throne of the Incas.  Saint Martin , for its part, was also looking for a strong executive in European crowns, especially in his Peruvian term. That is why it was not unreasonable that in the Buenos Aires press in mid-1830s rumors were spread that the general was operating in favor of a monarchical government in America of Spanish mind. Nothing more false, as evidenced by the profuse letters to Tomas Guido and his confrontation with the delegate of the United Provinces in London, Manuel Moreno. Offended San Martín  with whom he presumed had spread the fallacy, who claims to have assumed “necescuezo commitments” in his liberating  passage through Argentina, Chile and Peru  , puts his fist and letter: “It does very well to take these precautions because by this means he does not cover his honor because, in my sound opinion, it is unknown to you, but his ribs, because he was well resolved to visit them...” and closes the matter that unfortunately perhaps turned out to be one of the origins of  San Martín anti-republican.

Of course, also in those Rosistas years, there were those who remembered the hero in his fair measure as  Sarmiento . The San Juan procerer wrote in exile in the Chilean press the article “Un lieutenant de Artillería”, a vivid account of the battle of Chacabuco and the participation of his countrymen. Thanks to this article, and to the objects sent by a retired in Santiago Juan Gregorio Las Heras, Sarmiento was able to break the reluctance of  San Martín  and was kindly received at Grand Bourg in 1846. Another chronicler who helped to value the Sanmartinian figure, and is essential to know firsthand the liberating expedition since he was there almost since childhood, is certainly  Gerónimo Espejo .  Sarmiento  called him an “archaeologist and military scholar.” Of a long life, with his “Historical Notes” and “Posthumous Notes”, which appeared in the  Revista Argentina  between 1865 and 1866, they became an inexhaustible source for the first Argentine historians of the general,  Bartolomé Mitre  and  Vicente Fidel López.

Along the way we have seen how  San Martín  was made and undone on paper by his contemporaries. Paper that seems less durable than bronze, but that in its veneers the story was inscribed in ink for us to continue writing it.