The proceres dissented in how to organize the country, but not in the love of their land. An Argentina without a crack is on our way. 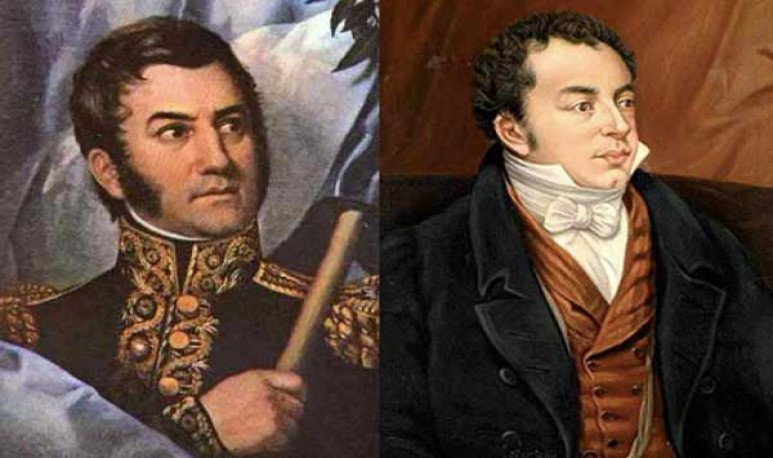 In mid-1823 General  José de San Martín  suffered from an uncertain panorama for American independence during his stay in El Chorrillo,  Mendoza  . If in  Peru  the situation bled out with clashes between Peruvians, a situation similar to that of Chile, in  Buenos Aires  the new political winds had a star in the sky:  Bernardino Rivadavia  . Martín Rodríguez's minister represented the interests of a certain Buenos Aires bourgeoisie, linked to English liberalism, and a republican style of government. In the three years of management, he modernized a  country  where everything was to be done with measures ranging from the construction of a port for  Buenos Aires  , the first of relevance that the City had, to the laws on property rights, individual security, personal assistance, etc.and the promotion of immigration, as well as various activities in culture and education, the highest milestone of which was the founding of the  University of Buenos Aires , near its  Bicentennial .

But this kind of new civil liberties collided with an old acquaintance from Rivadavia, who had had a strong participation in the XIII Year Assembly, and was nothing less thanSaint Martin .  Rivadavia  thinks in 1815 that the “United Provinces and, recently, Chile, possess the titles that can be demanded of a new country worthy of having a current constitution”. A few months later,  San Martín,  who wrote to Godoy Cruz that if he was in Tucumán on July 9 , he would have “thrown the house out the window” of joy, set fire to his lyrics, totally energized, “a course —N. of E. diarrhea in the words of the nineteenth century— gives me every time I see these theories of freedom, individual security, property idem, freedom of printing, etc... these beauties are only reserved for people who have solid foundations and not for those who still can neither read nor write, nor enjoy the tranquility of the observance of the laws... if I did not exist in this province —Cuyo—, the Sanbardos — would have done it by the words of the nineteenth century— that the rest, because everyone is Paris.” Prophetic words of the  Liberator  and our dullness with Europe.

And while the projects of the huge builders of  Patria  were antagonistic, the love of their  country, and America,  united them. Recall that  Rivadavia , once news of the entry of  San Martín to Lima arrived, and despite the reluctance of the Porteños about a show they felt strange — and had indebted them internationally — commissioned Esteban de Luca, our military poet of the Revolution, a Lyric Song, and send to the best bookstores in the world. In addition, he pays De Luca not only a sum of money, something unusual for literary work, but also gives him the complete works of universal poets. Such respect would have an echo in 1823 in  St. Martin  , in the letter addressed to Tomás Guido: “You know that  Rivadavia  is not a friend of mine, despite this, only the accomplished rogues will not be able to be satisfied with his administration, the best he has known in America.”

Of course,  Rivadavia  considered that  San Martín  could be “the military arm that moved the peoples to disorder,” the one demanded by the warlords against the centralist and authoritarian principles of  Buenos Aires  . But he trusted that the  Liberator  would never “draw his sword against his American brothers” and not interfere in the Buenos Aires political fray. And, although I was probably aware of the harassment that  San Martín  suffered after his return from  Peru  , which was not very different to me than he suffered in  Chile  on his way to  Mendoza  , he was one of the few who met several times with the general to discuss the future of budding countries. According to historian Carlos Segreti, it is likely that  Rivadavia  has begged  Saint Martin  not to engage with the European monarchies in order to offer America to its protectorates, an idea of the  Liberator  forever, something that Rodriguez's minister considered “a nonsense to sustain, an abstract theory that has no chance of ever being put into practice in these States”. Perhaps it is time to recognize  Rivadavia  as one of the first defenders of Republican principles against an era that demanded warlords, sabers and blood. An endless age.

Already exiled in 1830, a Rivadavia suffering for  Argentina  torn apart by civil wars, without laws or central institutions, either on the side of the unitary or the federal, recalls the encounter with  Saint Martin  in Europe in 1824, where they continue to discuss two models, and he writes resigned: “Monarchies or princes of Europe and less could be sustained without independence... the upheavals of our country come much more immediately from the lack of public spirit and cooperation in the upholding of order and law by the men of order, than the attacks of the wayward, ambitious without arites or aptitude, greedy without industry.”

In the  United States  post  Obama,  a son of Puerto Rican immigrants,  Lin-Manuel Miranda  , wrote a sweeping musical about  Hamilton  , praising his centralist and Republican principles for the identity of a nation, enhancing his closeness to  Washington , and reversing an image denoated for years by the American left. The crack is much less fearsome, less real, if we start by all means to shake hands, as did several nights  Rivadavia  and  St. Martin  in the house of Bernardino, a warm December 1823.