Historical review and new views of the past are bringing administrative and housing problems. 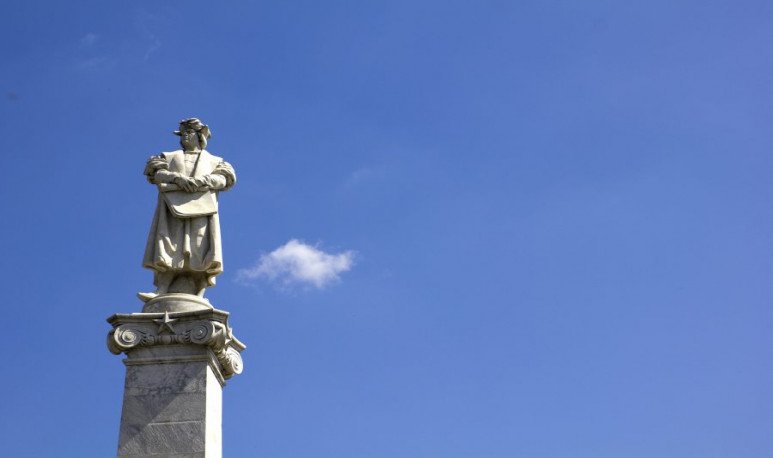 The heroes were already banished from the banknotes when certain aspects of their resumes began to be questioned. Now the turn came to the statues, which are being evicted from their usual locations and must look for other destinations. Let's see what happened to Columbus , for example.

It was the former president who made the decision to remove the previously undisputed “discoverer of America” who was his place of location for more than 90 years, behind the  Casa Rosada . The colón-genocide, then, was dismantled and his new home was under discussion, until it was decided to locate it on the North Coast .  Juana Azurduy , the heroine of Upper Peru , came to its former site.

Juana, after two years of living in El Bajo, could not renew her rental agreement with the new landlord and also had to look for a new destination, where appropriate, the Plaza del Correo, next to the Kirchner Cultural Center.

The controversial statue of Columbus — as well as referring to the years of the colonization of America — is a symbol of another part of our history: great wave of Italian immigration that took place between 1880 and 1960. It happens that the monument was a gift from the Italian community in the country, who felt as a contempt for the movement of sculpture.

As always, everything depends on interpretations: Columbus can be a symbol of those who destroyed native communities on American soil or those other communities that came centuries later and helped make our homeland great. The genocidal or the first immigrant.

Colón-primer immigrante now has a house overlooking the Rio de la Plata , where he spends his days among the planes that go and come to Aeroparque, longing —perhaps — his golden times in Santa María, la Pinta and la Niña .

Judging history with the gaze of the present

The problems we describe above are just a sample of something that happens more and more often : we judge historical facts with today's gaze and that generates inconvenience.  Why? Because to analyze a historical fact it is necessary to take into account its context. There are no isolated facts.

Our culture and values are changing over time, so some issues that were well seen in the past, today are no longer. And it's fine. But we can't pretend to change the past. What happened, happened... I'd say the song. Events must be analysed in their context and, if it is different from what we consider today to be correct, it should be corrected for the future but without denying their importance or judging its actors.

Can we judge with today's rod actions of the past?   We can, but it wouldn't be fair. We must understand that we act according to the values we instill — our parents, teachers; society — and it is difficult to split from that cultural “downline” in which we live immersed. Only a few managed to see beyond the established and find errors even before they are cataloged as such. But most of us are slaves to our context and act according to the values we know. Then it is impossible to correct errors if we do not understand where they come from or why it was acted in a certain way.

Today there is a rise in the so-called  “culture of cancellation” which consists, as the  name suggests, in canceling a person or artistic expression (a song, TV program, film) from the past that does not expose the values we consider today appropriate. For example, one of the most popular streaming platforms recently pulled the film “What the Wind Took Took” from its catalog because it showed an idealized view of slavery and perpetuated racist stereotypes. Let's look at this: although the reasons they set out are true, we must understand that the film was filmed in 1939 and the values of that moment were very different from those of now. But you can't erase the past because that stalled us.  We have to review it and correct it forward, but not deny it.   That is to say that the aforementioned platform came to light and chose to keep the film but with a warning message clarifying that the film “denies the horrors of slavery.” It is also preceded by a video that contextualizes the “racist representations” of this work.