Founded by the May Revolution and its modernizing project, the library in Buenos Aires is an image of national thought both by name and architectural realization. 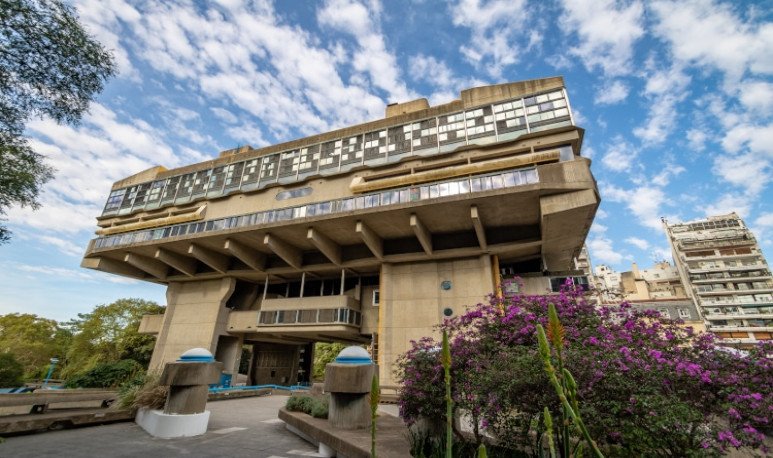 Mariano Moreno and Juan José Paso  were the promoters within the first national government of libertarian measures. Both men were the scholars and worthy of popular trust, in the words of  Thomas Guido . And from both the modernising decrees such as the one that the  Gazeta de Buenos Ayres synthesized as “Education” and which, among other points where they promoted urgent popular education with the Schools of the Homeland, started the life of the    Biblioteca Pública , now  the National Library, on September 13, 1810 , the date  of the Librarian Day in Argentina .

For the story,  Moreno remained, “the light of the patriotic cabinet”, like the founder, although in his time he himself called himself “protector”. This is recorded in an original note dated November 12 addressed to the Council requesting resources for the salaries of two librarians and, arguing, that the library was already planned by the same institution before the British invasions. He had also presented himself with that title when he donated a Latin book to the bibliographic fund, which was essentially fed by  important donations  from other illustrious porteños, such as the humble  Manuel Belgrano  or the great educator Luis José Chorroarín  , plus the expropriation of Bishop Orellana's large library, judged as counterrevolutionary. When  Chorroarín  was director of the Library in 1811 he also mobilized on behalf of the Junta Grande, and Triumvirato, several books of the school where he had been rector, the Real Colegio San Carlos.

As we have guessed from the very beginning, the public library of Buenos Aires accompanied the march and countermarcha of the  Argentines.  Witness and participant. Although the library, first Buenos Aires, then national, does not have the volume of its Brazilian or Mexican sisters, the social importance of its cultural actions and the thought of its directors is not indifferent to society. Let us remember the visceral controversy with the appointment of the last director,  Alberto Manguel , an Argentine writer who practically made his career abroad, and who in 2020 donated his 40,000 library to the Lisbon Library. Or later when anti-Semitic writer  Gustavo Martínez Zuviría , popular Hugo Wast, was in front of the Mexico Street building for twenty-five years. Today, the director of journalist, writer and researcher  Juan Sasturain  will surely print a seal on which future generations will be able to analyze what were the cultural policies, and the thought, of a time.

An architectural gem of Buenos Aires

On the verge of going blind Jorge Luis Borges reneged in a crowded building in San Telmo, which had originally been thought to host the National Lottery. Even some bobbins were lost. An unsuspecting reader would surely think that he was entering a fantastic Borgean story, something not unlike when today we stepped on the  Library of National Congress  between the windows of the old mortgage bank. In those years we began with the search for the final headquarters, the last one in the footsteps  of the Apple of Lights  and Mexico Street. One version says it was the same  Borges  who chose the plot of Libertador Avenue, between Austria and Agüero streets, demolishing the house where  Evita and Juan Perón  lived. The monsters who had moved him from assistant of the  Miguel Cané library in Boedo  to inspector of birds, rabbits and eggs, although an investigation by Jorge B. Rivera never found that directive in official papers, only a warning on issues administrative, which the writer then resigned because of his antiperonism.

The history of the building also has those verdicets of the national pericon. In 1958, the Ministry of Education and Justice formed a commission for the placement and final program of the National Library. The former presidential residence of the fifth Unzué was elected and, due to political turbulence, the overthrow of  President Frondizi  by means, the competition was only held in October 1962. The first prize was awarded by architects  Francisco Bullrich, Alicia Gazzaniga and Clorindo Testa . All of them militated in the currents that disrupted the concepts of modern architecture, with a strong rebel imprint that was close to informalism and pop art. Also new materials, concrete and plastic modules, broke in front of traditional materials. In the training of architects, graphic design and sociology converged towards extremely original points of view. Testa represents very well this hatching and modernizing risk because in its projects the functional organization and processing of the pieces jumps into the void with audacity, there the incredible volumes of the  Bank of London — today Mortgage Bank — in the middle of the city.ntilde; a, twin of the  National Library.

Within the structuralist-brutalist trend,  Bullrich, Gazzaniga and Testa  kicked the board to how a library was designed in the 20th century. Up to that point it was thought that readers should place themselves around, or in contact, the tower intended for books. They proposed to take advantage of the slope of the land, continuing to the urban line and recovering the view of the Rio de la Plata, for which the design buried the deposits and posed on large pillars the volume of the reading rooms. So innovative is the idea that it also provides for an underground space containing more deposits.

So much genius had to wait a decade for its foundation stone, now under the military rule of the self-called Argentine Revolution, and almost two to open the doors, a labyrinthine process, well Borgean, through which three different construction companies passed. Completed in 1992, there are still areas that complete the original project. Only from January 8, 2013, the National Library bears the name of its protector,  Dr. Mariano Moreno.

From its first directors and librarians,  Saturnino Segurola and Fray Cayetano Rodríguez,  to  Sasturain  , the surnames tell us about the gravitation that this chair has in national culture. There were  Marcos Sastre,  the animator bookseller of the Generation of 37, and Mariano's brother,  Manuel Moreno.  Or Carlos Tejedor , in the antipodes of the federalist thought of that generation, then fighting for the secession of Buenos Aires. Also  José Mármol , author of the seminal  Amalia , blind running a library, as did  Borges, Chorraorín and Groussac.  Maybe all of them inspiration for the capital character of  The Name of the Rose of Umberto Eco, so Borgean, of course.

Paul Groussac  was the alma mater since 1885, and for forty years, to give him an unprecedented active role in society, the true intellectual platform of the men who invented the Argentine Nation. The previous career of this son of a good family in Toulouse started from a very young age in education, with teaching at the Sud Model School, right in front of the library where he would later become a long-lived director, and continued as a journalist cult in the  Revista Argentina . There he supported the educational and cultural policies of  President Avellaneda . Appointed national education inspector visited the country, married a Santiago woman, Mercedes Alcorta de Beltrán, and resided for several years in Tucumán.

Disillusioned in a return to his France,  Groussac  returns to the country with the firm idea of becoming an  Argentine intellectual  — although he never gave up the feeling of “writer of two countries, writer of borders”. In those years came the appointment of Eduardo Wilde to the National Library of Buenos Aires. Despite initial resistance due to his foreign character, the director settled in Peru and Moreno's firm with a modernizing plan that included, among other advances, a cataloguing with scientific criteria, areas for historical documents, a law on deposit of every Argentinian book in the library and a public file, which they say was handcrafted. He was the one who, in 1901, achieved the historic building of Mexico Street at 500.  Groussac  imagined a National Library that created an enlightened and critical society by word, and had shocking dissemination projects such as the magazine  La Biblioteca , an influential organ of finisecular cultural diffusion, which was interrupted by the second government of the  President Roca  for his criticism of the territorial negotiations with Chile.

“The library was a chaos of 30 thousand volumes lined up without order, in a secular house in ruins, deprived of air and light. It formed a fairly presentable library there, installed in a comfortable place,” says the same French intellectual about his arrival in the public service, who at the end of the century sheltered 62,707 books, and at the end of his management he was close to two hundred thousand —currently exceed 900 thousand. “Arbitrator, judge and cultural dictator”, defined by Ricardo Piglia, the polygraph Groussac (1848-1929) polemized with several Argentine intellectuals, of all tendencies, knowledge and ages, Bartolomé Mitre, José Ingenieros and Leopoldo Lugons only a few, establishing a dominant figure for Argentines: the  director of the National Library.