Let us follow the sinuous reconstruction of the foundations of our independence and remember a letter from some monarchic porteños. 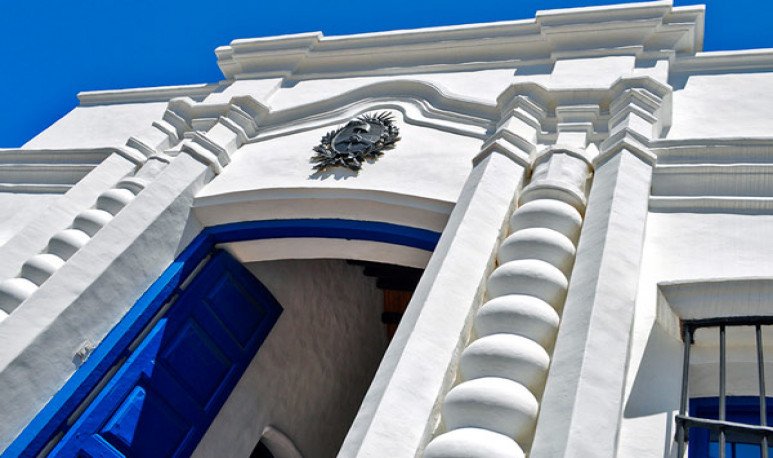 In 1903, the historic  Casita de Tucumánwas demolished.  The sacred precinct of Independence was swept away by the bulldozer of liberal progress, coupled with the policy of denying colonial roots. A picket that wreaked havoc on national memory and, at the dawn of the last century, the cabildos of  Corrientes (another cradle of Argentine liberalism), Santa Fe (source of federalism) and Catamarca disappeared. This tail wind reached until the early thirties, with the collapse of the  libertarian of Humahuaca , and the thousands of modifications without anesthesia in the  Cabildo porteño , which had lost several bodies and had no tower.  San Miguel de Tucumán  had already discarded its first colonial house of civility in 1908. Times changed, men and ideas changed, restored nationalism at the end of the Infamous Decade was ruled, and on  October 9, 1941  , reliable reconstruction was arranged. It was directed by the brand new National Commission of Museums and Monuments and Historical Places led by historians Ricardo Levene and José Luis Busaniche. The declaration of the House as a National Historical Monument was still missing, but the  emblematic site, for both Argentines and Latin Americans , was sheltered for future generations.

The original house was built by the prosperous Spanish merchant Diego Bazan and Figueroa for his daughter Francisca and his son-in-law Miguel Laguna, in the middle of the 18th century, on Matriz Street -today Congress 151. It was a typical manor house, although without too many ornaments except for the Solomonic columns at the entrance, with its entrance hall to a courtyard and rooms around, and connecting to a second courtyard and the outbuildings for the domestic staff. The marriage had a vast offspring, among them Gertrudis, who had rented the house as headquarters for  Manuel Belgrano  's officers during the  Battle of Tucumán (1812  ) Four years later it was still one of the largest tucumans and could house many of the 29 congressmen that came from Buenos Aires to Charcas -current Bolivia- also had a large room 15 meters long by 5 meters wide, specially equipped on March 24, 1816 (sic), and a wide corridor. There,  Argentine Independence would be solemnly declared on July 9 , with versions in Quechua and Aymará, both entrusted to Charcas deputy, José Mariano Serrano. When on January 17, 1817 the last congressmen left the house, carrying in their saddlebags the proclamation to a continental destination, the deterioration and abandonment was the constant of the colonial building, accelerated after the death in 1838 of the three-time provincial governor, and owner of the house, Nicolás Laguna Bazán.

Sanctuary forgotten by the Nation

Gertrudis asked in 1861 for provincial help to preserve a “sanctuary that lies forgotten by the Nation”. The answer came in the form of a purchase of the building as a Post and Telegraph Office a decade later, with the signing of the   President Sarmiento.  Mitre  asked in Congress if the purchase should not have been formulated for a monument and not a state office. No one heard. Towards the 1880s it began to be a point of civic pilgrimage, and the first commemorative parades of students in the country. However, inside, “the hall of the historic sessions remains closed and empty and when travelers come to visit it with reverence the guardian of his keys, citizen Borja Espejo, shows a room bleached, humid and covered with dust”, in the words of the then Director of Post and Telegraph,  Stanislao Zeballos , and recovered by Mario Tesler from the National Library.It was then that  President Pellegrini  decided to withdraw the public offices, whose chiefs had made severe modifications even with a neoclassical façade (sic), and commissioned report for improvements to Tiburcio Padilla, the first to deal with the fate of the house in 1868, and Ángel Carranza.The next president,  General Roca,  ignored a the first report recommending the restoration and ordered the complete demolition minus the Sala de la Jura, which was imprisoned inside a pavilion of French architecture. In front there was an atrium with palm trees, designed by Carlos Thays, and a large fence with side walls and reliefs of  Lola Mora  - currently in the Courtyard of Homages of the Casa de Tucumán. With great fanfare, the president inaugurated it on September 24, 1903, the date of the  Battle of Tucumán,  with the curiosity that in the bronze reliefs of the sculptor  appears a congressman of 1816 with the face of Roca.

Workers and artisans of the National Directorate of Architecture, under the direction of the architect  Mario José Buschiazzo , who had previously rebuilt the Buenos Aires City Council (1940), began in April 1942 by demolishing the pavilion. It was then guided by the reconstruction of the classic shots of Italian photographer Angel Paganelli of 1868 -photo-, the descriptions of  Paul Groussac  and the plans that were preserved from the purchase by the state almost 70 years earlier. Such precupation of restitution of the original house meant the national search for tiles, pillars of quebracho with their shoes, bars and doors of houses demolished from the 18th century. The painstaking historical and architectural works ended a year later, and another  September 24 returned the House of Independence . And we can all accompany the patriotic congresses in the Tucuman capital today inviting us, and remembering, “the high character of a free and independent nation”

Much of the official history repeats that the Porteños congresales brought the first republican and democratic ideas to the Congress of Tucumán. And that it was those of the “ Cordoban party”, allies of José Artigas , who disarticulated such an outstanding enterprise. And there they lay the egg of the snake that would dominate future Argentines until Caseros and beyond. Let's read deputy  Tomás de Anchorena  in a letter to his brother Juan José, both rich merchants and landowners in Buenos Aires, “I receive many expressions from  Belgrano  who came to this day. Yesterday -July 11, 1816-  Pueyrredón marched to see San Martín in Cordoba . I left it to  Belgrano  by General's office but he asks for the rules by which he has to send and fund,” he says of a crucial moment on the path to Latin American freedom, and complete, “you will know that it was agreed to publish our independence in the middle of a manifesto commissioned to Bustamante, Medrano and Serrano.  It is a form of government, and the Constitutional Monarchy is very well received in Congress and people, restoring the house of the Incas.  The three ideas have been suggested and agitated by  Belgrano -  N. of R.  Supported by San Martín -  and those imposed by foreign relations -N.  Rivadavia? Irigoyen ?- consider them very important. What has no doubt is that, if thought is realized, the whole of Peru is moved, and Lima's greatness will take sides in our cause, free of the fears caused by the democratic stunting”, concludes Anchorena, who several years later would abjure such a position in letters addressed to his  cousin, Juan Manuel de Rosas . Perhaps it was an upstart to the general monarchic climate of Congress, or the fear of reprisals from the federal liguism, or “we must all sacrifice ourselves as a gift of order.” The truth is that a descendant of the Inca dynasty of the Yupanqui was the true possibility of a United Provinces in South America more united than ever. Even for the people of Buenos Aires.

The House of the Father of Democracy