A return for the joy of children who did not beat television, video games or smartphone. And COVID-19 won't win either. 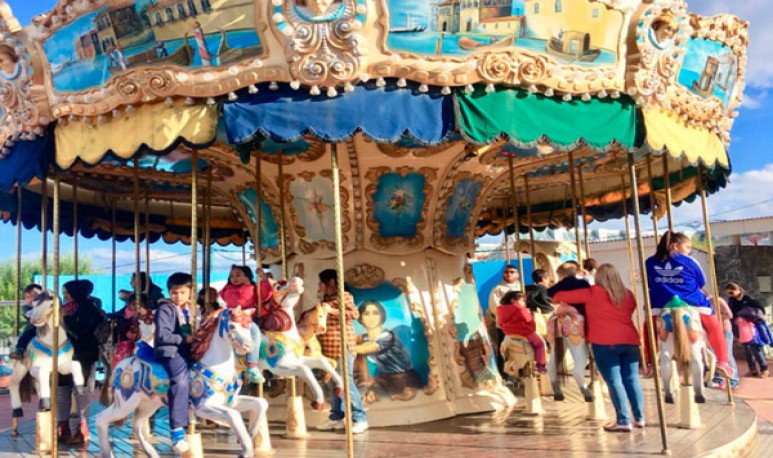 They say it was invented by the Turks and trained their warriors before the Crusades. That the embellished Christian knights wore Arab models, without platform, with horses on beams, and rotated driven by horses. It was a Sun King, Louis XIV, who installed it in a palace at  Le Grand Carrousell, and ended up being a family amusement with the French Revolution, guillotine through. It still kept in its etymology a past of war, “carousel” comes from the Italian “garosello”, translated into Spanish “carosela”, and meaning “first battle”. It went to animal and human blood, there was a French bicycle model in 1855 and Argentine in La Pampa in 1922, and was renewed with the steam revolution and the explosion of the gas and electric engine.

And he arrived in  Buenos Aires  in 1867 in the neighborhood of Parque -today Plaza Lavalle-, from Germany, with several names, “merry-go-round”, English, “merry-go-round”, Spanish. The porteños imposed “calesita”, which derives from the “let's play the calesas”, a traditional carriage ride in the middle of the nineteenth century that went around a city more of land than of cobblestone. Then came the “going to the calesero”, mostly Spanish immigrants who were pioneers in this popular entertainment industry, “calesitero” and, finally, in the ten, calesita.

They say that when  Sarmiento  was President of the Republic they installed a little street in front of the house. The passage of the horse with blinkers was accompanied by music of an organ. Law enforcement officers went to intimidate the owners to move the family game. When the president heard the scream in the sky and reproached the restrained policemen, “I find it beautiful to hear the laughter of the boys near the window”

Children on horseback, children to fly

Let's clear up a difference for the law men. In the  carousel  the figures are fixed while in the  carousel  we have the horses going up and down. That said we have that the  first argentine  monkey was created by the Frenchman Cirilo Bourrel, and financed by a Spaniard, Francisco Meric and de la Huerta, in 1891. It worked in Vicente López square with steeds, chanchitos and swans manufactured in our soil. For the  first argentinian carousel  we would have to wait until 1943, when CUMA -Ultramodern Argentinos-, a famous Rosario factory of calesitas by the Italian brothers La Salvia, was commissioned by Sequalino Hnos for a location in the Federal Capital, on Avenida Rivadavia and Hidalgo. Soon it is transferred to the Zoological Garden and becomes one of the greatest amusement in Palermo. And it's still spinning in Ayacucho. In 1978 Oscar Lema, its last landlord, sold this Historical Cultural Heritage of the Province of Buenos Aires to the Lions Club on the condition that he could not leave the country, and that they should keep it in condition. Renowned artists embellished this remarkable piece, with carvings by the great Italian craftsman Rípoli and screens of illustrations inspired by the cartoonist Rodolfo Dan, on long days in the Rural Society, before its destination 240 kilometers from its opening point.

Sequalino Hermanos worked on Alvear Street in Rosario. He was another attraction in the neighborhood with his wooden horse at the entrance and disappeared with the factory in 1984. Juan, Andrés and Roberto Sequalino were the owners, and they worked with Rípoli, Russo and Herminio Blanco. They produced calesitas powered by electric energy although even in the thirties they sold models on horseback for “the lost towns” No  Argentine boy  was left without his return. Nor in the countries of the continent because they exported to Peru, Paraguay, Brazil, Uruguay and Chile.

In 1936 Carlos Di Gregorio joined the industry, who began to carve a more realistic version of horses than the European one with bulging, rounded eyes. They went out to ride credible argentine wooden penos in the hands of girls and boys, who also enjoyed before anyone else in the world of the  ring, another national invention . Campo and City are twinned in the calesita with the ring that takes up the game of the gauchos.

One of the characteristics of our calesitas is the nomadic spirit. There are several that go from here to there, for example the one that currently entertains in Buenos Aires Park Avellaneda before turned in Misiones and Santa Fe. In Buenos Aires, a first motive was a 1919 ordinance, with restrictive clauses and condemning the activity. It was only in 1955 that almost a hundred cals in the city's radio received a special permit that allowed them to work until in 1965 the ordinance was repealed and a renewable fee system was granted every five years. In the nineties, the mayor Saul Brouer intended to bid all cars in squares and set up various private enterprises. When in 2002 the documents were finally in conditions of public offer, the government of Anibal Ibarra now declares the beloved Calesitas as cultural heritage. This ended the precariousness of almost a century and preserved the memory of several generations.

An example of the transhumant life arises in the trajectory of the  chaumer Domingo Pometti  and his family. In 1944 he bought the remains of a horse ride and he himself repairs the broken games, improvising the missing ones, with the ingenuity of a car made of a barrel. There began the perigrinage through wastewater and hollow as usual, one of the most walkers was probably  Ramón Pampín  who between the thirties and sixties with “La Porteña” did not leave the neighborhood of the capital and Greater Buenos Aires unhappy. Over the years Humberto, son of Pometti, ran a family business that made carves, and carved his own figures, in Emilio Lamarca and Elpidio Gonzalez. A line of calesiteros that continues Carlos Pometti, general secretary of the Argentine Association of Calesiteros and Afines porteños, and who represents the 53 still existing. Carlos also owns two carts, one in Pompeii, which has been touring since 1939, and the other in Villa del Parque.

Among the notable callers in  Buenos Aires  we have Luis Rodríguez , who after going thousands of tours around the country, in 1965 installed in the courtyard of his own house a built by the pioneers Bourrel- Meric and La Huerta. Seventy-five years had Don Luis with the ring, which he designed artistically, or repairing the strollers with a safety system in case the children got stuck with their little feet. Or with the memory of other times, one of the horses in his little horse is called “Rubio”, in homage to a pony who threw the version in blood. His godson José Luis continues with the illusion on the corner of Ramón Falcón and Miralla, between Villa Luro and Liniers.  In honor of Don Luis, the Day of the Bachelor is celebrated on November 4.

Another is  Tatín de Parque Chacabuco , who took the name of a famous comedian from the sixties who had a program where he wore the ring as a prize.  José Sciarrota, Don Pepe  for the piberío of La Boca and Barracas since 1944, said “ I always open the carcass even if it is for a boy, because a child in the street is a child who will not be on the street”  The City recognized him as a Featured Citizen, Exemplary Neighbor and the name of Don Pepe to a sports centre, the only one that bears a fantasy name of the officers.

Popular culture reserves the calesitas, and their calesiteros, a unique place. The tango “ La Calesita” by Cátulo Castillo y Mariano Mores  of 1953, inspired by the one that still works in the 1st square of May, is a fundamental piece in the history of the genre because it was the simple one with a famous B side, “Taquito militar”. A decade later he served as the source for a film by Hugo del Carril, starring a chauffer and the memories of a sentimentalized city between 1890 and 1919. Movies with  Sandro and Susana Giménez , video clips with  Los Babasónicos, and thousands more native references can be cited from this eternal springboard to fantasy. “You can imagine that you fly, you can imagine that you gallop,” is the phrase of the guild of the challeros.   In these  days of the running of the bulls,  we hope to turn off the virtual rings, and to live the adventure again on top of a noble steed of a thousand races. And smile at the chauffer with the happiness we'll never erase from that free spin.

The Mad with the Calesita

The sad end of a little street