The meeting between Simon Bolivar and José de San Martín, which marked the fate of a continent and a disagreement that continues between us. 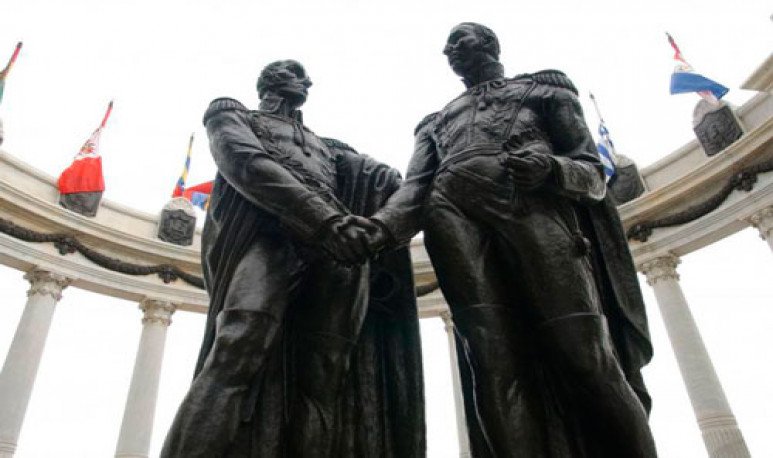 We have an Argentine  Liberator  who arrived victorious in Guayaquil, the city that cheered in July 1822 the stay of an untamed Venezuelan Liberator. The stage was ready with drums and cymbals.  “ America  will not forget the day we embrace”, the Roman emperor-style laurels, prepared by young Ecuadorians, were in the gateras while the eyes of the great European powers looked with suspicion. San Martin-Bolivar. Bolívar-San Martín .But when the curtain fell, one left without return and the other left to complete Latin American Independence. That same year “ the mystery of Guayaquil ” was born, or one of the great national zones in the words of Arturo Jauretche.

Because of mystery it has little and nothing. Even because it was revealed in letters from those involved, by some close confidants such as Tomás Guido, in the case of San Martín, or General Santander, on behalf of Bolívar. Let's go to the test relay. One of the most powerful is the degree of physical and moral exhaustion of the  Argentine Liberator , then Protector of Peru , with a decimated army after his departure from Mendoza in 1817, and resistances both in the high society of Lima and in the Government of  Buenos Aires . San Martín  was aware that for the final blow to the realists, who still resisted heavily armed in Upper Peru  , needed the disciplined and powerful army that had recently triumphed in the Colombian Waterloo, the Battle of Carabobo.

Another is the difference between projects. While both agreed that the young Latin American countries would not resist  democratic republics , they differed in the form of government, since  Saint Martin preferred a monarchy of European descent. Instead,  Bolívar  insisted on centralized power in the hands of compatriots. Finally without agreement, perhaps with some bittersweet taste as he expressed his desire to accompany the end of the liberating wars, even if it is under the orders of  Bolivar, San Martín  decides to begin his self-exile. First in  Mendoza,  where he was spied and harassed from  Buenos Aires  , and then in  England, Belgium and France,  under the famous maxim “my sword will never leave the pod for political opinions”

Sarmiento, in his speech to the Historical Institute of  France  in 1847, after having spent several evenings in Grand Bourg with the elderly general, commented on the encounter in Guayaquil based on the difficulties of the  Army   Sanmartinian and ideological differences. The presence of  St. Martin  himself is proof that the mystery was over.However, this very decisive fact is hardly mentioned. Since 1822, the Buenos Aires press had already spoken of the enigmatic departure of the Correntino patriot ( El Sentinel, November 18,  1822, AGN).And then  official national histories  such as  Bartolomé Mitre  did nothing but continue with this story that deepened differences rather than agreements. Perhaps both his contemporaries and successive generations could not understand two men who risked for freedom and sovereignty, beyond personal interest.

One the strategist,  San Martín , who practically liberated half of South America with very few battles of magnitude; the other, Bolivar, a reckless revolutionary of a thousand battles. One, austere, extreme rigorous, laconic but true words. The other, an orator artist, an exhibitionist who also said, “If any man becomes essential to a nation, that nation in the long run will not exist.” Both authentically  Latin Americans  with their flaws, fearful of anarchy and laziness, although in solidarity with their hopes and in the dream yet to be realized of a united America.