Large numbers of the survivors of the Battleship Graf Spee arrived inmates, then they were prisoners of war, and, families by, adopted nationality 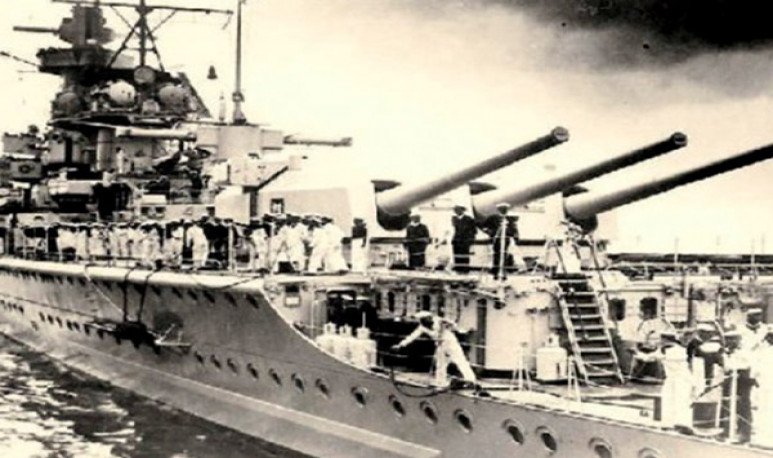 The hazy eyes of the young Germans who came down from the Tacoma freighter surely could not believe that a few days before they had seen their beloved  Admiral Graf Spee  swing on the orders of Captain Langsdorff. They are hosted by the Argentines as boarding schools, just as the previous war had interned the English officers and crew members of the “Eber” gunboat and the auxiliary cruiser “Cap. Trafalgar.” Under the Argentine neutrality established by   President Ortiz ,  the Third Reich sailors were also protected by the good treatment of shipwrecked belligerents landed in territory neutral, according to international agreements of The Hague (1899) and Geneva (1864). They went to the  Hotel de los Immigrantes  for a few weeks without knowing what decision the Argentine government was going to make while remembering how they had resisted the onslaught an hour and a quarter of three ships of the English and French navy on the Uruguayan coast. 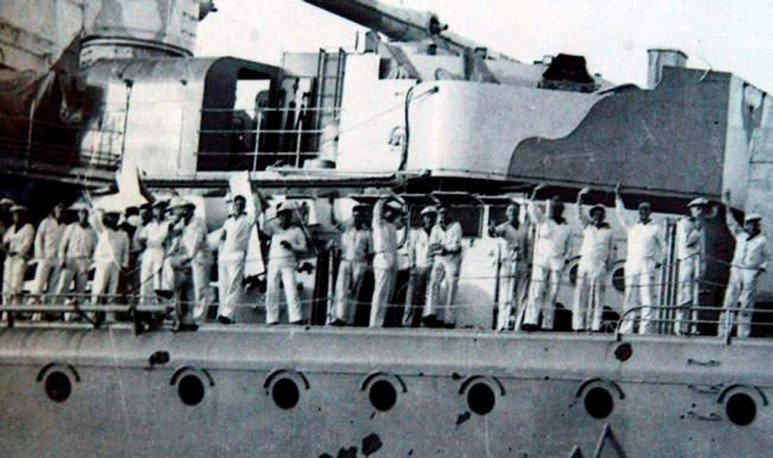 Many of them, most of the humble professions such as postmen, carpenters and labradors, had been on board since the launching and accompanying him in the assistance of Nazi Germany to Franco's Spain. This  Panzerschiff  (armored ship) of 12 thousand tons, no faster than enemy cruisers but with larger range guns and radar, had been vital in the supply of the German Condor Legion on the Iberian Peninsula. In the  Spanish Civil War  he had also proved his potential in the tactics of corsair ship, and sank several Republicans. That is why it was destined to the South Atlantic in the months leading up to the invasion of Poland, where it remained undetected until British supply vessels began to sink. It is estimated that he sent over 50,000 tons. Immediately under the command of Commodore Harwood, two heavy cruisers were arranged in the area, and two light cruisers, which would make their powerful cannons roar at the  Battle of Rio de la Plata on December 13, 1939.

Unlike Harwood, an English veteran marine who knew the South Atlantic very well, and brought a “mousetrap” to  Graf Spee , the unwise Langsdorff of the Rio de la Plata and, less, his policies. He preferred the port of Montevideo to recover men and the ship, which had not been seriously damaged, not his rival  Exeter,  who had to retreat steaming towards  Las Malvinas.  What this Nazi officer did not know was about the alignment of the Uruguayans with the Americans and the English, even before Latin American nations formally declared war on the Axis. He kept bitterly remembering the future naval Edecan of  President Castillo , Eduardo Aumann, on a quote from Juan Bautista Yofre, who should have gone to  Puerto Belgrano , or continue to chase the  Exeter until he plunged it. It only comforted the captain who had finally saved the lives of 1055 men.The day after the meeting with the Argentine military, he decided to end his life with a Mauser pistol, and his remains are housed in the German cemetery in Buenos Aires.

In January 1940 now the ones amazed were the Buenos Aires with these uniformed young Germans who were walking around Florida. As Argentina was a neutral country, it had no obligation, in principle, to confine or detain internees, but should only prevent them from returning to  World War II . However this is complicated by suspicious activities that several of them begin to develop under the umbrella of the Germanic Bank of South America and the German embassy of von Thermann. The drop that overbaled the glass was the attempt to escape from the North Dock. It is therefore decided to intern the chiefs and officers in Buenos Aires and Greater Buenos Aires, and the rest of the sailors in Mendoza (150), Córdoba (250), Santa Fe (200) and San Juan (50). The eight health professionals who start working at the German Hospital are exempted.

More than two hundred qualified sailors, including officers and capos, arrive in  Martín Garcia Island  and are located in the Officers Casino of the Preparatory School of Junior Staff, abandoned since the stay of the deposed person.  President Yrigoyen  in 1930, and an elementary school near the pier. There are several attempts to escape until 1942 and the controls of Argentine soldiers are intensified. However, some Germans have special licenses and integrate into the daily Buenos Aires as teachers and mechanics. With the unclear attitudes of the German ambassador along with the actions of a small group held in Florencio Varela, which was regularly visited by nationalist military of the coup government, in 1944 it is stipulated that all  Graf Spee  officers should be held in the “Club Hotel” of  Sierras de la Ventana,  in the province of Buenos Aires.

Different was the fate, and also the attitude, of the sailors in the Interior. Many of them were welcomed with a lot of hospitality and sympathy in the villages. For example in Mendoza they find work quickly and begin to live in private homes until they are concentrated again, and work, in a vineyard in Godoy Cruz. In Cordoba, in Capilla Vieja, Department of Calamuchita, they build a building 50 meters in front, unique in the area. Others in San Juan are engaged in the successful breeding of horses and pigs, and are especially remembered for heroic gestures during the  1944 Earthquake . From their own pockets they cost in Santa Fe the recovery of the Campo Funes and Quinta Ocetti grounds, which then pass to the Argentine government.

Due to pressure and complaint from the British government, a gradual concentration of internees began in 1944, with a maximum of 350 soldiers held in Sierras de la Ventana . Not only are these Germans operating a hotel that was abandoned since 1917, but they are also a tourist attraction with their musical and acrobatic performances in  Torquinst and Coronel Suárez . The Creole adventures of the local German hierarchs will be the basis for the stories that they were the  escape bridge of the Nazis to Argentina , as it appears in  Jorge Camarasa's “Odessa al Sur” , and that with this cooperation all wanted to escape from the country.  prisoners of war  with Argentina's formal declaration against Japan and Germany on 27 March 1945. However, it seems to contradict a news from September 1945, recovered by journalist Juan José Flores, where it can be read, “a crew member of the former pocket battleship  Graf Spee  has decided to marry in our city... according to our informants his fiancée, who met in  BahÍ to Blanca , is in  Necochea ... after doing the paperwork in the civil registry office... he will return to  Sierras de la Ventana where, together with several other colleagues, he complies with the measures mandated by the national government... and there he will wait foraacute; the date indicated for the wedding”

When September 1945, the government of  de facto president Farrell,  with the signature of Perón, Cooke and Hortensio Quijano , provided for the repatriation of prisoners Germans, except those who “with a good record, want to stay with their Argentine families,” the English ambassador and the American chargé d'affaires will be flatly opposed. Our rulers give in to no longer deteriorate relations battered by historical national neutrality during the conflict. On the English ship Highland Monarch they depart on 15 February 1946 and must wait two long years for the Allied Command to allow the return. Wives and children waited. And they,  mostly came back.

The presence of a thousand German soldiers on Argentine soil caused it to fuel domestic and foreign policy. Foreign Minister Cantilo promotes an unprecedented rapprochement with the United States in the Panama Declaration of late 1939, before the collapse of  Graf Spee . A 300-mile security zone was thus established around the hemisphere, although, maintaining its iron neutrality,  Argentina  refuses to patrol. However, the national army reinforces border posts and rivers. Secretly, Congress voted on a law for the purchase of armaments and the expansion of military manufacturing.

A few months later, the radical convention takes place in the room “La Argentina” and it is reported that alleged radicals from Cordoba advertise in the  Nazi daily “El Pampero ”.  Former President Alvear presents the motion to repudiate Nazism, denouncing the “reproachable action of the co-ligionarians,” and immediately fly chairs to the stage. This does not prevent the radical democratic leader from exclaiming, “the battle that the world is currently waging is more than a war between nations.. it is a war of ideologies... governments must be neutral until the territory of the homeland is plunged, aggravated its sovereignty, or put intodanger social dignity... The radical party is a party of struggle, and if they want us to go, we will go to the fight,” he closed in the middle of cheers. Entrerriana  Mika Feldman de Etchebéhère,  the famous Trotskyist Captain of the Spanish Republicans, reproduced these words in “Free Argentina”, quoted by Andrés Bisso, and added the words of  deputy Raúl Damonte Taborda,  “in what is it?what has been the explanations required of Germany for the sinking of a ship our - Uruguayan merchant - in the present war? Mystery. What they claim strict neutrality supported one of the belligerent countries in the Chaco War, introducing discord into inter-American relations. Those who demand neutrality do not hesitate to wear uniforms to the totalitarian embassy and look indifferently at the growth of Nazi propaganda in our territory What has our government done to suppress Hitler's pseudofeud of Misiones? What are  Graf Spee sailors doing? How many have mocked police surveillance and are engaged in their work as Quinta Columna - the sad Franco infiltration in Republican Madrid -... in this war two systems collide. We can't be with the one who denies all human freedoms,” he ended up with an Office of Administration and Roles of  Graf Spee , in charge of Commander Kay, who from the central 25th of May 146 served as a node of German espionage in Latin America.