Reserved in his trust, St. Martin had few whom he defended against slander, in the case of the priest, or confidants like Tomás Guido. 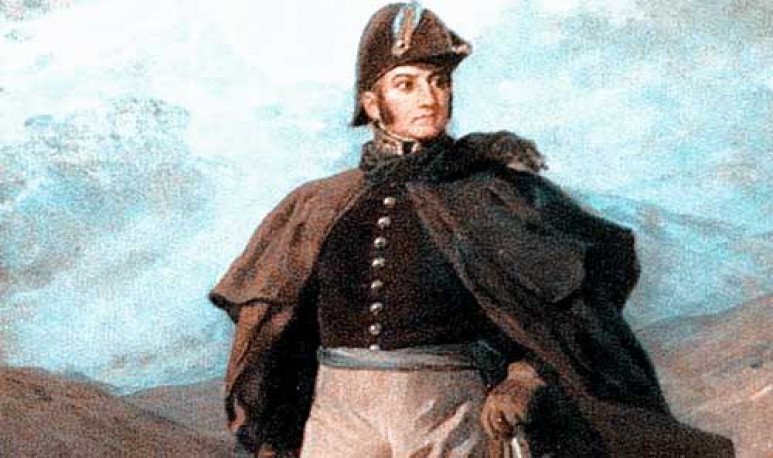 It is known that  José de San Martín  was a man reluctant to enter into relationships. He attached to austerity and discipline, warm instead between home as evidenced by his intense family ties, among his contemporaries he commented that he hated the life of society and the theatrical gestures of the rules of courtesy. There the difficulties of finding for current historians many affective ties that break the bronze mold. That is why remembering the few who entered their circle of trust serves to give a human look detached from the cardboard. And, in addition, to widen recognition to our founding fathers who led a revolution.

When  Friar Luis Beltrán  returned to his native land of Mendoza, persecuted along with the Chilean survivors of the  Rancagua  disaster, General  San Martín  wanted to internalize this curious friar through  Bernardo de O'Higgins  . The Transandean military had an ambiguous position on who had been chaplain to the supreme director José Miguel Carrera, a rival of the patriots because of his particular interests in the American revolutions. Even in 1814  O' Higgins, Juan Mackenna  and other Chileans independistas signed a document addressed to  San Martín  asking for the prison of Beltrán and more career people present in the  Army of the Andes  , especially the religious syndicated directly into the ruin of the Chilean city of Concepción. On the other hand, he recognized his extraordinary contributions to military engineering and his knowledge that exceeded mechanics and even reached the design of combat clothing. However, the   Liberator   's smell could more and not only appointed him chaplain of his nascent force based on the “cuyana insular”, but he promptly left him to charge of the Park and Maestranza in  El Plumerillo . In the midst of the desolation of the place,  Beltran  became a legend and was the  Vulcan of the Army  , the  Major Forcer of the Arms of the   Independence of America  .  Bartolomé Mitre says: “In the midst of the noise of the hammers that struck between seven anvils and the limes and saws that squeaked, directing at the same time 300 workers, each of whom taught his craft, his voice almost died out when he forced it, and he became hoarsened until the end of his days.iacute; as”.

They say that, when asked by  Saint Martin  for how to transport war material through the mountain ranges, the immutable Friar replied: “If the cannons need wings, they will have them.” He accompanied the libertarian passage in  Chile and Peru , melting cannons even during the marches of the troops, and reached the rank of lieutenant colonel preserving his Franciscan habits. He collaborated decisively with the victories of  Junín  and  Ayacucho  side by side with the  Bolivarian army  , both battles the long-awaited end of American emancipation, but suffered from the insults of  Bolivar  himself that brought him to  Buenos Aires. Aires  with Gerónimo Espejo, at the behest of  San Martín  . Once returned, he contributed to the manufacture of weapons for the defense of the  Uruguay River  and was with the troops of  Carlos María de Alvear  in the battle of  Ituzaingó  against Brazilian imperialism, but his health was severely affected. He died in Buenos Aires in 1827 and his remains are found somewhere in the Recoleta Cemetery in Buenos Aires.

Closest in the affections to  St. Martin  was undoubtedly  Tomás Guido  . Distant cousins, both patriots, their relationship begins in  Buenos Aires  in 1812, not in London as the traditional version according to Ricardo Piccirilli, and with the unnoticed arrival of the lieutenant colonel along with other Americans, as the Argentine diplomat Manuel Moreno wrote from El Viejo. Continent: “In George Canning go friends  Larrea, Aguirre, Zapiola, Alvear, Vera, Chilavert  and a few other officers escaped from Cadiz”. In the “how many officers” was a  José de San Martín.Over the years, and the common interests of a   Patria Grande,  the relationship grew ever closer, not only in feelings, but also because of  Guido's extraordinary military and diplomatic skills.It is well known that the strategic advice of Tomás had a strong influence on the Sanmartinian Continental Plan, and that it was essential to convince the Supreme Director Juan Martín de Pueyrredón in the support of the United Provinces to the governor of Cuyo, and the promises of a great ejé . is in the making. His subsequent diplomatic efforts in  Chile and Peru were important, in what was actually Colonel  Guido the “faithful lancer” of  San Martín.

Not only did the  Liberator  recognize  Guido  's talents in diplomacy, but from  Rivadavia  to  Urquiza  , through  Rosas  , they requested his services and was a high representative of national interests in the world. In the meantime, an intense correspondence continued with  Saint Martin  , exiled in Europe, sometimes trying to write a long-awaited memoirs, and came to offer his “weak pen”; others serving as a privileged source of information on the misfortunes and fortunes of a young nation. It is enough to see the strong bond of love between these great men that  San Martín wrote to Guido  while he sensed a painful ostracism behind  Guayaquil  , aboard the frigate  Belgrano:  “My friend: you accompanied me from Buenos Aires joining your fortune to mine. We have worked in this long period for the benefit of the country as much as we could. I am separated from you but with gratitude, not only for the help you have given me in the difficult commissions I have entrusted to you, but your friendship and personal affection have softened my bitterness and made me more bearable my public life. Thank you and thank you and my appreciation.” His remains, along with those of  Juan Gregorio de Las Heras , rest next to the ashes of the   Liberator  in the  Cathedral of Buenos Aires . America greets and recognizes them eternally.