Home Argentine History Faces and masks: I know you, mascara

In October 1898, a magazine that is still remembered by Argentines began to circulate, although it ended its first period in 1941. A wayward Friar, his soul. 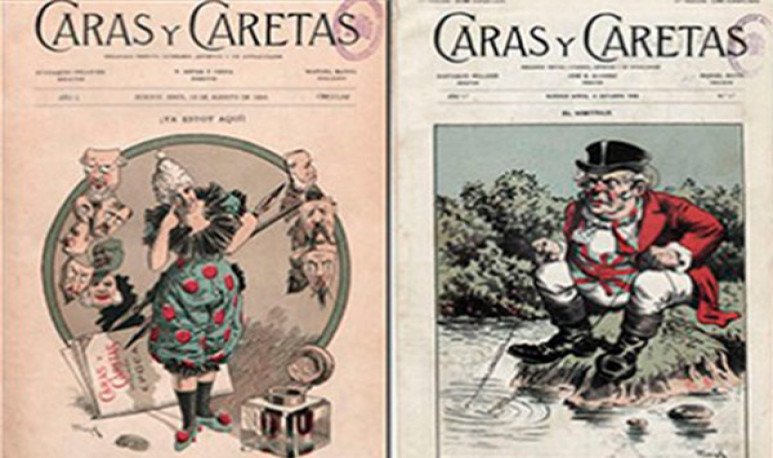 When the Spaniards  Eustaquio Pellicer and Manuel Mayol , in the company of  Fray Mocho , decided to refloat  Caras y Caretas on this side of the Rio de la Plata, since he had a major Montevideo premium, Argentine journalism was one of the main ones in the region. The rate of new publications is around seventy per year, and the editorial works spread in all the neighborhoods exceed 1,500. The rapid economic, social and demographic changes in Buenos Aires produced a complex readership, a mixture of Creoles and immigrants, with different occupations and knowledge. But eager for cultural consumption that would soon integrate them into a country under construction.  And Caras y Caretas  will be for costs, one-tenth of the price of illustrated and photographic magazines of the type “The South American Illustration” (1892-1905), and, especially, for journalistic and advertising quality,  a manual by the Argentinean -porteño-  Customs to learn and names to memorize, circumstances to live and urban languages, all this will be recorded in this “festive, literary, artistic and current weekly” until the  newspaper Crítica (1913-1962)  is the one who prints a sentimental education of the people.

“Festive”, it can be with malicious cartoons of  Cao and Mayol  from the cover, “literary and artistic”, little, but of “actualities”, a lot. And more than because of the chronicles of a  Juan José de Soiza Reilly , today sprouted in the costumbrism of the etchings and reviews of  Fray Mocho, Nemesio Trejo -inventor of the yellow police chronicle- or  Felix Lima , the novel photoperiod coverings andIacute; sticas by  Salomón Vargas Machuca,  the first cartoons of graphic humour, and the semblances with lyrical pretensions, where  Leopoldo Lugones or Rubén Darío could sign.

The hundred thousand weekly copies squeezed the porteña agenda to the tune of the  “caricaretas” , such were known to their journalists, even opened unexplored fronts, “The topic is topical. Many comments have been woven around the fact. In truth, she deserves it... This is a smart girl - Miss  Maria Angelica Barreda - the first woman in the Argentine Republic to have obtained the title of lawyer ... Attorney General Dr. Manuel Escobar has not allowed Miss Barreda, despite being born in La Plata, take an oath to practice his profession in the province of Buenos Aires,” emphatically starts the unknown and complete chronicler, “Dr. Escobar - distinguished jurist, whose erudition agrees  with the old idea of male justice - rejected the request of the first Argentine doctor,  advising the Supreme Court not to grant a woman the right to freely exercise the profession of lawyer. The procurator is based on the fact that there is no law that provides for the benefit of the female sex. To make this verdict much more picturesque, he adds that there is also no law prohibiting it... many lawyers have spoken out in favor of Miss Barreda, one of them “the supreme court will not be able to reject the request because it is neither patriotic nor humanitarian... it is not fair to want to apply a law to no one who does not exist,” said  Caras y Facetas  in 1910. Barreda, for his part, said that it had been complicated due to the “hostilities of colleagues and teachers”, and commented indignantly, “the most curious thing is that the civil appeal chamber of the city of Buenos Aires accepted my title reminding me of the right to advocate. Last May 19, I swore in at the Cabildo, in the same room where the Board of 1810 met, and before the same furniture that currently adorns it,” he concluded by proudly exhibiting the  diploma signed by the rector of La Plata, the huge educator Joaquín V. Gonzalez .

Put on your mask and take care of the faces

“The mask that was a symbol/frank saturnal day, of cheerful farra/today we take everything to porfia/ of existence in the infernal barber/ And only crosses the world without a facet/ some crazy unhappy or some esthete”, the magazine in 1899 reveals that modern life in Buenos Aires, where the rich could cross with the poor on Avenida de Mayo, a very new dangerous touch emerged. The mask, then, metaphor for a society needing appearance to survive without conflict.  Caras y Caretas  was aware that under the Caretas  was boiling a society, prior to Yrigoyenism, and embarked on criticism of the Caras  in turn - moderate, of course, partly because many of these journalists alternated with public jobs for subsist - This is how it covers the first workers marches - and repressed - of May Day, or the strike of tailors and dressmakers, “that in the middle of the eve of the Centenary leaves half Buenos Aires unblown”, and that meet “in the Colonia Italiana society of Rodríguez Peña Street... speeches in several languages, predominantly Russian and Italian... next to a modestly dressed worker looks a colleague in a great hat, and elegant costume, united in the claim”, which includes, transcribed, in addition to the eight working hours, and recognition of trade union organizations, the closing of the workshops where they work on piecework, that is, the clandestine ones. Yeah, in 1909.

And when it did not carry the journalistic inks, the social reality filtered into the customs cartoons, and which also presented the faces of the new characters of the city, could be the Italian fish salesman or the Spanish storekeeper, or the fearsome for the Buenos Aires, proletarian society. striker/anarchist/seditious. These masks emerge in texts full of lunfardo and cocoliche, realistic pieces of the impact of  Mario Zavattaro - the first telluric artist of Espadrilles before Molina Campos -  and sensationalist photographs. In “La Huelga” in 1902, a story by  Carlos Correa Luna, drawings by Alonso , three carreros, a creole, a Spaniard and an Italian, talk, “I know you say that the property is a thing e robo... heh, let you amure the car a story and let's see if it doesn't give part to the  chaferola  -police- like any walker, says the creole - to increase us by the fortnight... we're in the right place... but that about how the one-eyed and those who live by the peak is screaming, there is the sea of difference... And what after all... to make the same friars, with different saddlebags”, recovers the fragment Eduardo Romano. A week later, a strike was reported in which 150 people were arrested and 79 were expelled from the country, according to the  Residence Law  or the Cané Law. Accompanied by abundant photographic material in the same port, it is highlighted that among the expelled were Argentines, the labor leader Luis Saporito among them, and that the subsequent State of Siege was “supported by the impartial opinion of the country (sic)”

In  Caras y Caretas  a horizon to work, cosmopolitan without concealing the differences or contradictions, between creoles and gringos, the malevo Pascual and the tano Juan, “great homeland, che, we will do us and the gringos working, giving the heel and the musculature and thought... Look at Basguaele, he fixed the difference with this cuez, and tell him that they scratch their heads, uh... Endonce, live the libertá”, reads in  Correa Luna 's “The question of creollism”. On the other hand, the Creolism that encouraged  Evaristo Carriego and Ricardo Rojas from those same pages.

Although he did not exercise the direction, the editorial line of  José S. Álvarez (1858-1903),  or the best known  Friar Mocho  , guided the magazine at least in its first glorious decade. This Entrerriano, who had already directed two newspapers at the Colegio de Concepción del Uruguay, soon stood out in his province, especially when he led a student strike in Paraná. Arrived in Buenos Aires, he collaborates in countless newspapers linked to   Sarmiento  and the Gutiérrez brothers , in the police and social sections, and increases his appreciation of the immigration culture without renegating its initial nativism.  Friar Mocho   becomes the voice of those who have no voice  .And few Argentine writers will have the lively dialogues, pieces of life, of  Fray Mocho .Police officer, desist from the salons and prefers to talk with the catfish - as the poor were told - From a reformist tradition, the author of “Un viaje al país de los matreros” (1897), that book of memoirs of the rebels gauchos of their coastal blades, ño Ciriaco, Yacaré and Chimango,  Fray Mocho  anticipates etchings with social criticism, master of the local artists  Lima, Correa Luna and Santiago Dallegri  , and  source of the genre chico criollo theatrical  and sainete. And beyond with a cross to the jaw, or more here with humor,   Roberto Arlt  and Guillermo Divito.

“One night, months later, we would find the Opera with a companion of routes,” he wrote in the “Son of Doñ' Amalia” in  Caras y Caretas  (1901) about a warlord of provinces, “-and the companion said- “But aura miraba'l “Bunnywho is the new deputy of our province and who is there in the box with several friends... is son Doñ' Amalia, remember?...that chinese from the bath that took us when we got lost...” —and I looked into the box and saw, lustrous  and rubbish, a middle-aged tape  - as people were told - that looked as distracted at the glowing room, and remembered the modest fire.on whose shore, a poor old Chinese sang the meat of a lizard that would season, in the absence of salt, with goodwill and with the affection of a mother.” And finally, a warning to anyone who wants to hear, in another misnamed tale, rather the etching “Patriotism... and fat broth”, “look brother... I know what I'm telling you... if history and patriotism, handled with some malice, can't open a court for you, it's because you're destined to live from your work... it's good that you try... History... if you learn to manage the lives of our warriors... there's no more substantial broth than; the one taken by the patriots... - they speak of Taquito, a fellow of Faculty - when he made the discovery that that natural daughter of the trunk -patron - of  San Martín , was just studying, and yet he connected with -  Vicente Fidel- Lopez and Don Bartolo - Mitre- , ending in a controversy between Paul- Groussac and  Stanislaus S. - Zeballo ... You see, how could you not do it?... -and before “I don't get the leather” of the friend, he says -” you're so romantic, something that Taquito didn't have... you have to go to Congress and he's a leader... and if you rush me a lot, you get to the president of the republic. With history and patriotism, he reached everything in this land”, he said in  Caras y Caetas  in 1902.

To the drums: from candombe to la murga