Eva Duarte in the early forties seemed at last to touch the sky. There he was when Colonel Perón would change his life. And that of all Argentines. 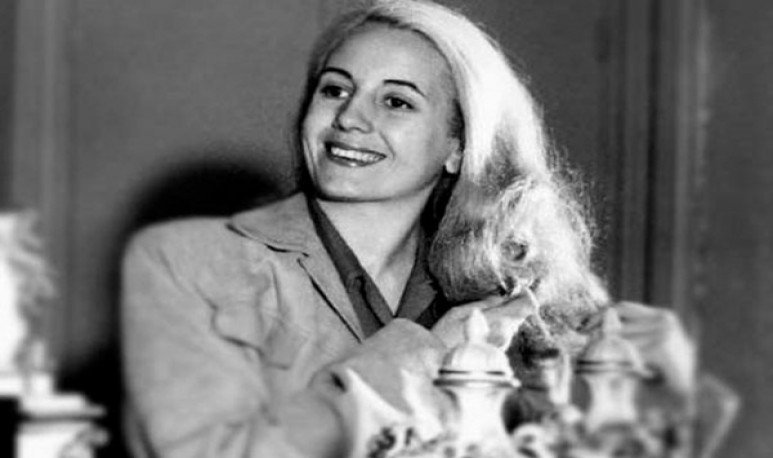 Eva Perón  is usually sized and valued, for better or worse, from 1946 onwards. It is when it plays a central role in the consolidation of Peronism, not only in the well-known diplomatic action abroad, or the implementation of  President Perón's social arm,  but in popular memory.  Evita  was, also for better or worse, the realization of the Peronist doctrine that survives among Argentines. Rivers of ink behind the  Evita  from 1946 to 1952, on the other hand, few go back to the previous years. While there are pioneering works such as Juan José Sebreli's, in the eyes of many “that woman” appeared out of nowhere, with a halo of the color you look at. This has little to do with an  Eva Duarte  who had fifty radio theaters, being the figure of  Jaime Yankevich  , touring Argentina and Uruguay with major companies, more appearances in Argentine cinema. Whoever met  Perón  at a charity event for the victims of San Juan, after the earthquake, was not an unknown one of the covers of magazines. Of course, the artistic career would be buried with the earthquake that would shake the national soil since  October 17, 1945 .

Maria Eva Duarte  was born in Los Toldos on May 7, 1919, a date that was forged after a false 1922, surely in order to avoid the misery of the “natural son” She was the daughter of a tenant of Chivilcoy,  Juan Duarte, and in childbirth during the stay” The Union” was attended by an indigenous midwife, Juana Rawson of Guaiquil. The fields uprooted from the tribe of Colicheo shelved the birth of the “bearer of the humble”  Maria Eve  was also the fifth daughter of  Juana Ibarguren,  fifth sapling also with Duarte; a man who lived the not-so-strange double life of the Buenos Aires estanciers of the nineteen hundred. They lived in a house on the street Francia 1021 —which is still preserved, today Eva Perón 1026 — and led a humble life although with prospects of ascent, a brother of the Basque Ibarguren came to head of the local railway.

And there was a fact in 1926 that would trigger the sudden change of family course and, later, move to Junín. Juan Duarte died in a car accident. One story tells that the girl Eva cannot fire her father, since the legal wife of the estanciero, prevents entry to the wake until the deceased's brother intercedes for “these unhappy who want to see him for the last time” On the other hand, Sister Erminda tells a completely different story, with a father veiled “silently” by Doña Juana and her sons, who kissed them “with a religious tone, with the sad gaze of the daughters of father's first marriage”, while the mother transfigured the pain in the need to “strengthen” whatever the truth, it does not matter, in the gaze of Sebreli, “the morality of the legal family is finally the morality of the owner and being bastard — or natural son — meant nothing but to be dispossessed... not only bastards, those who a combination of uncontrollable circumstances did different from others, are exiled from the society; there are also the proletarians, the colonized, all the oppressed of the earth” “My work is not philanthropy” — it appears in “ The reason for my life” (1952)  by Eva Perón  - “it is not charity, nor is it alms, nor is it social solidarity, nor is it charity... is strictly justice... alms and charity are for me an ostentation of wealth and power to humiliate the poor,” he closed in what seems a claim that comes from there far and long ago, from the dusty roads of Buenos Aires prior to the democracy of masses.

Road to your destination

In Junín there is a single mother with five mouths, one of the sisters, Blanca, starts to work as a teacher, another, Elisa, in the mail, and the male, Juan, in a pharmacy. Dona Juana sew that she sew you in an old machine with severe pains from an uncontrolled ulcer.  Eva  dreams of being an actress and participates in every act and school representation, “when I speak to the men and women of my village, I feel like I am expressing what I was trying to say when I was saying at my school parties,” I would say in 1949. And he also knows some Yrigoyenist warlords like  Moses Lebensohn.

In 1934 he did the impossible for his mother to convince the popular singer  Agustín Magaldi  about a possible sponsorship in Buenos Aires. And on that tour in Junín, Eva's passion twists fate, and they take train tickets for four, Juana, Eva, Magaldi and his wife. The truth is that within a few days of living with the Magaldi family,  Eva Duarte  decides to fulfill her dream alone. Many deprivations and sacrifices in a 16-year-old village teenager, useless hours at the gates of powerful broadcasting, some dramatic months of study at the Council of Women, and finally gets in 1935 a small role in the company of  Eva Franco . The following year he made a national tour with Pepita Muñoz and Eloy Álvarez and his future looks bright. One of the companions is admitted, and the cast is prohibited from visiting, for fear of contagion.  Eva  is sorry and brings her food, accompanying him for a few hours. And she's getting lost her job, “They say I'm a social resentment. And my super critics are right. I am a social resentment - I would already say  Eva Perón , who with her triumph represented the triumph of all the black heads, provincians like her, and who changed the porteña physiognomy since the thirties - but my resentment is not what they think -the oligarchy - My social resentment It doesn't come from any hatred. But love: love for my people whose pain has forever opened the doors of my heart” Fourteen years after that incident on the Argentine routes, and during her mythical work at the  Eva Perón Foundation , she will kiss a woman with ulcerated lips.

1937 seems to end the sufferings with his first film roles with  Pedro Quartucci . Looks like he must cover a scam from his brother Juan, oh, Juancito! , to the National Postal Savings Fund. He lives in a poor tenant in Riobamba, between Lavalle and Corrientes Avenue, who does not match his star in motion. At the end of that year he obtained small participations on Radio Belgrano and is directed by Armando Discépolo. Radio Mitre and Radio Prieto start placing it in front of the cast and is encouraged to try success again in theatre, in the companies of Camila Quiroga and Tomás and Leopoldo Simari, and in cinema, in “El unhappy del pueblo” (1941) starring  Luis Sandrini.   However, radio would be the definitive springboard for  Eva Duarte  with the cycles on Radio El Mundo and Radio Argentina, and especially one that starts in 1943 on Radio Belgrano, and attracts a large audience throughout the country. to some of his speeches, and novel great women of history such as  Isidora Duncan, Rosario Pérez Zelada,  hero of the fight against yellow fever in 1871, or  Catherine the Great, empress of Russia.   It was a success from the first where he played  Madame Lynch,  wife of the president of the Republic of Paraguay, Francisco Solano López, deposed by the fratricidal War against Paraguay (1865-1870) Towards the end of the year he directed on the same radio “Towards a better future”, a an “Argentinist exaltation” program, which praises the June coup military, who were steadily controlling the media. You know her as  Evita Duarte . The night of January 22, 1944 is approaching at Luna Park to be eternally associated with another surname.

The controversy will ravage with the mere mention of  Eva Perón.   Beloved or hated, object of consumption of global culture, no one leaves indifferent because she was a different woman, who could beat the most powerful character of the time,  Colonel Perón himself,  “I looked at her and felt that her words conquered me, I was almost subjugated for the value of his voice and his gaze,” recalled the  three times president of the Argentines  in “From power to exile”

Two opposite looks to understand how Argentines see  Evita . Sebreli in 1956 said in Contorno magazine, “  Eva Perón  may do what she had never been before — social reformer, popular tribune, speaker, union leader, traveler, writer, polemist — to take revenge on all the humiliations and offenses suffered in her dark life as a failed actress, as the anti-peronist psychologists explain to us. It is possible that she chose to cross the Avellaneda Bridge — N. de R. on October 17, 1945, Eva Perón  stayed in the apartment of Posadas Street — because the doors of Barrio Norte were closed. His miserable childhood, natural daughter, younger sister, provincial, and ultimately a woman is likely to flow”

Writer Julia Prilutzky Farny recalled another  Eve , “the work in the Undersecretary lasted hours and hours.  Eva  entered a double row of people, and had that innate feature of the politician: to recognize each one by name. And so, when he arrived at his office, he had already dealt with fifty matters along the way... then, people who were coming. He waits — sometimes, hours — but that he was getting out of there with his problem totally solved. No loose ends. And so for days. No schedules. Years later, already at the end of his active life, his life in the Undersecretary, at some point he rose sharply. Midnight. The work was still. He would stop suddenly, take care of someone, sit down again. One, both. I walked while writing down data. And a remarkable thing: I was doing memory cards... beginning to feel pains... walking was a way to disguise. But there was a time when tiredness was stronger. And then he knelt on a chair, arms on his back... the person I was attending was not talking anymore, and then,  Eva  smiled, “no, no, ma'am, please follow me explaining. Don't worry. I hear her”” The Thousand Faces of Eva, an extraordinary woman who entered at 20:25 on the night of July 26, 1952 “to immortality” of the past, present and future national.

To the drums: from candombe to la murga