Among the minds that influenced the 1980s generation, Echeverría's thought rises with its flags of democracy and national identity. 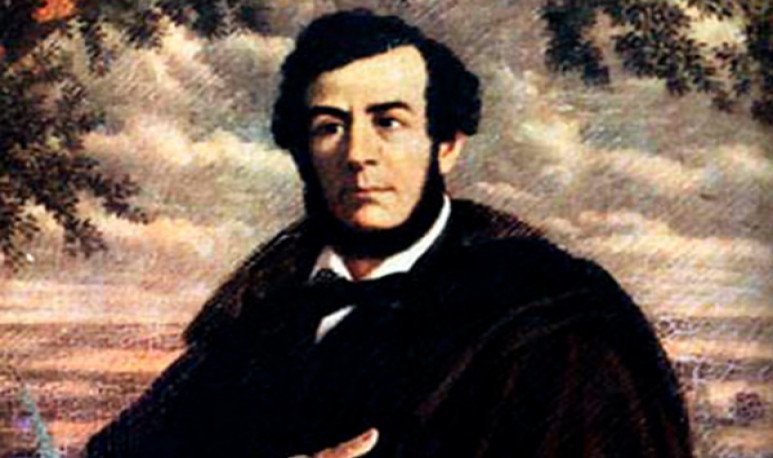 Buenos Aires  1837, year of red punched and the cob of the Restorer of the Law, Don Juan Manuel de Rosas  . A black city where candlelight lights are small lights of society. On the narrow sidewalk of Victoria 59 shopping street — today Hipólito Yrigoyen —, almost around the corner of the Cabildo Buenos Aires, you hear the passionate voice of a young man who is giving birth to  Argentine literature .  Esteban Echeverría  reads the first two songs of “La Cautiva”,  on June 26 and July 1 respectively, an epic poem that exalts the heroism of the campaign peoples, faced with malones, and that brings the absolute novelty of using the Rioplatense language in dialogue with universal inheritance. This kick-off in Marcos Sastre's  Argentina  bookshop, which in one more milestone of the national pericon had gathered among the contertulia notorious rosistas, such as the writer  Pedro de Angelis,  and furious anti-rosistas, such as  Juan Bautista Alberdi,  projected Echeverría as the intellectual and artistic master of the generation of 37.  The first one who thought of Argentinian .

That same night, Sastre offered him his famous Literary Hall and our first writer declined, as he preferred the level of discussion of ideas.The following year he would be the alma mater of  La Joven Generación Argentina,  along with “thirty-five young people,” including Juan María Gutiérrez, Vicente Fidel López and Alberdi, and challenges the dangerous Rosist police, who had previously banned those libertarian gatherings on Victoria Street. The road of forced exile will be the salvation for this Buenos Aires born on September 2, 1805, who had coded twenty years old with the main intellectuals of Romantic and Socialist Europe, and who had returned to the country in 1830 to participate in a bad intellectual climate barely lighting in the aristocratic literary salons of Mariquita Sánchez de Thompson.An atmosphere that quietly receives his first works, verses in newspapers and the poems of  “Elvira or la novia del Plata”,  and that does not perceive a fundamental novelty that came with Echeverría on the boat: the Argentine writer and his audience.

Echeverría, the first Argentine writer in search of a national audience

“In order that poetry may worthily fill its prophetic mission, so that it may act upon the masses and be a social element, and not as until now a futile pastime, and, the more pleasant, it is necessary that poetry be beautiful, great, sublime, and manifest itself in colossal forms”, writes on the eve of the publication of  “Consuelos”  (1834), which together the  “Rhymes”  and  “La Captiva”  , complete the only books Echeverría will publish among us.Let us note that the latest works were written in Las Talas, a place near  Luján  where  Echeverría  had been held for his recurrent lung problems, and that surely influenced his vision of a  pampa  full of mysteries and s...iacute; mbolos, as present in later authors as  Borges  or  Ezequiel Martínez Estrada. In these words there is an unknown modernity in the  Rio de la Plata ,  Echeverría is the first writer who seeks to build an audience, an opinion that exceeds educated and sensitive women who “looked at the precious volume in search of the p...aacute; ginas that speak of love and where the passion between him and her dialogue, leaving blank their own names”, nor the devotion of mature men who discovered between lines “the fiery rays that flare the compositions consecrated to homeland memories”.

Echeverría  longed for his verses, as Adolfo Prieto  analyzes it well, to get out of the sympathies of the Ladybugs, enlightened but unpopular, and go in search of the Creole readers, of the Argentine people  . Not for nothing in his  “Republican Teaching Manual” , one of the first mature political manifestations of these ideas among us, places  public education  before nothing in the task of elaborating “a national culture that is truly great, fruitful, original, worthy of the  Argentine people ”. Along with his  “Socialist Dogma. Code or Declaration of the Principles that Sustain the Social Belief of the Argentine Republic” , written for the “emancipation of the American spirit”, are the baseline stones of the democratic sign that  Alberdi will breathe into the  Argentine Constitution . And, moreover, his inexorable  American destiny.

Echeverría, ideologue of democracy and education in the Rio de la Plata

For those years he was already resisting in Montevideo between the guns of the Rosist forces and the misunderstanding of his contemporaries. “That protest that honors us,” the seminal narrative   El Matadero  , went unnoticed as did the political articles that deepened the principles of dogma democracy, those who do not speak of it as a mere form of government, but about the raison d'être of a free and fair society. Inaugurating an imaginary Mayo line, in the sense of a revolution with a democratic and progressive soul,  Echeverría  maintains: “Democracy demands action, innovation, constant exercise of all human faculties, because movement is the essence of life... the word Mayo must return to unity of principles; in Progreso, constructive development would be if the beginning of May were applied; and in Democracy, it was the form of government born in May, and the necessary instrument to organize the country's government. Unity, the indivisibility of the Revolutionoacute; n without the existence of federal and unitary; hence, the need to go back, make union and gather experiences”.

Already in his final years, without letting write literature, there the poems " El Ángel caído” and “ La Guitarra” , where he continues to deepen a possible Argentine writing, Echeverría dedicates his diminished strength to the instruction pu u ublica in  Uruguay.  Public official, he works   with the certainty that “the masses must be illustrated about their true rights and obligations, educate them in order to make them able to exercise citizenship and to infuse them the dignity of free men, protect them and encourage them to work and to be industrious, to provide them with the means of acquiring welfare and independence”. These words, written at the edge of 1840, constitute the immediate antecedents that will inspire  Sarmiento , and the entire generation of the 80s , when they set up forty years later.eacute; s compulsory and secular primary education associated with the idea of economic progress.

Forgotten by his contemporaries, he died in  Montevideo  in 1850. He did not see his democratic, popular and republican dreams embodied in  Paraná  in 1853. Nor did it have a burial according to his foundational contribution in literature and education, both for  Argentines and Uruguayans , and it is not known where his remains ended. A monument of Torcuato Tasso from 1905, erected in its centenary at the initiative of the students of the  Buenos Aires National School , where he was a student when it was called  Colegio de Ciencias Morales ,  Echeverría reminds us on the corner of Florida and Marcelo T. de Alvear in  Buenos Aires , “ you Argentines fight for democracy ”