On January 23 and 24, 1989, it marked the end of the Argentine guerrillas born in the 1960s. And it stained with blood in the final months of Alfonsín's government. 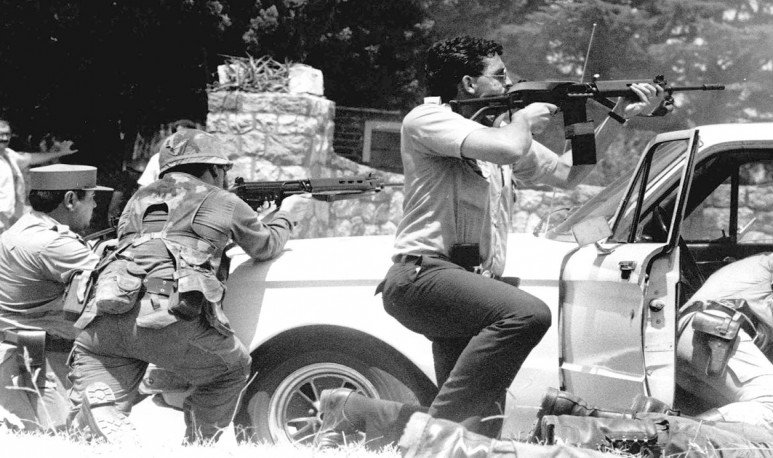 In the distance, it is difficult to explain the attempted copamiento de La Tablada Barracks, in La Matanza, an overwhelming early morning in the summer of 1989. In the abyss of the social outbreak of hyperinflation, social unrest was on the rise, a democratic government drifting emptying of power, but  nothing foreseen a military coup despite the two attempts of the previous year. One of the great achievements of radicalism in power was to consolidate  democracy  as an essential value of society.   For years, military intelligence leaks will be speculated to stop discontent over the laws of Endpoint and Due Obedience, and prove their worth, there is even the version of an internal within the same radicalism and the ubiquitous National Coordinating Board. In any case, the evaluation of the senior cadres of the  Movimiento Todos Por la Patria (MTP), several of them highly qualified in urban guerrillas and political analysis such as Enrique Gorriarán Merlo, was of an “imminent coup” and “taking up arms to mark the path of the insurrection” and “taking up arms to mark the path of the insurrection.   “ 29 guerrillas killed - several with little military instruction - 4 disappeared in full democracy, and 11 casualties of security and military forces - a couple killed by friendly fire of the security forces... Commissioner Pirker said more words, words less, “with a couple of tear gas, and not with 3,000 soldiers, it ended everything in half a day” - turned  January 23 and 24, 1989 into the last battle of the Argentine guerrillas. 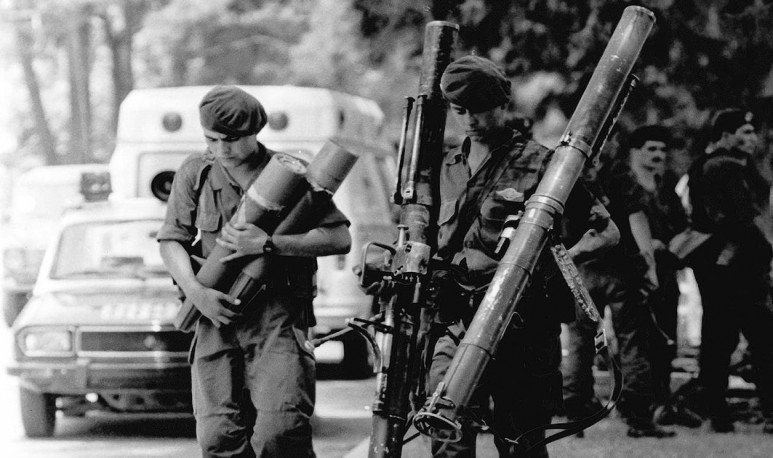 Sparriarán Merlo, El Pelado, wasn't any improvised . He had participated in the 1970s of the Revolutionary People's Army (ERP), along with Mario Roberto Santucho, and led with a lead hand in the Rawson prison escape, along with other ERP and Montoneros guerrilla leaders, and the bloody attack on the 10 Blue Regiment in Buenos Aires. With the 1976 military coup he managed to reach Nicaragua, where he became a leader of the Sandinista regime, and executed the assassination of Anastasio “Tachito” Somoza, a former Nicaguan dictator, in an ambush in Asunción del Paraguay, where he was refugee by dictator Stroessner.  In 1983 in Managua launched the magazine “Entre Todos”, directed by Carlos Alberto Burgos and his wife Martha Fernández, which began to bring together the militants of radicalism, the left, Peronism and the Intransigent Party with interests of defending and shoring up “the popular camp”  A few years then the intention would come to settle a movement in the country, Movimiento Todos Por la Patria, with electionary claims, with meager results, and headquarters in different parts of the country coordinated by lawyer Jorge Baños and Fra Antonio Puigjané, especially in Northwest Argentina revitalizing the area of influence of the ERP.  The organization was funded from Nicaragua, with a view to extending socialism in the region, and also included the plan on media support, such as the nascent newspaper Página/12.   In this newspaper, a key part of the journalistic renewal of the 1980s, between December and January Burgos y Baños denounced a Peronist-unionist-military pact, the future President Menem, the seditious military Seineldín and the guild Miguel, under the title “   The military are preparing to leave again.”  That was January 17, 1989. Five days later, a Coca Cola truck was rocking the main entrance of the Machined Infantry Regiment 3, at the crossroads of Crovara Avenue and Camino de Cintura, in La Matanza. 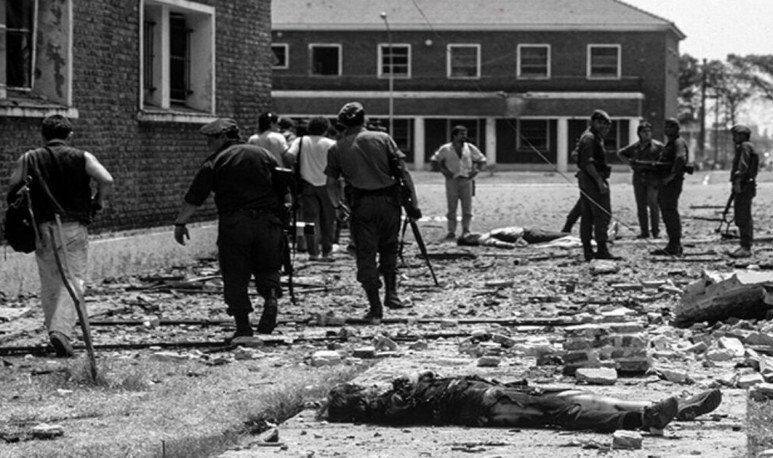 The last match of the argentinian guerrilla

Joaquín Ramos, one of the members of the MTP who entered the barracks of La Tablada, in the documentary Tablada, the end of the '70s confesses, “Seeing it now seems to me that we had a half-naive concept of revolution... We talked at the MTP that the tactic of popular and prolonged war that armed groups had, of making a guerrilla that is fighting for years, was like in Argentina he was not going anywhere. There was always more talk of an insurrectional revolution, more Iranian style. After studying, in prison you have a lot of time, you realize that insurrections don't do this: “We're going to make an insurrection” and people go out. An insurrection also needs work, an organization, a planning, a structure, which we did not have. But I didn't think all that, I didn't feel it. I was told that people were in a lot of anger with Alfonsín and with a lot of anger with the milics... and I thought it was with that. That's why I'm telling you that the idea is half naive. That if we generated the famous spark that burned down the prairie, if we generated a catalyst that could be the takeover of the barracks of La Tablada or the armed resistance in the event that the milicos came out, like we were going to unleash the force of the village that was as asleep, or crouched if I wanted to s, waiting as a sign — yes, it's half naif everything — as someone who would tell you where to get all that ring'  And if we consider reality, fatally naive. It was not very difficult to foresee for these experienced men surrounded by young idealists and provided with rusty guns buried since 1981 in Jujuy, without training, that the goal of coping all five units and getting aboard tanks, which only a couple knew how to handle, to Plaza de Mayo, was more than a chimera, a suicide.   For example, two whole squads of guerrillas were contained, and decimated, by two snipers. The main plane monitored from a service station, including Gorriarán Merlo, something that was immediately disabled by the electronic interference of a single military aircraft that followed  the orders of General Alfredo Arrillaga, then charged in c  rimens against humanity  in Mar del Plata.

According to the survivors 'statement to the Inter-American Commission on Human Rights (IACHR),  La Tablada's assailants reported their surrender raising white flags at 9 a.m. on January 23. No one saw them or nobody wanted to see them. Arillaga clarified that he did not have a megaphone to initiate peaceful surrender.  A meansave fire burned down the casinos where the guerrillas were parapetted with hostages, which of the 46 original members of the copamiento were reduced to 24 by noon, among the dead the leaders Burgos and Baños.  The next morning, with the imminent arrival of  President Alfonsín,  Arillaga gets a megaphone and the insurgents are handcuffed in the Indian line, 14 men and two women, and they line the officers casino. Francisco Provenzano, the “Pancho” eagerly sought by the military among those who surrendered, and Carlos Samojedny, an old ERP militant, remain detained today; as are Iván Ruiz and José Alejandro Díaz , who surrendered the previous day, and were recorded in the lens by photojournalist Eduardo Longoni. Prosecutor Nisman validated the versions of the military that the disappeared guerrillas had escaped abroad as Gorriarán Merlo. 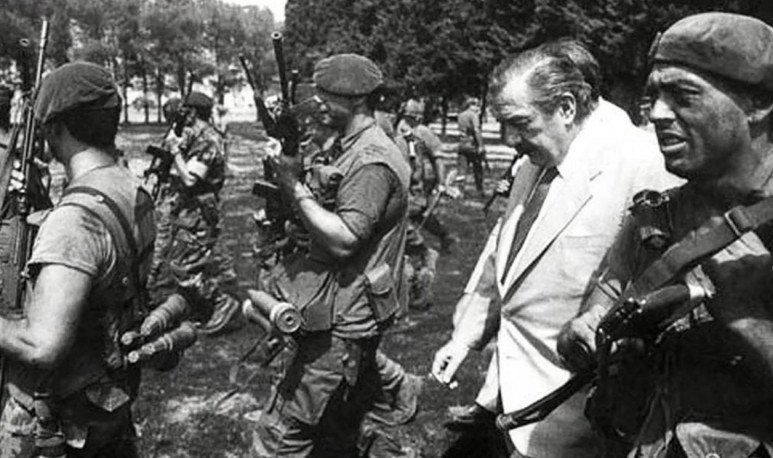 Crimes against humanity in Alfonsín's presidency

“— And the young people who participated in the action?
Perpetual. To all perpetual. The trial had nothing to do with the law. In the trial, those who entered with the Coca Cola truck are accused of crushing Private Tadia who was at the door. Private Tadia was not killed by the truck but a bullet that came from inside and above, which was thrown out by deputy chief Fernández Gutierrez battalion, who was of course inside. The bullet entered the boy at a 45-degree angle. This is proven, however, it continued to be said that he was killed by the truck. The trial was a shame, no one can doubt it. One of the colimbas states with total naivety that at this or that moment he went through the Military College to “review the libretto”. “How? What libretto? “says the judge, surely terrified and trying to get the boy to notice and look for a way out of the nonsense. But the boy insists, “Yes, yes, to go over what we had to say,” Pinky showed on television “The corpse of soldier Tadia crushed by the Coca Cola truck.” crushed by a tank! In this matter, an absolutely cheating trial was added to the complicity of the press.
— Captain Monteli says at the trial: “When this girl passed, I emptied the charger in her neck.”
— “I was unarmed,” she also says and then, “She crossed and didn't see me.” What was this but murder? The girl was from Quilmes and was invited by a boy friend of his, Ricardo Veiga, who was shot. He was one of the four who shot! “Puigjané reminded the great journalist María Esther Gilio in 2004, the friar who was sentenced to twenty years in prison for simply belonging to the MTP, because at that time he did not agree with Gorriarán Merlo's verticalist leadership.  The 13 survivors and seven subsequent detainees, who were nine with the arrests in Mexico of the guerrilla leader and Ana María Sívori in 1997, were subjected to a flawed process of nullity, without defense, which in the mid-1990s began to be harshly questioned by agencies international and human rights, a protest that was on the rise when soldiers and civilians were declared to have witnessed torture and shooting.  The presidencies of La Rúa and Duhalde commuted sentences and successively pardoning those involved in the face of flagrant violations of constitutional rights, and the fair legal process, while the two thousand began cases against the military, judges and prosecutors involved.

“Sparriararán has, essentially, what I call the “official version” of the facts below; yet, the prolonged dialogue allowed that in the folds of that official version a certainty was ratified, which I was strongly disturbing about that version. official: the attacking forces had sought to conceal their character as “civilians”, throwing flyers from a fictitious group called the New Argentine Army (in various media the news was spread that it was a military uprising, carapintada; something that even lasted a couple of days) And it had been, in the words of Gorriarán Merlo, “at the time when it began to say that the attacking group was not a carapinted group but a group of civilians” that the operation was definitely shipwrecked”, began Claudia Hilb his sharp analysis of the bloody and inexplicable coping except for messianic and totalitarian mentalities.  A violent fantasy without looking at a people who wanted to overcome the horrors of the past, live in democracy and peace, and that turned the page to Argentina in the seventies.

35 years after the return of democracy