Home Argentine History Cafes from Buenos Aires: aroma and essence of the porteño

October 26 celebrates the city's cafes, which were, are and will be a symbol of friendship, lights, loves and good neighborliness. 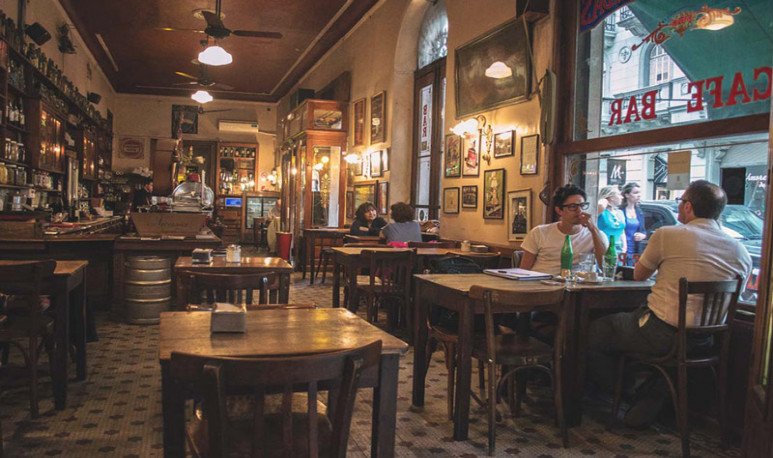 “I looked at you from outside/like those things that are never reached” starts the immortal tango “  Cafetín de Buenos Aires ” (1948) by Enrique Santos Discépolo and Mariano Mores.  And while classic Porteños cafes tend to disappear, the new franchise cafes continue to be unproposed by the old tradition of the shared table with the steaming Arab brew — or Ethiopian —, “coffee is a club without rules or discipline and perhaps without responsibility, other than the tangential and unexpected chronicle may hold him. Those who arrive there do not go for the purpose of drinking coffee. A metaphysical and dreamy tremor without relativism leads them to drink their cup of illusions and inspirations and to find something like a homeland of souls, without legal limitations or regulatory norms,” said Vicente Martínez Cuitiño, an accurate anthropological definition in 1949. Who has not lost the dimensions of space and time in front of a well? And how many stories were disbanded and woven into a round table with thonet chairs? That beats in the DNA of Buenos Aires.

“In the years of the Viceroyalty appeared the first cafes in Buenos Aires,” writes Ricardo de la Fuente Machain, “who, following a deep-rooted Spanish custom, played as lying, where any version is propagated, however crazy it is in favor of the one that is said or seems to be protectors of anonymity. They implied a higher degree than the classic village gatherings of pharmacies... also to the grocery stores where the campaign people and the sealers met... Cafés came to fill the need felt by the higher classes of society, and especially youth, to communicate with news, and participate from afar in public life with their critics.” In La Recova Vieja appeared the “Almacén del Rey” in 1769 and ten years later, the café “De los Tricks” in one of the corners of the current Plaza de Mayo, not because of the card game creole, but by a kind of billiards very similar to the contemporary pool. There and in “Los Catalanes”, of today's San Martín and Perón, the revolutionary fuse of the patriots of May would be lit

They continue to be a focus of civil debate and resistance during the Rosism and the times of the separatist Buenos Aires, the Café del Plata was highlighted, where you could taste the first ice cream of the Rio de la Plata (1856), although it did not beat the “coffee and milk”, not latte, and where the unrefined sugar came in the dish covered with a large cup. Then the parishioner had to pour it over the cup and pour the coffee, and milk, until it overflows to the plate. The accompaniment was giant toast with butter, and sugar on top.

The century progresses and cafes are confused with backgrounds and academies, the cradles of tango, “the academy was simply a cafe where women were served and music was played, usually in organillo; there they drank accompanied by these stimulating sweets and danced between cup and cup, with the same waitress. Creole institution in its origin and Italianized later” anoticized Juan Carlos Giusti, and places them mostly on Corrientes Street and nearby.  Francisco Canaro (1888-1964 ) recounted that “Suárez y Necochea was the central focus of La Boca's main entertainment venues. The house we worked in was called “Royal” coffee... it was served by waitresses dressed in black... it was taken Turkish coffee (a coffee that left thick erase at the bottom of the well)” and mentions that it competed with “La Popular”, the “Bar de la Negra Carolina”, an American black woman who received  American writer Jack London , and  the Marconi café in Olavarría in 600, cradle of socialism and the left.

In the ten, the great confectioneries like “Del Águila”, “El Molino” and “Paris” shine along with the cafes that impose the classic pair of wooden tables and round chairs in a checkerboard space. Writers begin to take their tables as second home and fictional space, in a custom traced in the  Manuel Gálvez of The Metaphysical Evil (1916) , plotted in the café “La Brasileira”, until  Julio Cortázar in the first chapter  of Awards (1960)  that takes place in the “London” of avenue de Mayo —there is a figure of the writer currently in local, as well as another of the  tango poet Enrique Cadícamo  in “La Puerto Rico” in Alsina “Rubén street, it is silly to enter and fill with smoke and get dirty in this joint,” playwright García Velloso told the Nicaraguan poet  Rubén Darío , and answers it for posterity, “Come on, Enrique, let's enter that this is the  coffee of the immortals , and that is why we will be in our element,” baptizing him when it was a hundred meters from today's Corrientes Avenue site. They were still exclusive to the men, the women would enter through a side door, if any, and go straight to the reserve. It was only in the sixties that women would be the engines of the resurgence of cafes such as “La Paz”, today unrecognizable on Corrientes Avenue, the “Politeama”, in Paraná Street, or the “Bar o Bar”, moved into Tres Sargentos Street. They were also the flame in the “Florida Garden”, a typical 1940s café, perhaps the time of glory of the traditional Buenos Aires café, and they breathe freedom and art in the Loca del Di Tella Manzana. 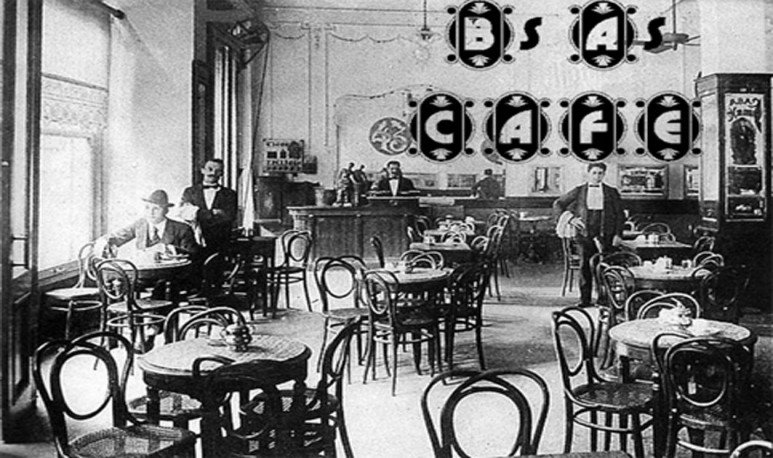 Notable coffees, in your miraculous blend of wise and suicidal

From “9 de Julio” in Mataderos to “Miramar” in San Cristóbal, through “Rivera Indarte” in Flores or “El Progreso” in Barracas, there are more than forty cafes recognized as Notable by the city government. That soul of authentic portality, and that connects us with our traditions, can still be found in two examples chosen by popular taste and urban legend.The  “ Gran Café Tortoni” ,  inaugurated in 1858 by the Frenchman Touan in Esmeralda and Rivadavia, arrived on May Avenue  on October 26, 1893 — date of the “Coffee Day” since 2000 -, masterpiece by Alexander Christophersen (1866-1946). In those days he invited distinctive, in addition to an exquisite black coffee, to savor meringed milk, milk ice cream, whipped egg whites and cinnamon or the exquisite chocolate with churros. During the celebrations of the May Revolution in 1910 it received the title of “Best Coffee in Buenos Aires” A few years later it was home to the famous  Peña de Tortoni (1926-1943) by Quinquela Martín and Alfonsina Storni,  among several great Argentine artists, and which included with an exceptional  Steiway piano, where Arturo Rubinstein played or Carlos Gardel sang , and which with its auction helped finance the monument to Storni in Mar del Plata, work by another rock maker, sculptor Luis Perlotti. Another singular rock that worked there is the creolist  “Camoati”  by Ricardo Lavalle and Alejandro Uussi “Despite the rain I went out for coffee. I am seat/under the tense and soaked awning of this old Tortoni known”, are the verses of Baldomero Fernández Moreno.

Another verse, now by  Homero Manzi , “San Juan y Boedo antiquo y todo el cielo/ Pompeii y beyond la inundación” in the imperishable tango  “Sur” (1948) co-written with Aníbal Troilo. Homer was the poet of another notable café, disappeared in 1958, the “Café Benigno” in La Rioja Street, in Parque Patricios. Manzi, the greatest poet of the moon and the arabalero mystery. But they say that on one of the tables in San Juan and Boedo, when it was called “Café Canadian”, before “Nippón” —which still returns to the present carved in one of the exterior glasses-, before “Del Aeroplano”,  Manzi imagined in 1947 the poetry of “Sur”, a tango that defines Buenos Aires.  In the sixties he changed to “Café Esquina Homero Manzi”, this raft that rescued shipwrecks all the time with a hot espresso, open 365 days a year. Ten years later, writer  Isidoro Blastein (1933-2004) , owner of a nearby bookstore, transforms it into a new point of intellectuality in the wake of the populist Boedo Group of Twenty. He barely survived in the nineties of a definitive closure, declared a National Historical Site, and today you can still see the heirs of the Barletta, Filiberto, Hebequer or Arlt reading a thousand hours, or scribbling as many, at a table with the same cut boy.

Analysts at the table and in the tin,   you gave me in gold a handful of friends

An Englishman commented in 1825 that Buenos Aires waiters are “extremely curious and ask indiscreet questions but in such a way that one cannot get angry. One of those gentlemen who engaged in conversation with me asked me several questions about England and the English, declaring that they were their favorite foreign customers... But, suddenly, he wondered why the English had such a ruddy face...”, closed from whom we   lend an ear without looking at whom, also they on the way of extinction, with their short celestial jackets and the faded repin on the sleeve. And sometimes they gave a little bit more, “the waiters of “The Immortals” weren't ordinary waiters. They wouldn't earn much on tips, but they lived in a climate of intelligence that made them understanding. They knew the men who really had something in their spirit and those who argued to entertain hunger. But everyone, in a trance of arriving from the street at lunchtime too early and with a toothpick between their teeth, was sure to be served with latte, big bread and lots of butter, which was worth a dinner. Debt of honor that complete savior, who was always paid with the first peso earned,” recalled  José Antonio Saldías.  A solidarity between parishioners and waiters, a small community with the aroma of coffee, which did not exclude the horns, “by the counter, looking at the short panorama... the skipper does it all: command the express machine, serve the orders, handle the box, wash the cups and mug, hold the chh.aacute; chara, sleeps standing, prepares raw and cheese specials and in the evenings, rolled up his pants, balds the floor... it can be Creole, Italian or Catalan, but it is usually Galician, of the lineage that, once claiming the vehement and vociferous protest of a gentleman who disbursed his he told him, sir, that the house does not attend to alcajueteries”, recalled José Barcia “Faith in my dreams/ And a hope of love” sounds in the background with the voice of Pole Goyeneche or Edmundo Rivero, thank you very much, my coffee shop in Buenos Aires.

Coda allegro, no requiem, of the café of Buenos Aires, heart of Buenos Aires that will surely survive any virus, any fashion: as the poet  Néstor Astur Fernández said,  “A thousand names of fantasy/ and exoticism, why?/If at the end, all coffee/will be the coffee on the corner”