In October 1888, the history of a Zoo that passed three centuries officially began. Walk of the families of Buenos Aires and tourists for generations, today converted into Ecoparque. 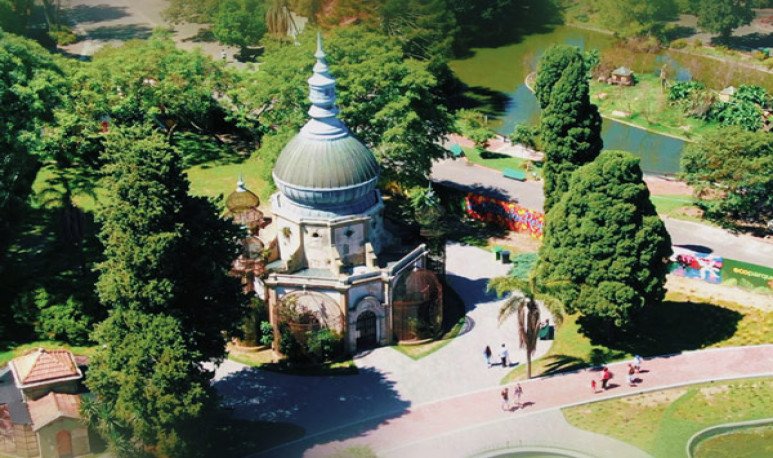 When he came to the presidency,  Sarmiento  promoted the Tres de Febrero Park  in the Palermitan lands that had belonged to Juan Manuel de Rosas,  and a June 24, 1874, despite opposition from Porteños deputies who considered the area “unviable”, sanctioned the creation of a current citizen lung, promoted the name in homage to the battle of Caseros (1852) by a former Rosista official,  Vicente López y Planes . Among the articles of the national law was “it will contain in addition to exotic plants and animals, ornamental or useful, specimens of our flora... the Argentine fauna will be equally represented in useful or peculiar species of the country, in addition to animals of other countries.“Opened the park on November 11, 1875, with a bustling attendance of 30,000 people,  Sarmiento  personally took care of gathering animals for the Zoological Section, one that was exactly opposite the current location, on the side of the current Libertador Avenue. Two lions, two tigers and some monkeys were the first attractions. And that they were a hundred meters from the Zoological-Botanical Garden, from the  residence of Roses  around 1840, and that included vernacular species such as yaguaretes, guanacos, ostriches, yacarés and some monkeys, dressed in “bells” as had been seen in  the first Argentine zoo of 1827  and which operated on current Cordoba and Paraná avenues. They say  Rosas  also had a meek tiger who would walk around the house and sometimes frighten the unsuspecting.

Until 1887 the zoological section grew slowly under the supervision of  Russian zoologist Carlos Berg. Carlos Pellegrini  was one of his main enthusiasts, “there will hardly be a more boring city than Buenos Aires” he repeated as he marveled at the Hamburg and Philadelphia Zoo, and in Europe he was looking for new species to enlarge the squalid endowment where foxes abound and rabbits, but there were no lions or elephants. All this was going to change with the designation in the direction of  Edward Holmberg,  on October 30, 1888, and a new scientific course, on a new plot of 18 hectares, exactly on the site that today stands the  Ecopark. 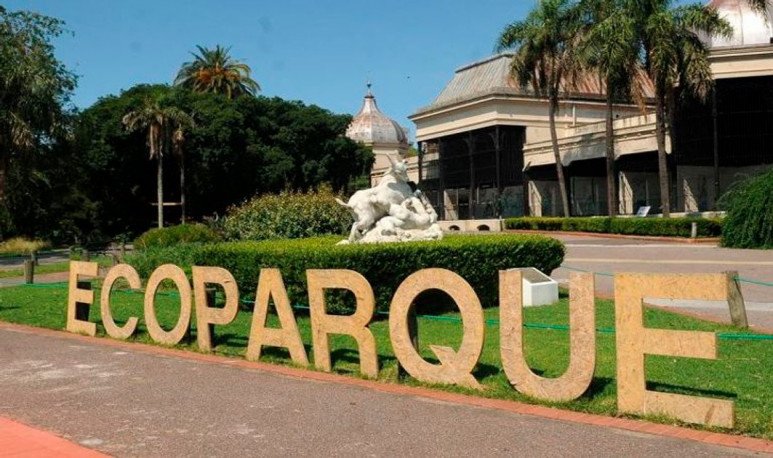 According to this outstanding naturalist, one of the pioneers in studies in Patagonia and an enormous educator in science, “one day  Dr. Eduardo Wilde -minister of  Juárez Celman , still park depended on the Nation - he told me, tell me something, you never ask for anything what do you want to be? And I said: I want to be director of the zoo. This thought was already much earlier in me, because I had plotted in Libertad Square, then deserted, a zoo for children. In that wasteland in Palermo the gardens were drawn, sections were erected, copies of the most diverse species were brought,”  Holmberg recalled,  who was also a pioneer writer of science fiction. Children were one of his central concerns, something that was already exemplified in his early days as a doctor when he treated a feverish child carried by a domestic worker, because the mother was in the theater, and  Dr. Holmberg  prescribed in a prescription book “Love &That love imprint of  Holmberg  linked the zoo to childhood forever.

“A zoo  is a scientific institution,” he wrote in the influential “Journal of the Zoological Garden”, which he himself edited, and which thickened a library “The fundamental character of its existence can pass unnoticed by its externalities... but the observer will always find, in the establishments of its kind, a vast field, rich in teaching cadres, where nature cannot be locked in the narrow artificial boundaries, and will not fail to speak to them with the eloquent voice of the facts. A zoo is not a luxury, it is not a vain and superfluous temptation. It is a friendly complement to national laws relating to public education,” said who is responsible for buildings with Moorish, Orientalist or Hindu aesthetics. He also commissioned the construction of the fence in 1895, which closed the perimeter with the arch of 1888, and sought to increase native species, including the Patagonian mara: he complained to end its management in 1903 that it had only one, more than a century later reigned in the paths of the zoo.

Onelli, the zoo for all

Of the 100,000 people who visited the zoo annually under  Holmberg management, Clement Onelli  (1904-1924) spent one and a half million, in a number that remained as an historical average until closing in 2016. This spectacular number is explained in the action of an active director who sought to increase the audience's influx with advertising strategies, such as the giraffe walk in hand from the port in 1912. The press called these public appearances “are things of Onelli” But in addition, this relevant zoologist and anthropologist who collaborated with Perito Moreno and was instrumental in avoiding the border conflict with Chile in 1897, worked intensively to give him the physiognomy that all we know about the zoo, taking care of the green space, “the child who continues to visit the zoo, can, when they grow up, tell his children: this tree that you see, so big, I have seen planting (1911)” He incorporated beautiful sculptures, fountains, and new houses of animals, this time with a taste classic italianizing. And he had time to open another zoo in Parque Patricios, short lived in the ten, a craft school with tissue exhibitions, background to popular art museums, and was one of the first to bet on the educational possibilities of radio and film. He also thought about family recreation and opened a branch of the “Confectería del Águila” (1905) -still standing, a jewel of Buenos Aires architecture and today a university space -, calesitas, games and the remembered little train -which still works in Parque Avellaneda. And, as if it were not enough, he chased a Nahuelito in Lake Epuyén de Chubut, a crazy plan that was clear, but that did not prevent the governorate from declaring interest to the animal in 1922. Another unfinished project was the Buenos Aires Aquarium, under the current Botanic, which the city finally never enjoyed.

In 1915, already recognized the zoo as a center for animal study and protection,  Onelli  was commissioned to survey the urban area. “In the City of Buenos Aires, more than 20 species of vertebrates of the three zoos can be found without major difficulties.and that at different times of day and night, in different seasons, in streets and public parks, in private quintas and vacant grounds, you can often find them alive and free... weasels are seen in Parque Chacabuco and Parque Avellaneda... hares are found on the vacant grounds of Liniers to Bajo Flores... cuises walking down Canning Street... flocks of feds on the Hippodrome... lizards in Las Heras and Pueyrredón”  Manuel Mujica Lainez  recalled his visits to the  Onelli's house, who was inside the same zoo, marveled at “that solid and blood gentleman, who spoke a mixture of Spanish and Italian, and told wonderful excursions... under a strange atmosphere populated by the colonial saints who live today a section of the room of the Luján Museum... I watched from milestone to milestone the wicked man while evening fell and the cries of neighboring animals intensified the illusion of the jungle. Perhaps, among them, he walked the shadow of the plesiosaur”, recreated the magic of a dream environment as  Horacio Quiroga  had done before in the “Tales of the Jungle”

The zoo, the heart of Palermo

After the transcendent management of  Adolfo Holmberg (1924-1944, 1955-1957),  biologist nephew grandson of the first director, who encouraged animals not to be in cages but separated by ditches from the audience, in addition  to founding the Cine-Theatre -today Teatro Sarmiento  -, and the Institute Municipal Biology, the zoo began a slow decline of almost half a century. Several were the projects in the sixties and seventies for a transfer to Villa Lugano, while the animal population was raging and carelessness was a constant of the efforts, and finally, in the nineties it was privatized and acquired a conservationist profile, according to the new animal protectionist thought, but without the splendor of its first days.eacute; cades.

In the end we leave some postcards of the  artist Alejandro Sirio  of 1948, perhaps the zenith of the Buenos Aires zoo, which gave identity to his neighborhood and which will continue to be a pride in the memory of the porteños, “the zoo has the advantage of having a clientele for each day of the week... Monday pensioners have their day off... the days of Mars soldiers and sailors arrive with a female couple... on Wednesdays grandmothers abound with their grandchildren... who insist on explaining to them that turtles don't wear a hat no matter how much Walt Disney wants... on Thursdays he rejoices with the white fluttering that normal students... on Venus day, and after doing the rabona to school or workshop, future vampires come to study larks and swans... Saturdays from the Rural Exhibition come with ponchos, panties, daggers and folk rags... Sundays is the dayto more diverse and varied clothing... pajama alternates with panties and dresses on velvets... day when English governesses speak in Creole, bears hear their visitors speak in Hungarian... and fat men will mock the similar hippo”