The so-called “dances of the maids” renewed the Buenos Aires music scene and imposed a new space in urban dance, the danceable, then the dancer. 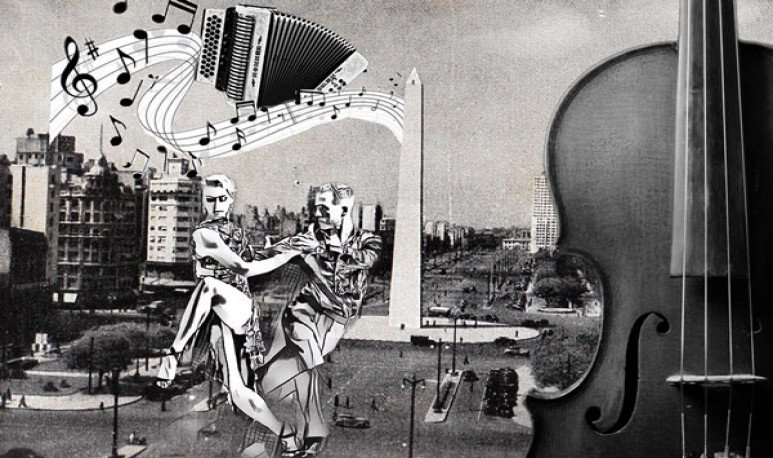 We usually paint in the 1940s as the monolithic reign of the  Typical Orchestras  of  D'Arienzo, Pugliese and  Troilo  . And dozens of dancers around doing firulets. Films like “Melodies Porteñas” (1937) to the most recent “Luna de Avellaneda” (2004) bring the echoes of tracks filled in squares and neighborhoods, those that coexist with the tango halls and cabarets of Corrientes Street. And while this social phenomenon is undeniable, also driven by the exclusive performances of tangueros live on the powerful radio stations El Mundo and Belgrano, it is an incomplete postcard of Buenos Aires's popular taste of the moment. For the scepter was disputed by bolero and folklore, who will finally be the victors in the fifties.

Both musical genres accompany the strong internal migration, which reached almost 40% of the population in the capital, and thickened one and a half million of the humble sectors in the conurban parties, with the majority of Correntinos, Entrerrians and Salteños. And its main consumers were women who came to work with “bed inside” from the badly called Interior, from the mid-thirties, and displaced the Galician maids immortalized simultaneously by  Niní Marshall . These young people fascinated by the councils and stars of women's magazines in “Para ti” or “El Hogar”, and faithful listeners of traditionalist cycles such as “Chispazos de Tradición”, passed the improvement during the Peronism that made several go from maids to workers qualified in factories. What they never abandoned in that long decade, which can be located from 1943 to 1955, was the taste for great dances. Palermo Palace, Parque Norte - formerly the Roman Park of Galleguitas and the first internal migrants of Las Heras Avenue -, the Monumental de Flores, Flor de Ceibo, Círculo Santiagueño, Kakuy and El Palacio de las Flores continued to the first, and almost clandestine, dancers of La Boca and Dock Sud organized by Correntinos and Paraguayans. There the girls, interverted with conscripts from distant villages of the deep country, could listen and dance without the rigid glances of the patrons of Barrio Norte, or of the military aristocrats of Palermo barracks, with the sentimentality of Mario Clavel, Pedro Vargas or Elvira Rios. They were pampered with the sensual cadence of the boleros “Kéme” or “Tropical Vereda”, among other radio hits and reproduced in dozens of mass publications.

But the culminating moment was the entrance of the  chamamé  and the provincial voice of  Antonio Tormo  , the denostate “  singer of our things”.  Attacked because the mendocino musician was a star as big as  Fanny Navarro or Mirtha Legrand,  with his own songs and sentimental versions of cats, chacareras, double steps, waltzes, zambas and cordobese jotas. Only the tanguero  Alberto Castillo  could make him a shadow in music, the Troilo or Pugliese went several bodies behind. A worker hero of the lapped interior,  Tormo  , constitutes the contracara of the heroines of the national golden cinema with white telephone, in a same argentinian currency.

Gorillas in the fog

In “The gates of heaven” of “Bestiario” (1951),     Julio Cortazar  describes the Palermo Palace on Calle Godoy Cruz, “a hell of Parque Japonés — N. de R. one of the favorite leisure centers of Buenos Aires until the sixties, in the current location of the Sheraton Hotel in Buenos Aires. Approximately 30 thousand people were attending this amusement park per week- , two with fifty the entrance, zero fifty for the ladies. Poorly insulated compartments, spaces of successive covered courtyards where in the first a Typical, in the second a Characteristic, in the Third a Norteña with singers and malbos. In an intermediate passage, (I Virgilio) we heard the three musics and watched the three circles dancing; then we chose the favorite one, or went dancing to dance, gin and gin, looking for coffee tables and women” concludes Sergio Pujol the excerpt, with the forceful reflection “a real excursion to the country of the maids”

“Now the Buenos Aires can no longer be layered on a coffee table because on the next table a group of black heads got noisily drunk. He can no longer stop to see people pass by in the corner of Corrientes and Esmeralda because they pushed him, nor walk because they blocked his passage, nor travel because everything was full and had to become ever smaller (sic)” judgment melancholy  Juan José Sebreli  in the splendor of dancers, the spearhead of the folkloric clubs of the sixties, which at that time of the Typicas, were still a limited demonstration of the nativist rebirth in small places such as “Mi Refugio”, “El Cardón” and “Mi Rancho”. There they played  La Tropilla de Huachi Pampa de Buenaventura Luna, the first group of Tormo, Martha de los Ríos, Los Chalchaleros, the Hermanos Ávalos and the huge Atahualpa Yupanqui , in the pioneering wake left in the twenties by  Andrés Chazarreta in the dissemination of Argentinian folklore. The children of these maids, workers and conscripts who paid their meager income these nativist locals will hold the  boom of the new songbook  twenty years later.

Between the orchestra that plays tangos and the northern ensemble, in the fragment of  Cortázar,  another called  Characteristic  appears. These groupings were the accumum of the rioplatense amalgam of races and cultures with a cheerful and carefree repertoire of tangos, rancheras, creollos waltzes, milongas camperas, polks, tarantelas and pasodobles.  Feliciano Brunelli , a pianist who worked with Troilo , turned to the accordion and conquered crowds with his Characteristic Orchestra . He continued on the route until the early seventies with the undeniable merit of achieving a musical and cultural synthesis between immigrant, migrant and Buenos Aires, between rural and urban.

What most bothered some Buenos Aires class of these 20 and 20, 20 for pizza and 20 for the disc of the rockola, inevitably folkloric, for sure  Tormo , was undoubtedly when this “zoo barrage” polluted leisure and its places, even spoiled European cuisine, &We will see you all eat ravioladas on Sundays at the spa gazebo, from which spa? What do I know, there is always a spa, a recreation on the riverside, with corrugated paper tablecloths stained with wine”, can be read in the best seller “The Bourgeois” (1964) by  Silvina Bullrich , and continues  Eduardo Mallea in “La Bahía del Silencio” (1940), “the supine manifestation of the corny, the transplant. And ordinarity as if it were things before any judgment, spare, and is contaminated” These taras and phobias of impurity focused on the crosses with “the black heads”, the object of preferred discrimination among  Argentines  “good” from the strong migració; n internal from 1935 onwards, it was rather a discourse that concealed a great hypocrisy from the Argentine middle and upper classes. A character from  Manuel Puig's “The Betrayal of Rita Hayworth” (1968),  “it is known that the last pieces in the romerías — N. de R. immigratory antecedent of the dancers - dance with the maids. The brides have already returned home and the students run back to the romerías to take the black to dance”

“Poor thing, that was terrible,” an old milonguero tells Pujol in the nineties, “sometimes if things went as we expected, we took them to the furnished, what today is called hotel or telo, because we had heavenly eyes, because they had become fond of us, because he talked to him; we go in another way, in the Buenos Aires way. All that dazzled them, deep down they were very naive girls... we were their folletín galans. We used to take advantage of them when we didn't even touch the girlfriends. I think about it today, and I think it's terrible. It is unforgivable,” the appointment closes, making clear the abuse but also the repressive sexual climate of the forties. Despite the sexist and classist context, young women from the provinces lived these loves at night also with some class and gender revanchism. They generated heats and fears among the Buenos Aires men, “the Santa Fe -Palermo Palace- was Celina”, at last repeats the narrator of  Cortázar  's story about an unattainable object of passion and love. An ephemeral moment of rebellion of poor women before a society that needed them, in the house or with their men, but segregated and stigmatized them as “mucamite” or “bold”

As can be seen from the article, the huge path of the great national dance is not without ideological and cultural, artistic and sexual barriers. Let's sing the classic “So you dance the chamamé”, shouting a sapukay and on espadrilles, twinned in the memory of the multitudinous Creole Patio of the Retiro area in the early forties, “they play a chamamé/ to dance zapateado/ And show the villagers — read porteñ os/how  to dance in the pay/ Take the dagger, country/ walk it on the court/ while the cordianas/ the musicians of the  bailanta ”, concludes the lyrics of “  Molina Campos del chamamé”, Mario Millán Medina.  Before the megadisk, there was the dancer. This combative spirit in front of the Buenos Aires, and proud of the provincial and its customs, will be softened until you reach the coastal “El rancho é la Cambicha” (1951), in the voice of  Antonio Tormo , and the whopping five million copies sold in a country of fifteen. “Tonight that there is dancing at rancho e' la Cambicha/Chamamé de sobrepaso tangueadito danceré/Milongueado chamamé oriental style/Trotting slowly as tangué dance” starts this  classic of the Argentinian classics  also written by Millán Medina. A letter that bridges between Buenos Aires and El País, tango and folklore. To the rhythm of this popular music should enter the tunnel of the Argentine past fear of social pollution, miscegenation, mantelito de papel stained with wine. Or, if it hasn't happened yet, that's the task.