Home Argentine History Blackie, the Lady of the Radio

Life and genius of the true precursor of women in Argentine media, the best interviewer and producer of radio and television of the last century. 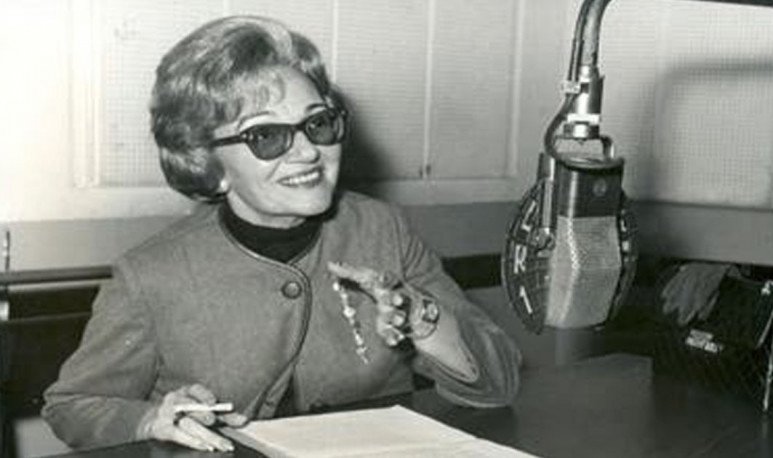 “I had the life I wanted and paid its price,” said  Paloma Efron, Blackie , to his first biographer, Ricardo Horvath. Together they worked on the fateful day of September 1977 on Radio Splendid where he started a new program, with more than forty years in the show,  Vamos, Animo,  inspired by one of his most popular hoses. A cycle that he had defended with capa y sword before the sinister dictatorship in power: “In my program everyone speaks,” he emphasized before a desk military. As he had also sheltered his spaces on state television and Continental Radio, the veteran   Dialogues con Blackie  . However, cardiac arrest, in a talent he never stopped creating, suffocated by a gloomy context, blinded an exceptional woman who once maliciously described as “a pair of smoked glasses, a double bass voice, with broadcasts most often crossed out by censorship, and proletarian pair of black espadrilles.”That didn't affect her, of course, because “every morning you had to make a radio program, prepare another article, calculate a budget. Total, we have to continue in the fight.”

Paloma was born  among the Jewish gauchos of Basavilbaso, Entre Rios,  in 1912. Daughter of  Jedidius Efron, the Jewish Sarmiento , a key teacher and school principal in the organization of Baron Hirsch, who saved thousands of lives in anti-Semitic tsarist Russia, and Sara Steinberg, owner of a great independence, humor and culture, unusual in a woman of the nineteen hundred.“Once,”  Blackie said, “my sister was testing in front of my old man and she started to laugh... when Dad looked at the door she found me totally naked with a year and a half... no one explained how I did to crack me to the school...”. “How is this young lady going down the street like that?“said the Tata, to which with all irony and respect my mother replied: “Because she is not a young lady, she is a young man.”Two references for Paloma's future: one, his overflowing yearning to know; another, a world of men that must be conquered with rebellion and intelligence.

Rebelde was when he decided to perform without parental authorization for a  federal soap  contest on Radio Stentor, where he played the jazzy classic  Stormy weather , that music and African-American culture was always in his heart. This success is  the audition  that the public christened  Blackie in 1934 and began to be the voice of the genre in  Buenos Aires , in theaters and on radio, where she works at Radio Municipal, Radio Belgrano and Radio El Mundo.He even sang at  Teatro Colón,  in the only carnival dance in history that our Colosseum organized. And he encandiled  Jaime Yankevich , the media tsar of the moment, who tried to convince her in vain to sing tangos. “I missed the best tango singer,” Don Jaime confessed later.

Fine stamp of the Argentine show

But the little Argentine Bold Jewish was not going to stay long. In 1937 he began a study journey through deep North America and stayed four years also performing on radios there, on a par with stars such as Ethel Waters and Louis Armstrong.On the return of that experience he met Carlos Olivari , journalist and writer, but above all a bohemian Buenos Aires, and he conquers him acting alongside Pepe Arias at Teatro Maipo. It was Olivari, and friendship with Sixto Pondal Ríos, both of them the best writers of comedy in Argentine cinema, who drive her to become an international show entrepreneur and, simultaneously, into a consummate chronicler, where fantasy and reality led the readers of  El Hogar to Hollywood and New York. All these tools were vital for Blackie  's almost forty to build the public figure, a myth too, that was going to dominate radio and television in the coming decades, both in the studio and behind consoles and cameras.

“I am not authoritarian, I have authority, which is very different. And my authority is due to the respect I provoke because I work more than anyone else, I am an organizer and no one can catch me in a waiver; I will never ask someone else what I have not tried to do. The first day I entered a television studio where I was supposed to direct forty men, there was a death silence. I immediately realized the situation and the first thing I did was let go of a swword referring to the heat it was and everyone loosened. There I discovered that my habit of being poorly spoken was a weapon I could use in everyday work with men, which placed me on an equal footing,”  Blackie  recalled of the year who was artistic director of  Canal 7  and worked in 1954 through a medium that served to spread the best of culture, without distinction of ideologies or races or classes, and with a professionalism that elevated the TV standard, something he repeated in his notable cycles of the sixties,  A woman today and  Date with the stars of Canal 9, where he practically invented television with panelists.

Simultaneously, he produced febrile on Radio Belgrano, Radio Splendid, Radio Continental and several stations in the interior of  Argentina.  And, as if that were not enough, she shone  with Dialogues with Blackie on Radio Belgrano  , being recognized by Carlos Ulanovsky and Hinde Pomeraniec as one of the best interviewers who have stood in front of a microphone. “The station was Belgrano, La Radio, and the program was   Dialogues con Blackie  , to not hesitate, the one with the highest audience... one Thursday Blackie entered the studio with all the bronca... and dry, without curtain, said: 'Good afternoon. These words are addressed to you, ma'am, who sent me an extensive letter, who did not deign to sign, where you criticize me the furcios... if I do them is because I have an hour and forty-five minutes of program... Or are you not doing furcios, ma'am? when you burn your husband's shirt with the iron... when you break a fried egg, is it a furcio or what, ma'am? You'd better worry about improving her spelling! More was missing!“, sparked into the air at the terrified gaze of his companions,” says his announcer, Alberto Thaler. A woman really empondered at the front of the microphone, who puts her finger on the sore half a century ago in the radial afternoons modorra.

The mother of another radio

For the seventies she was still the queen of the midday on Radio Belgrano and was acting as godmother for those who would renew the radio as Hugo Guerrero Marthineitz, with a way of interviewing that owed much to  Blackie 's deep listening. Until we arrived at the sad morning of 1977 he began to say goodbye working on his beloved radio: “The imagination of imagination,” he said. “Maternal, me?”,  Blackie asked, “And yes, the truth is that I have many adopted children in the absence of my own,” said who dreamed of a radio that grew everyone's soul, but especially geared towards women, who collided like today with glass ceilings and paper stairs.  Paloma Efron , with “love and respect”, spoke to them daily: “A woman must have the same attributes of man, she must be first of all intelligent, she must have ideas, be communicative. If she's pretty, better. Eye, I don't like those who use seduction to get something: seduction is a hard weapon.”  Argentine radio ,  although it is not remembered today as it should, has Blackie  the Lady in Espadrgatas,  one   that demolished prejudices and fought against discrimination before any.