Home Argentine History Battle of the Return of Obligado. Parts of the Silver War.

The foreign press played its role fueled by antirosistas in front of patriots like San Martín. 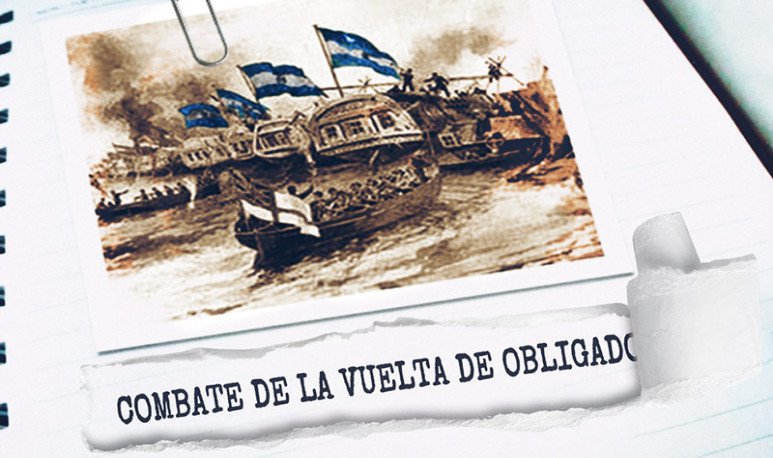 In the series of articles on  serargentino.com about the “Paraná Campaign”,  how should it be viewed in its entirety, the  Battle of the Return of Obligado  is a battle among others,  we count the essential support of Saint Martin . Although he again and again desisted from becoming an official representative of Juan Manuel de Rosas, his action in the press and European diplomacy cannot be ignored.  Inspired and proud of the Americanism of Rosas, one that the rhetoric of the governor of Buenos Aires blurred a swing drum, the Liberator does not doubt “what duty imposes... to provide services where you think fit... to repel the invader”   The largest Creole in the New World  was not wrong, as the  furibundos said anti-rosists in Montevideo and Paris,  and the peoples of the Middle East, Africa and even America, with Mexico, suffered in the flesh of colonialist aggression, exacerbated by militarist nationalism in the mid-nineteenth century. In one of the newspaper opposition to Rosas, this little sky, prototype of gauchesco, was published in Uruguay, celebrating the Anglo-French invasion of 1845, “go a rabid heaven/ something cute in certain cases/in which a winny man/to have fun to bulazos/ ay cielo, sky, and heavier this year for the blades/ at the coast of invasion/ we have to eat black pudding”  Such expressions deserved of Saint Martin contempt and anger, “such felony nor death can silence”

“The intervention of France and England in the affairs of the Rio de la Plata was carried out with enough energy... to prove that the fears of postponement that arose from the lack of clear and vigorous instructions and powers were completely unfounded...” appeared in the influential  The Times  on October 24, 1845, a month before the Battle of the Return of Obligado, “it should not be lost in view of the fact that the real objective of the intervention is to liberate the Eastern Band from the invading army - refers to the army of Oribe, ally of Rosas, a constitutional president who has been a constitution president who has been in the first place.iacute; has been deposed by Rivera with the help of the French, Argentineans and Brazilians - and to restore the proper independent government (sic)...  if there is war between England and the Argentine Republic probably caused not so much because we have taken sides for Montevideo, as by arbitrary acts inflicted by Rosas on British trade during the river war” he added that the violent interventions of the powers began in 1838 with the French blockade. However, and despite what level of British imports had fallen almost a million strong pesos due to the 900 days of the French blockade, British traders in Buenos Aires defended Rosas, a ruler who respected the monopoly of the English crown reaffirmed by executives homeland since 1810. In London, thousands of kilometers away, they vociferate, “for a long time there has been a group of English people determined to remain blind to the barbarities and insolence of the Rosas government” The almost 35 million kilos of fabrics, or more than a million in earthenwork, among thousands of merchants; as traded by the British during Rosism, guarisms of Woodbine Parish, chargé d'affaires of the crown, point out that they were not so blind, “there is no gaucho or lady who does not possess among clothes, and utensils, any product left our islands,” Parish reported to his superiors.

“Allied squads, as we have learned, have shot down the batteries located by Rosas at the entrance to the Rio, and the abundant fleet of merchant ships gathered in Martín García await immediate orders to head to their destinations,” the  Times  reported victorious a few days after the  Combat de la Vuelta de Obligado , and added  the real motive against national sovereignty, “the internal blockade of independent territories could not be allowed - to this is what the Argentine Republic calls - through the plugging of one of the great channels of communication the nature (sic) on the mere whim of Rosas...  this action is one of the most remarkable feats of maritime war that have taken place in many years if you take into account the magnitude of the enterprise, the relative strength of the parties, the strong positions carefully prepared by the government of Buenos Aires, and the small size of the ships that carried the British and French flag upstream” painted a fallacious picture because the battle was between modern navy vapors, and cannons of great fire power, in front of four improvised drums, with cannons of war of Independence, and without a professional army.

“For long years a desolate and bloodthirsty war had affected the State of the Rio de la Plata. Trade of all nations had been interrupted, and acts of barbarism unknown in the practice of civilized people have been committed. Together with the King of the French, I am taking steps to achieve the pacification of these states,” said Lord Aberdeen at the opening of the London Parliament. However, the picture was completely different in our Litoral and the strong resistance of the Argentine militias made the military and commercial mission of foreigners impossible. The combination of gauchos and Indian montoneras, with razed land strategies, left warships and merchants totally helpless, who often had to throw overboard the products they could only trade in Corrientes and Paraguay, both at war with Rosas - who did not recognize independence of Paraguay and the current transfers to Paraguayans from the Argentine territory.

“ The ferocity of the Rosas soldier has almost no parallels ,” wrote the correspondent of  The Times in Montevideo, ruled by Argentines and French, and resisting the siege of the federal army of Oribe and Urquiza in 1845, already unbearable the daily bombardment from the hill Maldonado, “Captain Reed, of His Majesty  Racer 's ship, told me that when it was anchored in front of Maldonado -Uruguay-, a man was beheaded by them for the simple accusation of having provided some fresh meat to the  Racer , that his cut head was kicked. sportively through the square by the soldiers, and that the officer who ordered the butcher's shop declared in son of mockery...” Roses' orders should be executed, and what if he told him that he had to cut his own mother's throat, he would not hesitate to do so”” textual published in London for the horror of the European readership, which began to question what they were doing in those wild pampas.  Rosas had signed on May 1, 1846 a decree establishing that all that collaborator of the invaders would be executed.

“ This is how Rosas volunteers fight”

Roses' intelligent strategy, the war of nerves and wear, began to bear fruit only in 1848 , when European powers were shaken by revolutionary movements, many of them looking with admiration at the Lord of the Pampas. In addition, the blockade had entered a tedious stage and smuggling was increasing between Buenos Aires and Montevideo, and ruined the interests of British and French traders.  A first attempt with the British representative Hood had failed because of Rosas's intransigence faced the interference of the powers in the Rio de la Plata affairs . From Britain they were very eager to end the long conflict, where they already began to see that they had few things to win, and they withdrew their troops from Montevideo.  Southern , a new representative in Buenos Aires in 1848, explained the problems in dealing with Rosas, “now it's been three weeks since the signing of the agreement... I hope he will receive me immediately as appropriate... -And when he receives me he says that I must - understand how his compatriots will see it. receiving the British representative while the Argentine squadron is still detained by the English”  Finally the agreement was signed in 1850, which recognizes the end of the blockade, the restitution of the Argentine ships, no compensation to the invaders, who suffered considerable material losses, and  Rosas's refusal not to intervene in the Uruguayan conflict, which would eventually cause its fall . Southern, in the final report following the success of the agreement ending the Silver War, and the reason for its rise to Rio de Janeiro, wrote, “ It is not wise to judge slightly the motives of a man who has discovered the means of governing one of the most turbulent and restless peoples in the world, and  with such success that although there is much cause for complaint, and not little dissatisfaction, the death of General Rosas would still be regarded by any man in the country as a direct misfortune. It would certainly be the sign of the disorder and internal struggles, which would lead the country to misery,” says the English diplomat of painful and tragic journey from 1852 to 1880.

We closed with two excerpts from the press, one published in  Le Patriote Francais , and quoted by Andrew Grahan-Yoll, “on November 20, 1845 the enemy's positions in Paraná were attacked by Anglo-French forces. The resistance was stubborn. The combat lasted from 10 am to 7 pm, when all the batteries had been taken, and the enemy was shattered and with considerable losses.  When occupied, the batteries were found 250 dead in one, and 160 in another, all black . Twenty-two artillery pieces were captured. When the enemy's infantry began to recede, her own cavalry charged against her to force her to resume combat. This is how Rosas volunteers fight ” It appears in “El Progreso” of Chile, and quoted by Adriana Amante, “Argentines residing in Chile, who are banned from their homeland, lose the nationality that constituted them an exception and an element alien to the society they live... must be considered as Chileans from now on and gladly accept and deserve a nationality worthy of free men.  The homeland is not in the place that has seen us be born” signed Domingo Faustino  Sarmiento.

Sources: Mistress, A.  Poetics and policies of exile. Argentines in Brazil at the time of Roses.  Buenos Aires: Fund for Economic Culture. 2010; Grahan-Yoll, A.  English. Roses seen by the British. Buenos Aires: Editorial Marea. 2017; Parish, W.  Buenos Aires and the provinces of the Rio de la Plata.  Buenos Aires: Hachette. 1958

109 years ago he escaped, for the only time, a prisoner from the end of the world prison