75 years after the end of the greatest contemporary war, the historic national neutralist stance was cracked and attacked by all flanks. 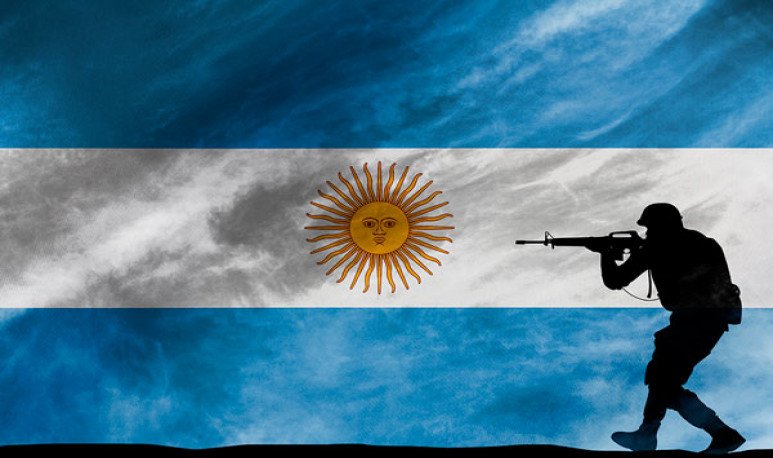 The known account is that  Argentina  declared war when Berlin and Tokyo were burning. On the one hand, the black legend speaks of the sympathies with the Axis of the  coup governments of Farrell and Ramírez , with a “monster”  Juan Domingo Perón in the shadows. Another interpretation defends an Argentinean stance that resisted the principle of American self-determination of conservative and radical governments in the face of the  Great War . “ Yrigoyen  saved with neutrality the new American meaning of life between 1916 and 1918,” said one of his greatest detractors, Carlos Sánchez Viamonte, in “El último caudillo”. More than twenty years later, it was  Perón  's determined action that promoted on January 26, 1944, to break relations with the Axis and, thus, contained the advancement of the fascist and Franco nationalists in the  coup government of Ramírez  . Simultaneously ordered the closure of the “Pampero”, a sustained Nazi broadcasting body said from the German embassy, and restituted university charges that his own military government had stopped by signing a request contrary to the coup of 1943. It governed the state of siege imposed by the —fraudulent —  constitutional president Ortiz . A year later, as vice-president of the de facto Nation,  Perón  with  Juan Cooke  , then Foreign Minister, unravaged the isolation and trade war with which the United States of America had subjected the country for failing to declare the war. Such a revelation arises from the memoranda of State Department officials presented by the American historian Harold F. Peterson. And after that,  Roosevelt  's representatives themselves encouraged the country's entry to the Chapultepec conference, a step prior to the San Francisco conference created by the  United Nations  on 24 October 1945.

A first approach to the argentine stance still discussed during  World War II  could think of  active neutrality , which both nationalist and national sectors were defended liberals. One that had already been maintained by conservatives and radicals even though the Germans had executed an Argentine vice-consul in Belgium and their submarines sank a couple of merchant ships in  World War I . Twice  Yrigoyen  resorted to his constitutional power to ignore Congress's requests to break relations and had popular support. Of course in the forties the situation was different with a weak  president Ortiz  and the bids between the military, several nationalist-oriented, and the conservatives; with a  former president Justo  struggling to return to the Rivadavia armchair. A much more rarefied climate when a commission investigating anti-Argentine activities in Congress denounced a plot of right-wing groups led by fascism admirer  Manuel Fresco, former governor of Buenos Aires province .

New attack on the Republic: coup of 1943

After General Rawson's brief passage,  de facto president Ramirez  continues the Argentine neutralist stance, in a sort of pacifism of the least effort, but also allowed an equidistant attitude that economically intended to be well with god and the devil. And it was sustained by the most pragmatic British businessmen who claimed to prefer “Argentine beef to American pork”, to supply a giant multinational army. From the other corner, in the words of US Undersecretary Summer Welles, the management of the relationship between two historic intimate enemies,  Argentina and the United States , was “total awkwardness.” The  Times  magazine of 20 September 1943 leaks a letter from the then Argentine foreign minister, Pro Ally Segundo Storni, who defends Argentina's historic position of neutrality - and requests war material for the Argentine armed forces that in those years tripled men and accoutrements.

It was directly ridiculed by US  Secretary of State Cordell Hull  in cast letters. He then disseminated an Argentine diplomatic mission to Berlin by Consul Oscar Alberto Hallmuth, of links with the Nazi police, and the support of Argentine military for the “Nazi” coup in Bolivia. Storni resigned a few days after the leak and the government was filled with reactionary nationalists denouncing “American interference.” Over the weeks, anti-liberal measures are taken such as the obligatory nature of religious education in class, or unprecedently totalitarian, and thus the first manifestations of State Terrorism.

No carnal relations between Argentina and the United States

At the beginning of 1943 Argentina was isolated from the rest of the American countries by the US coercive policy which imposed severe restrictions. Only materials intended to operate and maintain refrigerators, several of them North Americans, and tungsten and beryllium, meat and minerals essential in the war machinery escaped the rigorous regulation.

The world war changed from winds towards the irrepressible triumph of the Allies, and the defeat of Nazism, “the world of tomorrow” was hopeful, in the words of socialist  Enrique Dickmann , but Argentines and Americans were determined to discuss obtuse interpretations of the doctrines on the principle of self-determination that both countries had initialled in the nineteenth century. Unlock this diplomatic entuerto was vital for Argentina that had frozen more than $400 million in gold abroad. In addition, no Allied ship touched the Argentine coast.

For the  Roosevelt  administration our country was the “fortress of fascism in America.” And  President Farrell responded to the punches,  “the whole people of the Republic do not defend the interests of anywhere against each other... but the greatness of the whole nation.” And in the streets of Buenos Aires the Liberation of Paris was celebrated and flanked denouncing the Nazi sympathies of the military in power. Jorge Luis Borges  wrote in Sur  magazine on August 23, 1944, “That populous day gave me three heterogeneous amazement. The physical degree of my happiness when they told me the liberation of Paris, the discovery that a collective emotion may not be ignoble, and the enigmatic and notorious enthusiasm of many Hitler supporters. I know that looking into that enthusiasm is to run the album of resembling the vain hydrographers that investigated why only one ruby is enough to stop the course of a river, many will accuse me of investigating a chimeric event. This, however, happened, and thousands of people in Buenos Aires can testify to it,” he introduces a sick chronicle, rare in its inveterate fashion, where foreign and domestic policy was mixed.

An outside that was not as distant as evidenced by an almost simultaneous speech, in the same month, by  Prime Minister Churchill  and, in the midst of the allied victories, has a moment to pose his eyes on these pampas before the House of Commons, “as English I am forgiven for thinking about this moment in another South American country with which we have had close ties of friendship and mutual interests since its birth to freedom and independence. I mean  Argentina.  We all feel a great pity, in addition to anxiety, as friends that we are from  Argentina  for the fact that in these times of trial for nations he has not perceived the expediency of proclaiming himself wholeheartedly, unequivocally and without any reservation or caveat, on the side of freedom, and   has chosen to flirt with evil, and not only with evil, but with the losing side... Nations must be judged by the role played not only by belligerents but by neutral ones. It's not like some small wars of the past where everything could be forgotten and forgiven,” concludes the  great British statesman.

A story of never ending but with a year of start

In the chronicle of  Borges  that defends “a single Order, the culture of the West” a ghost goes through his words and are the crowds of “black heads” that gathered   Juan Peron .  The Argentine statesman under the slogan “understanding and harmony of the classes” also imposed the publicized concept of “Nation in arms”, “true social, political and economic solidarity must be established in order to develop in the population a severe meaning of discipline and individual responsibility” Hence the assimilation of fascism that José Luis Romero and Gino Germani would give academic luster in the 1950s. Undoubtedly  Perón , like several politicians of the time, was marked by the anti-liberal and fascist governments of the thirties, but it is worth remembering that the founder of Peronism resumes the concept of social justice of the French Revolution. And that the rights of the Peronist worker have their origin in the social doctrine of the Church. It is worth mentioning  Thomas Eloy Martínez  that in “The memory of the General” (1996) he refers a story of Captain Augusto Maidano, a very friend of  Perón on  that “black” trip to Mussolini's Italy. There he recalls that the future  three-time constitutional president of the Argentines  “laughed at the ridiculess of fascism”

Between 1943 and 1945, a “civil resistance,” as Alejandro Korn called it, will form and which nucleus the struggle against the military dictatorship and the anti-fascist front of Acción Argentina. That will be the basis of the  Democratic Union  that will face Perón   in the elections of 1946. Composed of university students, political parties, from radicalism to communism and people from the upper and middle classes, he had the explicit support of US Ambassador Braden. These groups  at the end of World War II , on September 2, 1945, regretted to feel the Allied victory “as far away” and expressed irrepressible revanchism. Manuel Ordóñez writes in the “Antinazi”, “the whole world exulted joy. And it must have been for us too... instead the streets have been the police... once again we have been against our will separated from the world.. In this war the great Argentinean ideals were at stake... but it will be ours the final victory... the bells with which the world was announced Peace in Rome have not been heard in our city: Buenos Aires is busy and on the war. Freedom, Freedom, Freedom” A few months after assuming the  presidency Perón,  in the cleanest elections known so far according to veedores international, says “we live a new era in the life of the Nation, one that affirms moral principles of coexistence that had been forgotten to the detriment of the people” Two paths that face the two biggest unresolved problems in Argentina, the harmony between freedom and social justice. Two positions that still in 2020 repeat and crack national thinking and suffers the citizen on foot. And all that began in 1945 when a new world was born, the bipolar of the Cold War, and, at the same time,  Argentina  of the twentieth century.