Home Argentine History And the light was made: history of the Argentine laser

From the supermarket to the surgical room, the laser is and will be fundamental. An Argentine history with a world pioneer from Mendoza. 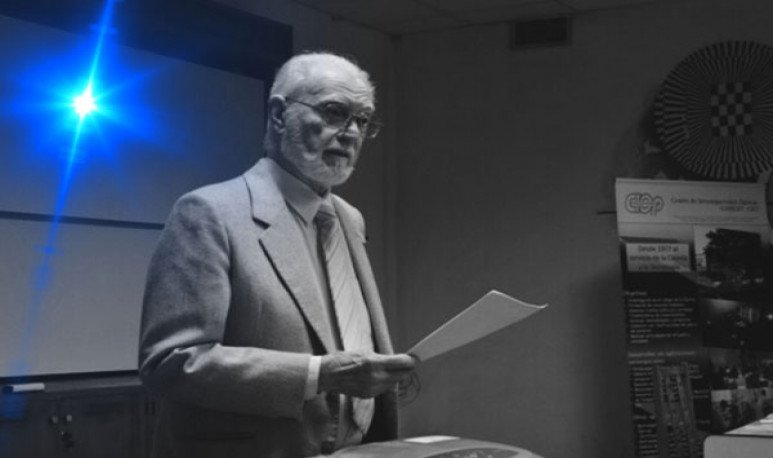 To think that the laser is only sixty years old. And there is no portion of today's life in which “Amplification of Light by Stimulated Emission of Radiation,” or in its well-known acronym “Laser,” something  Albert Einstein  had predicted in 1916. Civil, commercial and military uses, from air controls to audio and video players, to the missilistic remote control systems, take advantage of the pioneering developments of German Rudolf Ladenburg and Soviet Valentín Fabrikant of the thirties, and that would only be made concrete with the first device patented by Theodore Maiman, in the Laboratories of Hughes Research, California, in 1960.In our country began that same year with the reports of the professor of the  University of Buenos Aires (UBA) ,  José F. Westerkamp, to the Argentine Physical Association (AFA) where the possibilities of radiation were discussed in both microwave and light. Already at that time an advanced group had been formed in the Physics department of the Casa de Altos Estudios Buenos Aires with  Westerkamp, Jorge Trench  and students of the race. They worked at the university of rector  Risieri Frondizi  (1957-1962), brother of  then-president Frondizi ,  who promoted research, dissemination and excellence academic in an area that is still today the most important in Latin America. And the winding race for domestication of the national light was underway.

In August 1963  Westerkamp  attended a symposium on quantum electronics and coherent light in Verona, Italy. There he is excited about the development of helio-neon and ruby lasers. And with three hundred dollars out of his pocket he buys a ruby bar, the key piece for the start of the Argentine laser, and the only one that was not nationally manufactured in the device that was just to be finished in early 1965. Simultaneously, one of  Westerkamp's collaborators, Néstor Gaggioli , built the first helium-neon laser on the Continent and experimented with audio and television broadcasts. It was an advance of what we know today as optical communications.

“ Other is to say - Westerkamp tells Hugo Scarone - that both cases - both lasers were tested at once - obtaining the laser beam produced a great stir in the laboratory and that even today -1976 - it is remembered how the continuous red beam of helio-neon was taken out by mirrors along the extensive corridor of Pavilion No. 1 of the University City, celebrating success with the most varied exteriorizations,” he commented with a romantic halo that moment, which was supported by the firm advances that were verified at  the University of La Plata, Bahía Blanca and the UBA Faculty of Engineering.

Mario Garavaglia  is a year later, Gabriel Bilmes notes, along with Mario Gallardo,  the Laboratory of Spectroscopy, Optics and Laser (LEOL) in the Department of Physics of the National University of La Plata (UNLP  ). The LEOL activity advanced in the development and construction of gaseous lasers, mainly nitrogen, mercury and noble gases. There they performed their doctoral theses in laser, and spectroscopy, researchers who would later continue their careers abroad. One of them, Héctor F. Ranea Sandoval, remembered what our scientists' daily life was, “the working conditions were rather precarious. Two by three, the university was closed because of political problems and problems in the sewer and the drain system. Literally we were flooded with labs every time there was a heavy rain. There was a large flood that left the basement of the laboratory where the holography part and the development of a laser was unused... It was all under 90 cm of water and deteriorated most of the little equipment we had. Once I received a high-voltage discharge because I was working almost in the dark, it started to rain and the lab began to flood without me realizing it,” he recalls the mid-sixties, with less romanticism. Towards the end of the decade, the nefarious “ Night of the Long Canes”  (1966) under the de facto president Onganía  , with the exodus of the best minds and the dismantling of laboratories, and the erratic intervention of the military, through the Force Á with the Laser Group of the Center for Scientific and Technical Research of the Armed Forces (CITEFA), led to greater difficulties for researchers, and the development of Argentine laser, until two thousand well entered. And they barely survived in the 1990s when an Argentine economy minister “sent scientists to wash the dishes”, which caused the second major brain drain of the last century.

Pepe, it's not the connecting rod. A grotesque well Argentinean.

As  Marcelino Cereijido , a notable Argentine physiologist and disseminator who went into exile in 1976, says what is fatal in our leading classes, both governmental and intellectual from all ages, is “scientific illiteracy” that is the little understanding of the science básicas and its applications, their real needs and actors, and inclusion as a vital strategic resource in development. An example of this is the story of  one of the parents of the Argentinean laser ,  Westerkamp , when he says they needed foreign helium, in the mid-seventies, for the laser machine. And that they could not acquire them because of the de facto government's obstacles, and then Peronist, “the saddest thing about the matter is that our natural gas has almost one percent helium, as I could find out after multiple dealings at  YPF -Oilimientos Petroolíferos Fiscales -  This is a wealth more than enough to install a small helium plant to meet the demands of the helium market,” he adds something that happened just twenty years later. And expands with the detail of a spare for a liquid air appliance, also necessary in operation of the laser that worked in the  Faculty of Exactas of the UBA , “which stood for years because we could not buy it because we asked for help from the military and, that, made them summarize us from the deanship of the Faculty... it should be borne in mind that at that time several professors have been able to buy it.iacute; contested masters contests promoted by the dean in question, suggesting that it was a simple retaliation, although it greatly hurt our laboratory, the Low Temperatures and all the laboratories that used liquid air”, closes a story that could only be unlocked a few years later, at double the original cost, and with bureaucratic transpapelo, he did not have a happy ending: the connecting rod sent did not correspond to the team. Only by the next decade could the equipment be restored despite restrictions on university budgets with the return of democracy. From the mid-eighties the first Argentine lasers were installed in hospitals (scalpels), and in research laboratories and military equipment in the country (rangefinders).

After the scientific abyss of the nineties, in the  only Spanish-speaking country with three Nobel Prize laureates in science, Bernardo Houssay. Luis F. Leloir and César Milstein , in the new millennium begins a slow recovery in the subject  , although there is not yet a state or university policy that encourages study from one of the sources of humankind's social and economic development, the laser. Bilmes graphs a ralo panorama, “there are currently twenty research groups in the country and just over 200 professionals — most of them physics, chemicals and engineers — working with lasers on various photonics (electronics + optics), in applications in optics, physicochemistry, in communications, atomic and molecular physics, in the study of materials, in nanotechnology, in biology and biomedicine, in microscopy and in the restoration and characterization of objects of patrimonial value. They are located in the main universities and research institutes in the country, in the City of Buenos Aires, La Plata, Tandil, Campana, Córdoba, Tucumán, Rosario, Salta, Corrientes and Bariloche. Most of these groups carry out an important task of training human resources, students and graduates in Physics, Chemistry and Engineering. They maintain regular contacts and agreements with other Universities and Institutes in Latin America, Europe and the United States and regularly publish original papers in national and international scientific journals. In some of these centers specialized courses are regularly held for professionals from the country and abroad,” the researcher points out the importance of Argentine laser in the recently launched local satellites. And the Argentine light was made in space.

In 1922 the Mendoza surveyor  Enrique Gaviola  studied in Berlin and rubbished with  Max Planck, Max Born and Einstein  . Not bad for a boy from the pampas. He had been a disciple at the University of La Plata by  Richard Gans , a German scholar who formed physicists such as the Argentine pioneer  Margrete Heiberg . When he finished his specialization in physics, with outstanding,  Gaviola  decides to continue his work in Baltimore but is rejected by “South American” Indignado the  Nobel Prize (1921) Einstein i  ntercede to the International Education Board, in support of his application, and is the  first Latin American scholar in science Rockefeller . There he works in the laboratories of Robert Wood, the most important experimental physicist of the moment. In that environment he published in 1928 “An Experimental Test of Schrödinger's Theory”, about stimulated atomic emission, and  simply marks the beginning of the Laser Age.

It is ahead of the works of Germans, Americans and Russians who will develop much later practically laser theory under its principles. He says Dr.  Mario Garavaglia  , “finally and revealing that the work of  Professor Gaviola had been ignored in time, in the late '50s, the Russians Butayeva and Fabrikant, report the discovery of negative temperature (amplification and(n) in a mixture of mercury and hydrogen vapors, partly repeating the experience of the Argentine researcher of the year '28, without  naming it”, points out of whom he is known in theacademic circles  such as “ the Schindler of scientists ” because he gave shelter and collaborated in the transfer of dozens of scientists persecuted by Nazism.   Gaviola  was a straight teacher and counselor to influential Argentine intellectuals, including epistemologist   Mario Bunge .

Although the same  Gaviola  (1900-1989) never related the results of his scientific work with the development of laser, since its field was astrophysics, he could have in life a well-deserved recognition, “During the meeting of the AFA - Argentine Physical Association - Bariloche 1980, CIoP - Centro de Investigaciones Opticas - awarded  Dr. Enrique Gaviola  a medal of merit for his work in the Optics Area. Some of those present, including the author of this story, —researchers who had worked for more than a decade in Laser Physics — and with the leading scientist in front of them, were not at that time in a position to express the recognition that would be possible today. That's why: “Sorry Professor, we didn't realize it,” an excited  Gallardo ends  in April 2020 reminding a  teacher -forgotten- of Argentine science  .