One of Argentina's nineteen hundred cultural animators imposed on posterity an image of Jewish immigration. 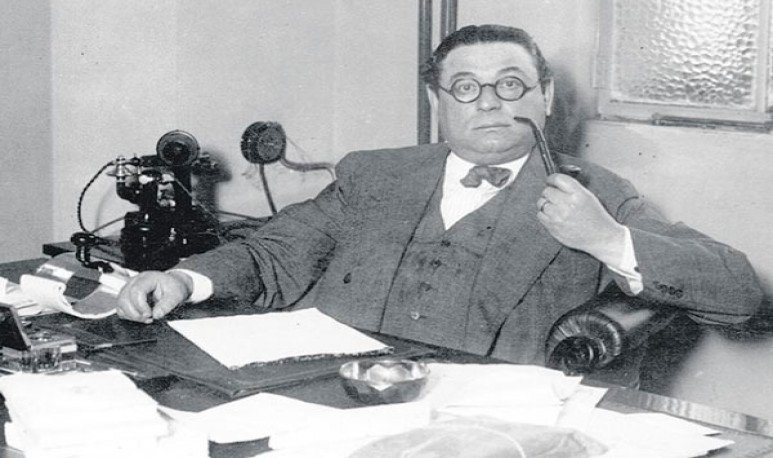 In the previous years of the  first centenary of the   May Revolution,   Buenos Aires was ravaged  . It was a feverish city that had tripled its inhabitants since 1880 with immigration, and that had become a Tower of Babel, from Alvear Avenue to Almirante Brown. Tanos, Turks and Galicians formed a cultural salad that nourished Argentine roots.  Alberto Gerchunoff  arrived in 1895, from the Jewish colony  Rajil, near Villaguay, Entre Ríos  . “In Rajil it was where my spirit was filled with the legends of the region. The traditions of the place, the memorable facts of the payment, the illustrious actions of the warriors... through the gauchos, naive rhapsodes of the Argentine past that opened my heart to the poetry of the countryside... saturating me with that proud freedom, that love of the Creole, the native... that erased my origins and made me Argentinian” says in his “Autobiography” (1924) this writer and journalist born in Proskuroff in 1883 under the anti-Semitic persecution of Russia by Alexander III.

To erase the origins was an aspiration of a persecuted people destined for death in 20th century Europe and, at the same time, a song to integration in a country that constitutionally promised “to govern is to populate”. In this hopeful climate  Gerchunoff  found a ladder that found him at the turn of the century as a street vendor, there the masterful story “The day of big profits”, and, ten years later, among the leading journalists in Buenos Aires in collaborations with  “ Caras & Caretas” and the newspaper La Nación . On these pages you will see the light of the twenty-five stories that will make up a best seller of 1910,  “The Jewish Gauchos ”. In addition to the undeniable opportunism of glorifying before Infantas and diplomats a country “melting pot of races”, the impact of  Gerchunoff  is also explained by the  birth of the modern writer in Argentina  .

With  Mitre,  Sarmiento  and Hernández  , the writers became journalists, who carry out a career linked and funded by political factions. Since the end of the 19th century, the Argentine cultural industry began to become professionalized, with its large print journals of almost 20,000 copies, La Prensa, La Nación y La Razón (inventor of Quinta and Sexta in 1905 ), and modern printing presses to throw thousands of books and magazines such as Rosso, Kraft and Estrada. Such editorial machinery needs many and more hands and minds, professionals of writing and ideas, and it will be those who arrive in Buenos Aires who occupy the front lines. And we do not talk about foreigners, who were 300 thousand over 500 thousand inhabitants. The first modern writers, who wanted to earn a living with their pen, the crazy bohemian in the 900, who will repudiate great figures like Manuel Gálvez, were mostly provincial like Ricardo Rojas or  Leopold Lugones . In  President Figueroa Alcorta  's Buenos Aires artistic modernity came from the Interior — and from Nicaragua, Rubén Darío through.

The farmer and boyman who invented the Jewish gauchos

It would be inaccurate to say so, since  Gerchunoff  himself attributes to the author, between fiction and reality. In truth, the writer takes up the words of the poet Favel Duglach, who together with Rabbi Abraham, are the endearing characters of his Entrerrian chronicles. Among the creoles are Remigio Calamaco, a boyman, cows caretaker, consummated payador, and Estalisnao Benitez, last of the braves of Urquiza. Landscapes and settlers are the actors of costumbrista cartoons, not alien to the irony of the writer, which show an open country, without cultural or racial barriers, in peace.This pristine amalgam is remembered in the “El Anthem” when the colony wanted to celebrate  May 25.  There was a detail.They did not know the national theme or the color of the Argentine flag — which also reflected the solitude of the pampa gringa, and its pioneers, just over a hundred years ago. “I remember,” said the rabbi, “that in the city of Kischenef, after the killing of Jews, the synagogue was closed because we did not want to bless the tsar. Here no one forces us to do it; that is why we bless the president... Jacobo explained to don Benito Palas, a creole who has not been understood, the meaning of the speech. And for all answers, the commissioner recited the stanzas of the hymn. The Israelites did not understand it; but when they came to the word freedom, the memory of their former slavery, bitterness and secular persecutions suffered by the race, stirred their hearts and with their hearts and mouths, all cried, as in the synagogue, amen!”, closed  Gerchunoff  in a postcard embellishment, according to the spirit of concord of a double immigrant, provincial and Jewish.

The style of the book combines a rhetoric that wants to recover the brightness of the Spanish language, prior to the Inquisition, the world of castles, Moors and Jews, in the line of the criolled modernist Enrique Larreta, and the construction of scenes that seem torn from the leaves of sacred books juds. To the rhythm of vidalitas and psalms, of course. Small biblical blessings appear in the fruitful crop and there is no shortage of locust plagues. “La orcherta perdida” is another vignette that countess the solidarity of the colonists and creoles, chasing away insects with cans, bags and screams. And a girl who covers a rose bush with her body in an almost divine image, “we returned sad and rude. The matarife mumbled curses as he began the evening prayers. And when Don Gabino came back with the cattle, you could only hear in the colony the crying of the women and the barking of the dogs.”

“I admire both the gauchos and the Hebrews of ancient times. Like these, they are patriarchal and noble,” says our hero Favel. The desire for “peace and integration” that goes through “The Jewish gauchos”, with beautiful metaphors of suns that “bathe” the countryside or “laborious reconciliations” of men and women who cross the land “promised freedom, the new Canaan”, deformed the shock cultural of two worlds, one for getting lost, the gaucho, and another for tomorrow although with few happy endings. One of his toughest critics was  Jorge Luis Borges  who, still imbued with the creole myth of courage that he would later renounce, clearly marked that there is no continuity between the gaucho, with a way of life constanced with the nomadism of the campaign, and the Jews, who brought the sedentary and organized life of the chakra into the countryside. On the other hand, Borges did not believe the naturalized Argentine Jews, but quite the opposite, and therefore made the fable of  Gerchunoff every time he could.

The pampa gringa to the Disney

Certainly the objections that most affected  Gerchunoff  were those of  Roberto J. Payró  , his mentor, “the whole outer part of his book is first order; in the intimate part, in the “soul” of the book, something is missing...where is Rajil's discontent? where did he return to the weary trade of the fertile land? where is the one who, discontent with the Russian autocracy, was not satisfied with the South American pseudorepublic, and dreamed of greater and more beautiful democratic-humanitarian perfections,” he ends by looking back half of the 5 million immigrants who arrived in Buenos Aires who returned before 1914, and foreshadows the anti-Semitic pogroms of the Tragic Week of 1919.  Gerchunoff  continues to celebrate the “melting pot of races” until his thirties, and only with the rise of authoritarianism in Argentine society decided to concentrate his prose on the defense of that freedom and peace he longed for when he arrived in Villaguay in 1891. And she had already been hit by reality with the murder of her father by a drunken gaucho, a few days after arriving in the country, in a cruel parable that can be read without sweetening in the cartoon “The Death of Rabbi Abraham” of “The Jewish Gauchos”, perhaps the ú only told without sentimentality or patriotic bandages.

“It is therefore appropriate to persuade well-intentioned people... that the world is not only attending a war of nations — World War II — but the struggle for a certain type of civilization... the danger that threatens man's dignity, which is precisely the end of society... Hitler is the devil” sentence a militant  Gerchunoff  in the anti-fascist publication “Argentina Libre”. We came to the epilogue of the long career of an unclassifiable writer, ranging from the political and philosophical essay, “The Jewish Problem” (1945), to the literary and autobiographical, so well represented in “Small Proses” (1926)

He died in 1950 being a staunch critic of tyrannies and disenchanted with Argentine myths, their leaders, the pampa gringa, “to manage the promise, to manage hope, to keep divided the nuclei of opinion to be the only point of coincidence, is the wisdom of the great polyiacute; tico, the technique of the warlord, the mastery of the American conductor of men... it is very difficult to be a good warlord. It is the job of the tracker, the profession of the Baqueano”, explains in the magnificent “The important man” (1934), the portrait of a political ascendant whose merit is not to get involved with any idea, “to say, which is a vocation of the statesman, is to distance sympathies. Judging ideas and men is disagreeing with ideas and men. It is a disease of civilization. It's the disease of thinking. “They answer the politician. “It's character. And he answers - Character is also a disease,” wrote the pessimistic writer, who refused to be an academic in the Infamous Decade. A forgotten book by the Jewish gaucho, the labrador and boyero  Gerchunoff,  who screams to be part of any library of Argentine political thought.