Home Argentine History A review of the Reform

Although no woman appeared in the Liminar Manifesto of the University Reform of 1918, they were there. At the foot of the canyon. 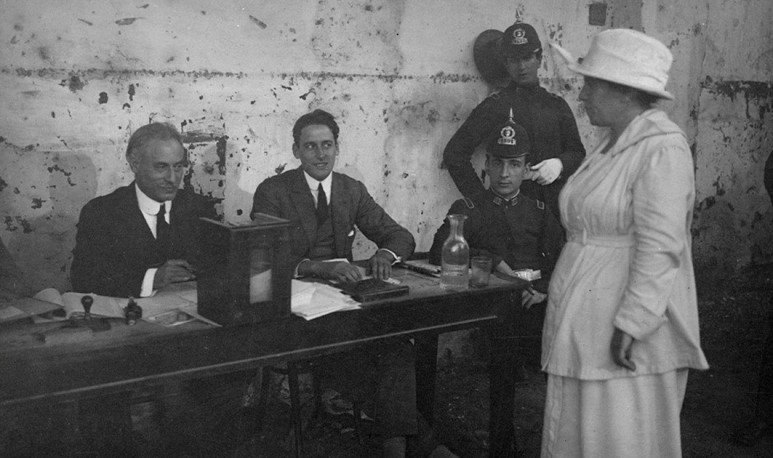 As we already know, history is written only by the winners: only   the winning men.   Leaving a broad sector out of these processes that are part of changes that   constitute our identity today.   As Argentines, Argentines and, above all,   as cordobeses   , we must do   historical reviews   where we can narrate from a holistic perspective.   Without making groups invisible,   nor show only one   history bell   . Because memories and commemorations are built together. We constantly reproduce them and,   as Argentinian citizens,   we have the possibility of   rewrite our history.   Based on research and groups with a gender perspective, work was carried out that could   elucidate the role of women in different historical events.   Events in which the intervention of this large part of the population that make up had never been mentioned before   female identities. The University Reform was no exception.   The group of female students who intervened in this event, or were quested by the reformist struggle, was invisible. Women were part of   reformist movement,   even if the story doesn't show it.   Thirty years ago   that this collective was part of the   National University of Cordoba   like   students and assistants.   Of course: relegated   just a few races.   The University of Cordoba, the oldest in the country and one of the oldest in Latin America, remained almost exclusive to men.

The women of the University, back in 1918,   they couldn't choose any race.   The formations that were allowed to them were those linked   to the care of one another.   For example,   nursing, medicine and, above all, specializations in births.     That is, professions   which would continue to perpetuate domesticity even within the workplace. Since it was about   care tasks   and they didn't get too far from   mandates on the role of women in society.   Even, in order to enter and join as university students, women had to perform a   mental health examination   and   demonstrate their intellectual abilities.   Something that, of course, should not prove to the men who presented themselves to the institution.

Another of the realities that lived   women   graduates from national universities as health professionals were   the low employment insertion   . Many times, his titles were like   decoration of the house.   It is the case of   Margarita Zatzkin, first graduate of medicine   at the National University of Córdoba, as well as pharmaceutical. To her   he was never allowed to practice his profession   , because social demands established that she had children and be a housewife.

Nor for the photo

By 1918, women did not vote   and less than less were allowed to act in the political arena. At least, not publicly. That is why it is not surprising that   no woman appears in the signatures of reformist documents.   The iconic photos we venerate and through which   we revive the   revolutionary moment       who involved   the reform at the provincial and national levels   they do not present women.

But that there were, there were. A clear example of women's intervention in the   reformist activism of the time,   is it   Prosperina Paravan,   who served as vice president of the Center for Students of Dentistry. And he organized a fight against the closure of the boarding school where many students of the Faculty lived and ate. He marched with his companions, organized them and   was part of a new curriculum   in the training of dentists and dentists.

Needless to say, the changes with regard to women's participation in the University did not take place in the year of the Reform, but   a long time later.   All this could be discovered thanks to the   extensive research by thousands of professionals   with   perspective of   genre     , who went to rummage and dig through the documents until they found the traces and evidence of the   existence of reformist women   . Because, for a new society that is equitable and egalitarian, we must review history.