Recoleta is not just a cemetery: it is a space full of art, history and peculiar anecdotes. 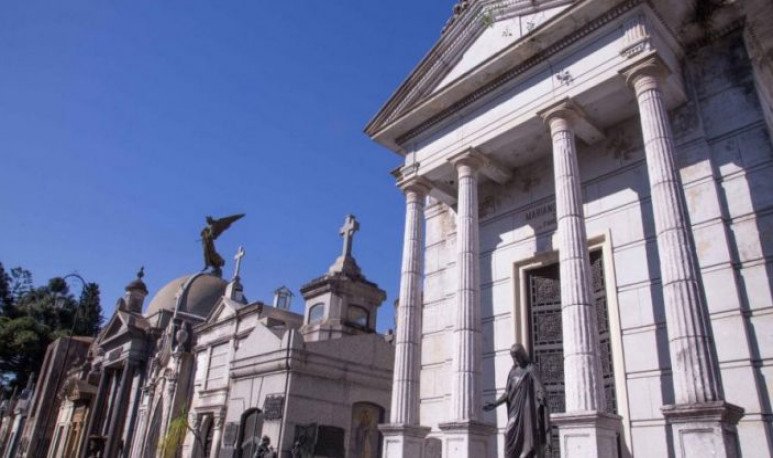 Recoleta is not just a cemetery: it is a space full of art, history and peculiar anecdotes. We tell you some details that are hidden between its vaults and mausoleums.

Caudillo of the province of La Rioja, it is said that Facundo Quiroga — famous for the book that Sarmiento wrote inspired by him — asked to be buried standing because only then could an Argentine man “appear before his Creator.”

The caretaker who found his place

David Alleno was an Italian who worked in the cemetery of La Recoleta. In love with the place, he bought with his savings a vault he cleaned for thirty years. Then he was depicted in a marble effigy, with his clothes and work instruments: broom and bucket. His statue already had the epitaph, dated and all: “David Alleno, caretaker in this cemetery 1881-1910”. Once he finished installing the mausoleum he resigned his post, returned home and shot himself to be buried there.

Salvador Maria del Carril was governor of San Juan and vice president of Urquiza. However, despite its political relevance, its monument represents a curious marriage life. They say his wife Tiburcia Dominguez sometimes spent more money than he was due. Salvador then published a letter to warn his wife's creditors that he would not be liable for his debts. His wife, indignant, swore not to speak to him any more. And he held the decision beyond death: Tiburcia asked that his bust in the mausoleum be placed on his back to the monument of Salvador, because he did not want to “look in the same direction” as her husband “all over the world. eternity.”

Liliana Crocciati was the daughter of a famous Italian hairstyler, painter and poet. He died at the age of 20 when he was on his honeymoon in 1970. That same day, in Argentina, his dog Sabú had died. In the bronze sculpture, Liliana appears with her wedding dress, her engagement ring and, of course, accompanied by her beloved Sabú.

Rufina Cambaceres, who belonged to an important family of the time, suddenly died of a heart attack at the age of 19, in 1902. The day after she was buried, the keeper of the vault made a macabre find: the coffin had shifted and, when she opened it, observed blows and scratches on Rufina's face, caused by her desperate attempt to escape.