Raúl Alfonsín's triumph at the polls not only marked the return of the rule of law, but also inaugurated a new citizen, less supportive, more liberal and legalistic. Even if you don't believe it. 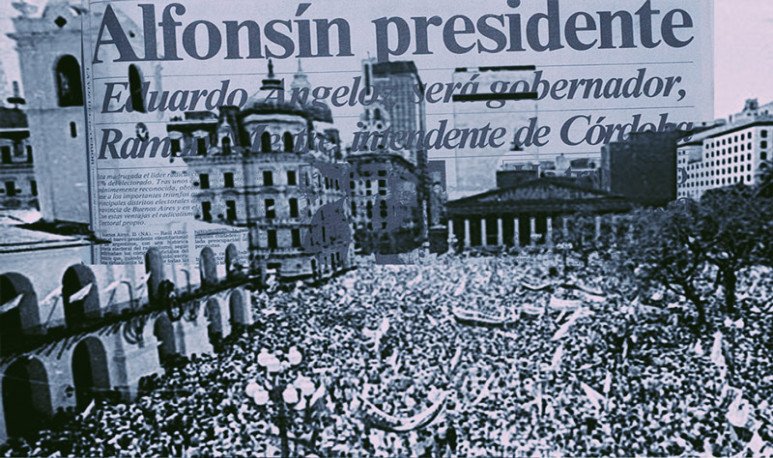 At a time when populisms and governments are discussed, and in the shadow of “let everyone go”, a look at the process that led  Raúl Alfonsín  to the presidency on  October 30, 1983  , projects an unprecedented instance in Argentine history. At the end of the dictatorship, breaking the pendular democracy/coups movement was on the horizon of the entire leadership, even of the justicialists who would later be the Peronist renewal of  Carlos Menem  and  Antonio Cafiero  , however it was the thought of  Dr. Alfonsín  - and his team, later called  Grupo Esmeralda - which would propose a solution within the democracy that emerged in 1912 with the  Sáenz Peña Law . And the serpent's egg was precisely “in the same constitution and behavior of the popular political forces, in their hegemonist pretensions and in their unwillingness to accept pluralism and negotiation, which in the same military praetorianism which was often its consequence”, analyzes Gerardo Aby Carlés, arguing that he was even in contradiction to the Alfonsinist declamation of the Third Movement, and expands that from 1983 onwards, “our democracy has thus taken a specific and hybrid form that is no longer recognized even in the old mold of populist democracy, nor is finally identified in the normative model of liberal democracy, to which it is, by the way, many closer.” The incorporation of an unprecedented liberal inclusive dimension, not the exclusive dominant between 1853 and 1916, is the great legacy of Raúl Alfonsín, which surpasses by being champion of democracy, because from it no force will be able to arrogate the right of a unitary will. Something that is very easy to see with the multiplication of legitimized voices on the political scene that cannot be silenced in contemporary tempered populism; one that has continued to live since 1989, more or less close to distributive justice, more or less performing “surgeri; as majors” against inflation, following some, being welcomed by others, or in a country for all.

“Democracy is eaten, democracy is educated, democracy is healed, we do not need any more,” said  Alfonsín campaign in 1983, the last multitudinous Argentinean  - to stop us from boring, to stop us from managing the financial homeland, to stop us from managing the Minorísas aggressive, totalitarian, unscrupulous who, for lack of votes, seek the boots to manage the Argentine people,” closed the radical denouncant candidate of an infamous military-union pact, who sought impunity for those responsible who had  decimated a country. , he had rushed to imagine an amnesty like that of 1973 but did not understand that the country was another, and citizenship, too.

Another historical line arises then, not the liberal of the  Men from Mayo to Roca,  nor the other of the mass democracies from  Yrigoyen to Perón  , but a different one with fewer monuments and bombos, more respectful of laws and society, one from  Urquiza to Alvear  .  Alfonsín  wanted to join in this tandem of major national agreements and plurality in respect of differences.And it could not so much because of its own limitations, its political essence was always closer to intransigence, as to the external c onditionants of the economy,  enemies National Coordinating Board? Wayward ministers?- and the opposition forces.

Thirteen general strides,  one a few months after the assumption, were the insurmountable response to any radical attempt at direct dialogue with the workers' and unemployed bases. Nor did they help their early attempts to undermine trade union power with the unconsulted Trade Union Reform Act, or Mucci Law, as it put forward in Congress on the glorious  December 10, 1983, the day of full democratic return,  “we must help the birth of the new union, which will have national and economic power, but it must have, fundamentally, human content. The new union must be organized from the bottom up, reaffirming its roots in the grassroots and within the Republic,” he said applauded. Alfonsín was the only president who seriously faced trade union power, and he did so long before the most remembered whistle of the Rural in 1988. And he lost. The rest is known but no less sad: early delivery of power in 1989 to a Peronist president who was in power for ten years.

There was no shot of the Bastille

It is also a key to liberal democracy that does not end up being “Clearly there is now a remarkable sense of freedom, justice and distention. This can be positive as people are willing to put a little shoulder,”  Julio Cortázar said from Paris.  Something that happened on issues related to human rights but remained in the advancement of citizens' conscience and solidarity. Unlike other moments of greater unity for a democratic society, 1945 or 1973, the arrival of the vote was largely a consequence of the debacle of the last military government, after Malvinas. To the 700 braves who died on the island we owe a lot of this democracy. The defeat definitively removed the military from public affairs, who dreamed  of the self-called National Reorganization Process  as the golden brooch of the authoritarian coup initiated against  Yrigoyen  , and, above all, there was a discredit for the armed forces - which still persists - without return. In the midst of the regime's discalation, which agreed with the trade union forces without contact with their bases, the society expressed an unusual hasty against the old leaders. At first quietly, then screaming, the Argentines needed a figure that gathers the turn of the page. And that was  Alfonsín , who had reinvented radicalism and his figure, accelerated also crashes by the death of the old radical leader  Ricardo Balbín in 1981.

That sense of justice was one of the main pillars that supported the radical candidate, but he had a different interpretation of the “Judgment and Punishment of the Guilty” first appeared in  the March for Life in October 1982,  organized among others by the  Mothers of Plaza de Mayo. While the “horror show” was inaugurated at the beginning of the following year, with dozens of denunciations and opening of NN tombs in the Conurbano Bonarense  , the future Minister of the Interior, Antonio Troccoli, drafted together with the law philosophers Jaime Malamud Goti and Carlos Nino an intermediate exit which does not sink into a newly recovered democracy. In addition, they were the times in which international law questioned the law of Talion applied to the Nazis since 1945. The proposed trial limited to domes for crimes against humanity, including the guerrilla groups of the seventies - but excluded the same military before 1976 (sic), was thus germinated among future national leaders and due obedience. A few weeks earlier Alfonsín assured that if elected he would distinguish “those who planned and issued the corresponding orders; who acted beyond the orders, driven by cruelty, perversion or greed, and who strictly complied with them,” he closed four years.before the “Happy Easter. The House is in order” in front of the military uprising “carapintada”

It also begins to argue that Argentina “innocent” was destroyed by two tongs of terror, the guerrilla and the State Terrorist. He presented for the first time the “Theory of the Two Demons” and, at the same time, disclined responsibilities in civil society, something that is removed from its attitude to political violence in the  president's government  María Martínez de Perón  (1974-1976)  according to Emilio Crenzel. And it begins to take shape the idea of a commission of notables, under their political control, which could contain this limited idea of justice and, moreover, the claims of human rights bodies. The reality is that the action of  CONADEP - the National Commission on the Disappearance of Persons -  in search of truth “without limits” shocked the radical government, and enmity many of its voters, as it showed that “there were no excesses or errors”, and that a systematic plan for the disappearance of persons had been established, with hundreds of persons responsible outside the domes. And this spirit of search for truth without filters is still a shock wave that is far to be closed with the “cascade of justice” Yet another achievement initiated by  Alfonsín in that 1983  is that personal vengeance has been banished, that in the old country of the deguello and that is quite enough, and that conflicts must be settled on the judicial stand. So an unprecedented citizenship emerges with their eyes very attentive in the judicial institution, and that transcends circumstantial names that may be discredited.  Alfonsin, he did it.

In the days prior to the  election of October 30, 1983  , two mass rallies exploded 9 de Julio Avenue. With a million people,  Alfonsín  would say, “There are not two peoples, one radical and the other Peronist, but only one... Argentina ends with dead factories, speculation and bullies.” Two days later,  Luder  before a million and a half, would ensure a sure triumph, something that did not throw the polls but it was a widespread feeling, even among radicals, and watched astonished as the candidate for governor of the province of Buenos Aires, Herminio Iglesias, burned a drawer, and flowers, with the colors of the Radical Civic Union. A gesture that is often seen as the mother of defeat but was nothing more than a long chain of errors — and traditions — within justicialism, which had seen a violent process in the election of its candidates.

A significant part of society assumed throughout the campaigns that the imperative aspects of the social and political order should be solved, and that Peronism was part of the problem itself. So important was this notion that 52% elected  Raúl Alfonsín  as the  twenty-ninth Argentine constitutional president ,  a native of  Chascomús  , who had declared very early that day, “today a different Argentina starts” And which ended up saying at  4 o'clock in the morning of 31 October 1983  before thousands of voters, including radicals, Peronists, socialists, workers, unemployed, social activists, housewives and all voices, all, “this day should be recognized by Argentines as everyone's day. We won, but we haven't defeated anyone. We raise the flags of national unity, raise the flags of democratic coexistence, raise the flags of social justice, solidarity and fraternal aid. And that way we have to work ahead. It's not going to be easy, but there will be nothing impossible for an absolutely determined people who want to occupy its rightful place... Let's end the day decentralizing peacefully, and accordingly, to go and savor in the intimacy of our homes a joy that will last for many years.It ended up a couple of years before his economy minister, in the jaws of hyperinflation, would say resigned “I spoke to them with my heart and they answered me with my pocket” “We will make hope of regaining life, justice and freedom... We have a great deal of life, justice and freedom...eacute; everything: democracy for Argentina” stamped from the Cabildo on December 10.   Alfonsín ,  defender of Argentine democracy, of a possible nation for an impossible country, in his failure we recognize the lost Republic.