Home Argentine History 150 years of the Republic of La Boca

On a different August 29, Boquenses celebrate their neighborhood that travels the world as a symbol of Buenos Aires. 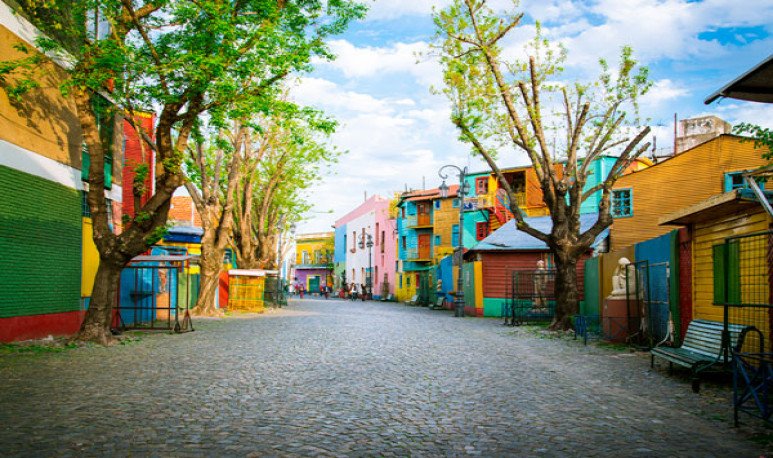 The Boca del Riachuelo. La Boca of bars, canteens and pizzerias. The mouth of the conventillos in multicolored veneer. The mouth of   Caminito .  La Boca del tango reo from Suarez and Necochea streets. La Boca del Puente Ferbordador, jewel of civil engineering of the twentieth century. La Boca de  Quinquela , one of the Argentine artists unfailing in the museums of the big capitals. La Boca of the first socialist deputy in Latin America. The  mouth of Boca Juniors .  The mouth of Buenos Aires.  So many ways to call the same neighborhood, so many La Boca in almost the first postcard in  Argentina  . La Boca is our adventure that begins with the footsteps of the Spanish advancing and is still fresh with the urban renovation project that has the Usina del Arte, and the recycling of the Vuelta de Badaracco, old shipyards, as axes of a new creative district of Buenos Aires.  La Boca is an adventure of talent and work.

From the “swampy valley, desolate and sad” that  Ulrico Schmidl  described in 1536, the German who traveled alongside  Pedro de Mendoza,  at the time the first chronicler of La Boca, to the “Riachuelo de los Navíos/Cradle of Buenos Aires”, loas of the poet Roberto Cupid, weaves a melted plot with the same city. Through that mouth of the Riachuelo the Spaniards marched to the first Buenos Aires foundation, near the Altos de San Telmo —now Parque Lezama— and to their hellish stay of famine and despair. Juan de Garay's entourage looks at those brown, still clean waters of the Matanza River, with great interest because it considered them “ anchorage of its ships and natural port of the city.”  However, until well into the nineteenth century “La Boca del Riachuelo”, in its historical nomenclature, was rather the “distant village of La Boca” due to the difficulties of access by a land that was flooded with ease and tangled willows.

This physical, while cultural distance, “whitish pielago on whose surface some barquichuelos floated to the aventura, and blackened the chimneys and treetops,” wrote  Esteban Echeverría  around 1840, began to provide its inhabitants with their own identity, incomparable with its neighbors in Barracas or San Telmo, or any of the city. This strangeness was also given because their rough workers in salts and barracks were immigrants, although not yet Italian, but Basco-French. It would be necessary to wait for the Italian diaspora, and the failed Roman republic of Garibaldi, to then begin to arrive from the peninsula especially Genoese liberals, the Xeneizi. With the decline of salts, unsanitary and pollution in the years of cholera and yellow fever pests, other more profitable activities begin and a relevant shipping industry begins. Already in 1864 11 schooners and 15 boats of all kinds were built. The improvements of the notable  Engineer Luis Huergo  with the channeling of the river course and the arrival of the railway, which ended a branch in  Vuelta de Rocha  in a road bend through the current  Caminito  , strengthen the economic relevance to the area, which translates cultural institutions and social as the influential Sociedad Unione e Benevolenza. Finally, the Government of the province of Buenos Aires by Emilio Castro decreed, on  August 29, 1870, jurisdictional autonomy and neighboring Sebastián Casares was the first local authority.

And, although Buenos Aires turned its back on the river, and its natural mouth, with the constructions of Puerto Madero and Puerto Nuevo, La Boca continued to be the key area of a nascent national industry, with Belondo & Lavigne, which came to manufacture 20 million matches per day, or the house “Matte” Larangeira”, destined to pack pioneers yerba mate mechanically —current building of a bench in front of Parque Lezama—. At the edge of the twentieth century, the houses formed mosaics crowded on the side of the Riachuelo, built at the height of the ships on solid pillars of quebracho. It was a sailor and proletarian neighborhood. Originals from the Po, Arno, Adige, Italians, who joined the Basques and Galicians, the Austrians of Dalmatia and Croatia, with some Greeks. And, of course, there was always an Arab or Turkish who finished spicing the Mediterranean flavor. With these ancestral lineages, the table was served for the birth of the  sainete, the first Argentine theatrical genre,  among its conventillos and lofters, among a thousand languages and melancholies by the lost terroir. For something you sighs in the  Plaza de los Sighiros  boquense.

Tango  was also cradled in its dangles, corners without ochava and lanterns, in the café de Nani or Café Azul, where blacks and Creoles, many of them Correntinos, other immigrants, were carried away by the swinging of a citizen melody still without lyrics. With the foreign half of its 40,000 souls, many socialists and anarchists, La Boca raises its voice in claims for decent conditions for the workers, and they are examples of Buenos Aires workers' organization, even the youngest, those girls and boys who parade in 1907 with the brooms raised in order to “sweep the owners”. And also his enlightened men are hallmarks in Argentine passions with the founding of the most popular clubs in the country,  River Plate  in 1901 and  Boca Juniors  in 1905.

But it is the artists who place the neighborhood as different within Buenos Aires, and especially their painters. Many of the past, present and future images of La Boca start from the palettes of the Painters del Riachuelo, or the engravings of Los Artistas del Pueblo. From  Alfredo Lazzari to Guillermo Facio Hebequer , the figure of  Benito Quinquela Martín emerges from this essential collective in  Argentine art . It was from the great painter and cultural manager, who still needs more recognition for his enormous contribution to  national and Buenos Aires culture , the idea of offering boquense houses these colors next to the outdoor cultural space, Caminito, and the creation of the educational, artistic and social complex, in lands which he selflessly donated, and which make up the museum-house, schools and the dental center. Blessed Benito. For something the Fundación Proa, a space of avant-garde artistic and education, looks at  Quinquela'shouse.

The decline in the middle of the last century, with the canteens on Calle Necochea languishing, and unneat urban interventions such as the Catalinas complex in the 1960s, an absurd wound in the boquense fabric, correspond more to the abandonment of the various municipal authorities than to the impetus of a neighborhood marked by the work and the arts. Only in the two thousand, with the definitive solution to the floods, La Boca begins a winding recovery although at the moment it is mostly supported by cultural institutions, including young and transgressive galleries, or new nodes of art and training such as the  Museum of Graphic Illustration-Museum of Contemporary Art of La Boca,  or the aforementioned Fundación Proa. A fact that should not be surprising because those who hit the key, or the brushstroke, and who drive the heartbeat of the  Republic of La Boca,  are those who always go back the rivers of dreams of Garibaldi Street or Café Roma.