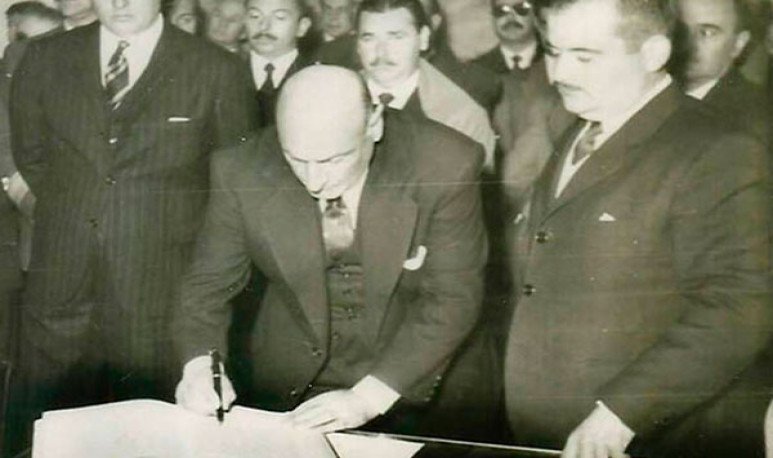 Born in Entre Ríos and trained as a lawyer in La Plata,  Jorge Galina arrived in Chubut in 1927  and, years later, became part of the history of the province, becoming the first constitutional governor.

The son of Uruguayans, Galina was born on August 26, 1900 in  Colón   and studied in the neighboring city of  Concepción del Uruguay , at the National College, founded by  Justo José de Urquiza  in the middle of the 19th century. When he was passing through high school, he began his political militancy in the ranks of the Radical Civic Union.

At the end of his studies he emigrated to La Plata, where he studied law and graduated.1927 was the year of his arrival in Chubut. He first settled in  Esquel  and later resided in Trelew, where he became his final home. There  he married Delia Davies Humphreys, with whom he had two daughters, Delia Dolores and Maria Isabel.

Galina also continued his political militancy in the Pueblo de Luis and, in 1940, was elected mayor of that locality in the Lower Valley of the Chubut River and served until 1943, when Ramón Castillo was overthrown.

Later  he was president of the Constituent Convention of Chubut , when it began to move from being a national territory to becoming a province.

The leader decided to lead along with Roberto Scocco the formula for governor of the Intransigent Radical Civic Union (UCRI) and, on February 23, 1958 — the day on which the presidential elections were held in the country — the Chubutans went to the polls to elect the authorities that would carry out the first constitutional government of Chubut.

A little more than 44 thousand voters attended the polls, who accompanied a large majority of the Galina-Scocco formula. Nearly 20,000 citizens chose the UCRI ballot. Memorious members say that the result was largely influenced by the support given by Juan Domingo Perón in the previous elections to  Arturo Frondizi , who won the general elections.

On May 1, 1958, Galina took possession of the command  given to him by Raul Sidders, and thus became the first governor of Chubut.

During his term of office, the Governor introduced the bill to form the provincial judiciary in the Legislature and, once passed, the High Court of Justice began to function.

It also created the Court of Auditors, the Bank of Chubut, the Provincial Council of Education and the Autonomous Institute of Colonization (IAC), among other bodies that continue to operate today. In addition, it promoted founding laws such as Public Works, Electoral, Tax Lands, Municipalities, Land Registry and Police Organic Law.

On 28 March, Frondizi was overthrown and transferred to Martín García Island. The next day, Major Goizueta, head of Trelew's 26th Military District, wanted to replicate the action at the Government House in Rawson, but Galina's temper and cunning prevented the military from taking power, even by imprisoning one of the drivers of the coup in Chubut, Commissioner Carlos Fontana, who had been dismissed as head of the provincial police.

Thus, Jorge Galina continued to serve as governor until 24 April of that year, when the province was intervened by the de facto Government.

Those who lived in those times remember that, once his term had been interrupted, the radical leader returned to his normal life in his home on the corner of Chile and Belgrano de Trelew, maintaining a relationship of mutual respect with the community