Serargentino.com won the Mercury Award of the Argentine Marketing Association in the Cultural category of the SMEs division. 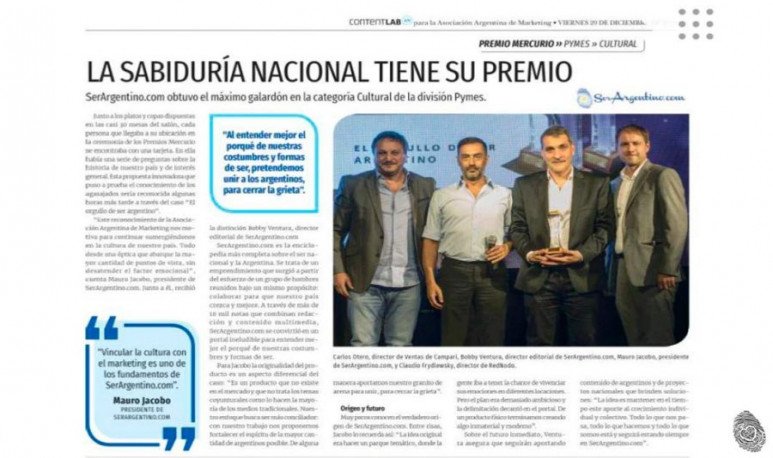 What is it like to be an Argentine ? From that premise, a dream was born. A dream that today is a reality and is already being recognized.  Serargentino.com  first emerged as an idea, then as a project, and materialized in a unique proposal: a website that concentrates all the information about Argentina and Argentines  . A place where you can find everything about being Argentinean, even though it sounds ambitious.

Argentines are diverse, complex and passional. Defining ourselves in a nutshell is practically impossible. Therefore,  Serargentino.com  encompasses the national being from all its facets.  To get to know us and to get to know each other . So that, among all, we can find out what unites us and what separates us. So we can narrow the gap.

On  Serargentino.com  there are no political, religious, sports preferences. From a conciliatory approach, we have  collaborators in all parts of the country  who provide their vision from every corner, so that the content is completely federal. So that the Argentine being is undouble in the particularities of each province. So that  Argentine culture  can be appreciated in all its magnitude, with its differences and common points.

We are from Mercury

Doing something with passion is a prize in itself. But when that passion and effort are recognized, satisfaction is even greater. And so it was:  Serargentino.com won the  Mercury Award   of the Argentine Marketing Association  ,  the most important award of the specialty, in the  Cultural category  of the SMEs division.

With the case  “El pride de ser argentina”  this proposal was presented, the proposal of a medium that wants to tell everything about our country, but  from emotion  . Because for the Argentine emotions, feelings, weigh more than information and data. And that's where  Serargentino.com points.