Water divides the provinces of Santa Fe and Entre Ríos. The Subfluvial Tunnel connects them. Learn everything about this work of engineering.

Recently, the  Golden Wedding of  the inauguration of the  Uranga Subfluvial Tunnel - Sylvestre Begnis  were celebrated. It is a unique work throughout Latin America that connects, under water, two provinces: the province of Santa Fe with its neighbor,  Entre Ríos .

Only 30 kilometers separate these two provincial capitals. In addition, considering the vastness of the  Paraná River, the width of the river dividing the two banks is quite scarce. However, before it could only be reached from one side to the other via boats. The problem is that the famous raft, which still works, took more than an hour and a half. Today, the crossing is made, almost, in seconds.

The construction of this viaduct was the responsibility of the German company Hochtief AG, while the plans were the work of the Argentine company SAILAV S. A.

Although the natural solution would have been the choice of a  bridge , the provincial governments were able to choose that atypical format only because of the lack of cooperation of the national State, which has jurisdiction over the mirrors of water. In 1960 they signed an interprovincial treaty that planned the shared task, and in June of the following year the work began. It was inaugurated on December 13, 1969 and baptized as Hernandarias de  Saavedra , first Creole governor of the  Rio de la Plata , from the colonial era.

The tunnel structure has a length of 2397 m, to which access ramps and convergence roads are added to a total of about 3497 m. It is built on the basis of cylindrical segments of 64 × 10.8 m, coupled and buried in the silty bottom of the river. At its deepest level, the roof of the tunnel is about 32 m below the surface of the river. Air flow is regulated by a forced ventilation system; lighting automatically adjusts to outdoor conditions.

Although the tunnel currently has only vehicular driveways, the infrastructure is still in place to integrate it with the railway layout.

In 2001, after eleven years of work, his current name, “Raúl Uranga - Carlos Sylvestre Begnis”, was established as a tribute to the governors of Entre Ríos and Santa Fe, respectively, who made it possible to realize the work. 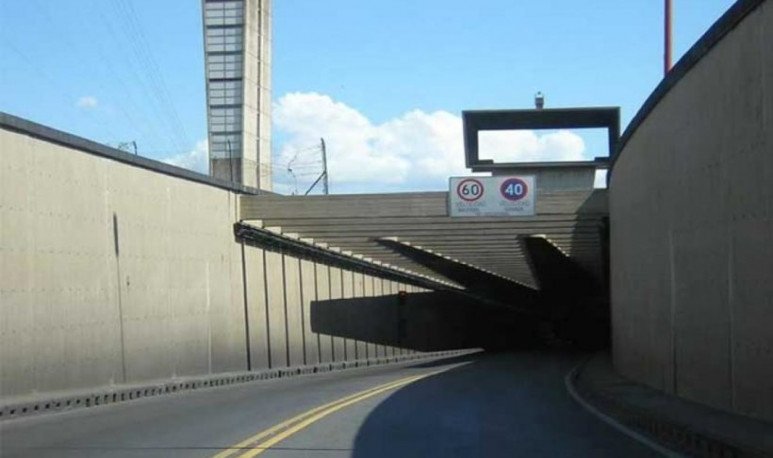