Home Argentine Cambalache The Gorosito: the monument to the oil worker

The Gorosito: the monument to the oil worker

In Caleta Olivia, oil workers have their own monument: the Gorosito. Who built it, when, where and how? We tell you all that and more. 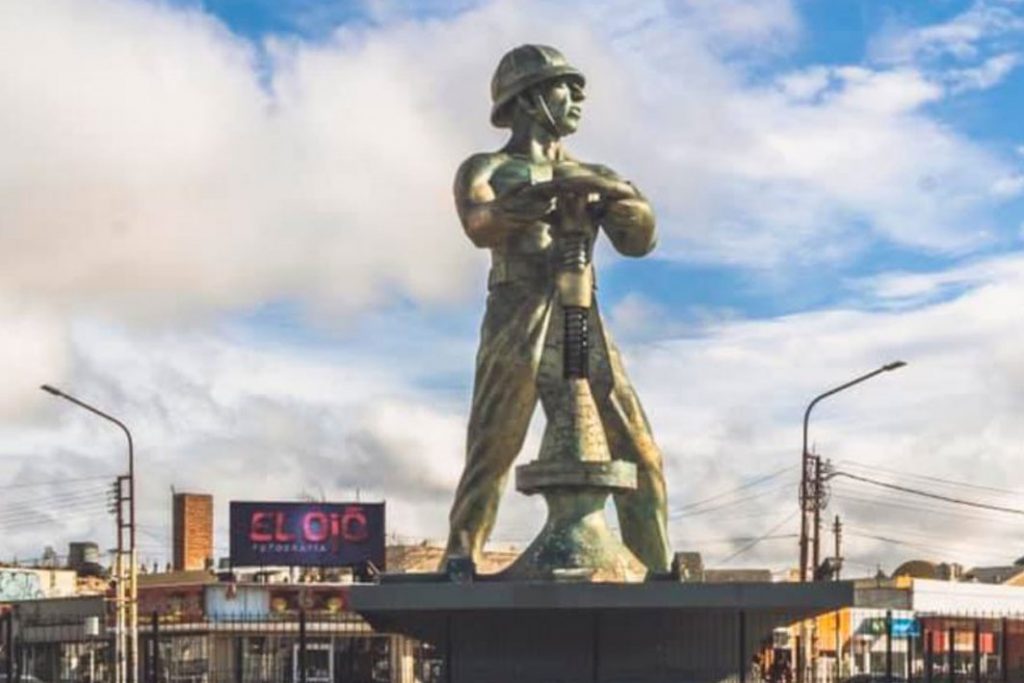 The city ofCaleta Olivia, Santa Cruz province, has the monument to the oil worker, “El Gorosito”. It also symbolizes oil in our country. It is a statue created by the sculptor Pablo Daniel Sánchez and the surveyor José Cifuentes. If you walk through Caleta, you can visit it at the crossroads of the six most important avenues of the city. For this reason, El Gorosito is the most emblematic work of Caletenses. The square and the surrounding environment are the core of most local demonstrations and festivals.

His appearance is shocking. A gigantic man lies at the foot of an oil well, starting the energy dynamics that feeds the country. The monument, about 13 meters high, was inaugurated on 13 December 1969. At that time, the highest construction in the village was not more than 4 and a half meters. The naked torso of the figure represents the man in supreme effort. His gaze to the north shows the attitude of the worker by giving the country the wealth of his soil.

At its base are allusive plates in tribute to the pioneers of oil in Patagonia: Fuchs and Beghin. Also to the fallen in fulfillment of duty and to the institutions that made the work possible. It valve opening represents controlled production and responsibility of the operator in the drill hole. He also pays tribute to all the immigrants from the farthest corners of the country. Those who arrived in the Province of Santa Cruz in search of new horizons.

The Gorosito has a very particular and funny anecdote. In the official inauguration the communal authorities only inaugurated the pants of the monument. It was only 2 days later when the work was completed. 600 people held their breath, while an operator with a crane maneuvered the bare torso of the monument. He did it slowly, placing it by on top of the circle that formed the trousers and ankle boots clung to the land.

As for its name there are several versions. One of them was refers to an advertising of that era related to a brand of sneakers called Gorosito. Designer Pablo Sánchez would have taken that name for baptize the monument.

Fabio Seleme, professor of Philosophy, has published an interpretation different about what the Gorosito symbolizes. If one listens to gestures of sculpture, he says, one can warn that the oil worker is not opening the valve. On the contrary, he's closing it. The monument symbolizes, in reality, the power of the oil worker to claim his labor rights. The look north of the Gorosito would mean a warning to the dominant powers.