Learn how was the restoration of the Rector's Office of the UNL, one of the most important buildings in Santa Fe and a beautiful Historical Monument. 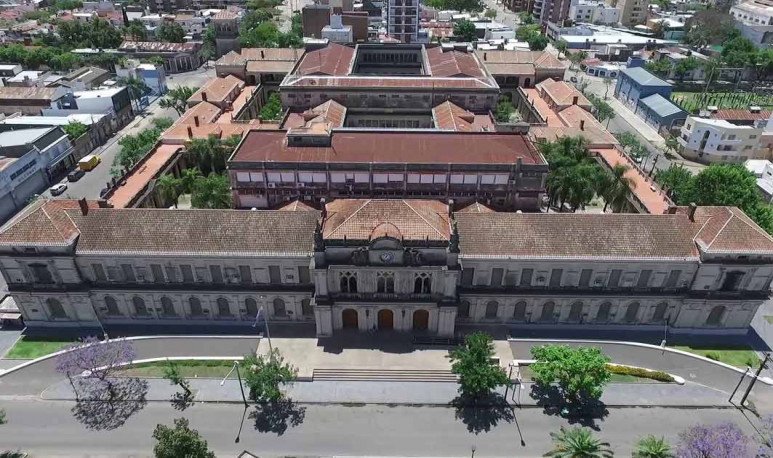 In December 2017 the restoration works of the Rector's Office of the  National University of the Litoral began. That same year, the Congress of the Nation declared a  Historical Monument  to the block comprising the building, an obligatory reference for academic, scientific, cultural and political events, for the city of Santa Fe and the region.

The first stage of the value of the rectorate's envelopes, which stretched for just over a year, involved the cleaning of tiles and the repair of the imitation stone plaster, as well as historical openings and ornaments, among which are the  sculptural group  of Day and Night, zoomorphic motifs in statues and dragons, geometric guards and medallions.

In parallel, works were carried out  inside the building , preparing the facilities for the  presidential debate on October 13. In particular, work was carried out in the entrance hall and in the Paraninfo, on its floors, in the armchairs and punctual interventions were carried out on the ceiling. “In the year of its centenary, the National University of the Litoral, not only celebrates it with university students, but fundamentally with society recovering for Argentines, and Santa Fesinos in particular, the patrimonial value of its central building,” said the rector of the UNL, Enrique Mammarella.

The main pathology presented by the facade ornaments was the loss of fragments, and in some cases complete parts, caused by the corrosion of the iron of the interior structure. “We considered that we had a duty to preserve the building as fully as possible, considering that it is unique because of its features, its  design , morphology and functionality. The first one that was planned to host a national university after the University Reform of 1918,” recalls Laura Elias, architect specializing in heritage science and technology, member of the Office of Building Planning of the UNL. With this starting point they defined “to preserve any original materiality and technology that was still in good condition, and to restore or intervene elements that could not be rescued or which had a degree of deterioration of more than 40, 60 per cent, depending on the type of surface”.

The head of this technical area, Ramiro Piva, points out that “these guidelines, the rod we put on, are the letters and documents that internationally set these criteria for intervention.” The analysis of the materials and the research of the  constructive  techniques allowed that “although today we do not have the same components with which the plaster was prepared,  what we achieve is very close to the original material.  The water, the sun, the air are going to match in its appearance all that epidermis, that skin of the building, and there is going to come a time when it is going to be noticed very little where it was intervened and where the building is totally original.”