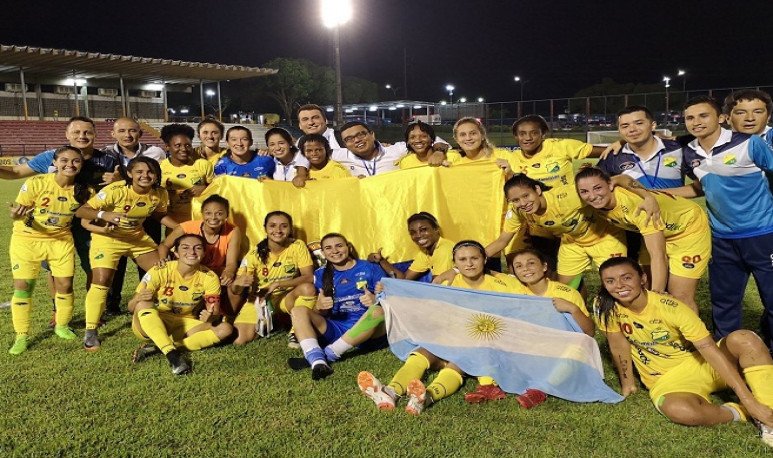 By: Redacción
On November 14, a day after winning the qualification for the World Cup in France 2019, Aldana Cometti and Eliana Stabile embarked on their journey to Manaus, Brazil, with a new goal in mind: the Copa Libertadores. There they met with their teammates from Atlético Huila, the only Colombian representative in the competition. Two more Argentines are part of the squad: Fabiana Vallejos and Lucía Martelli. The road to the title began with a 3-0 triumph against Peñarol from Uruguay. All three goals were albicelestes: Stabile, Cometti and Vallejos scored in the debut. In the continuity of Group A, Atletico Huila suffered his only defeat of the contest: he fell by the minimum against Brazil's Audax. On the last date of the group stage, it was 3-1 victory against Unión Española de Ecuador, with another goal from left-handed Stabile. In this way, Huila ranked first in Pool A, tied in points with Audax but favored by the number of goals in favor. The local, Iranduba, appeared as the obstacle to overcome in the semifinals. The Brazilians took advantage of 26 minutes in the first half and, only four minutes away from the end of the match, Argentina's Martelli managed to score the draw. The meeting was defined in the shots from the criminal point. There, the Colombian team won 3-1, with Stabile and Vallejos converting for the triumph. In the final I expected Santos, champion of the 2009 and 2010 editions. It was not a good start for Atletico Huila, who found himself at a disadvantage since the start of the match. Equality came at the beginning of the second half and, again, the definition came in the penal. Stabile, Vallejos and Cometti converted for the 5-3 that determined the champion. The Defender of the National Team, Aldana Cometti , spoke with AFA's website after winning the Cup: “ It was a very intense month, very moved and very nice to live . When we came to Huila we set two goals: the World Cup qualification and the Copa Libertadores. Luckily we could be given. Sharing this with Eliana (Stabile) makes me very happy, she is a great companion. It's nice to be able to enjoy these moments with people like that” . He also appreciated the fact that he was able to share this achievement with his family: “When my parents told me they wanted to come to the Cup, I took out the tickets for December 3rd, without hesitation. I felt and knew we could achieve it, that we had a goal and a good team to reach the final... And also to win it. Now it's time to enjoy, celebrate, rest, be with the family and then think about next year's goals. Also be attentive to the draw of the World Cup.  We want to know what teams are playing us in the group ” . Source: AFA