Home The myth of Popeye and spinach

Despite this myth, Spinach is a natural resource of vitamins and minerals and fibers 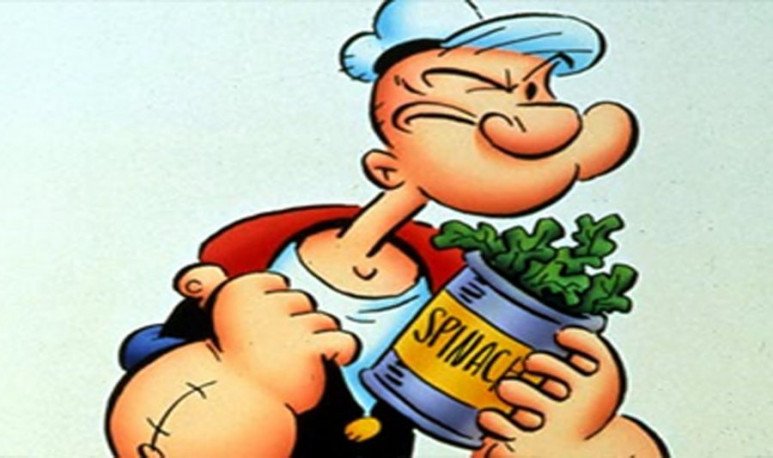 During my childhood, one of the cartoons I liked the most was that uneven couple called Popeye and Olivia; for me they were one of the best. I remember I was so skinny that my old man called me Olivia, and he was telling me if you like to see Popeye as much spinach as he does, so you're going to be very strong. Imagine my answer! It was the time when most houses only ate milanese or steakhouses; if they were not with puree, they would come out with fries... but roast; forget about salads, much less VEGETABLES. Spinach for God's sake! Years later, when I started studying Nutrition, I was with a job on iron in animals and vegetables and there I found out something that for long years of my life I thought was true, but it was just a myth.  I share a textual quote  from the spinach myth of “Popeye”, which originated by the error in a coma.  In 1870, German chemist    Erich Von Wolf  investigated the amount of iron in spinach and green vegetables. Writing his discoveries in a notebook, the expert made a mistake, giving the vegetable 10 times more of the   iron it actually had.  Instead of writing that the food had 3.5   milligrams of iron  in a 100-gram portion of spinach  , the expert forgot the coma, and it was then recorded that the iron content was 35 milligrams   .  While Von Worf's error was corrected in 1937,  when someone checked his calculations and in 1981 the British Medical Journal  published an article in which they denied the myth of spinach, food is still recognized as one of the vegetables with the greatest iron content. His mistake gave rise to Popeye 's obsession  with the vegetable, which he ate in large quantities to increase his strength. Despite this myth, Spinach is a natural resource of vitamins and minerals and fibers. Among the vitamins, it contains Vitamin A, C, E, K, in addition Vitamins of group B, B1, B2, B6, B9 (folic acid). Among the minerals contain Iron, Potassium, Magnesium, Manganese, and Phosphorus., Zinc, Iodine, and Selenium. Consume Spinach, brings many health benefits! Do like Popeye: include it in your diet!!!