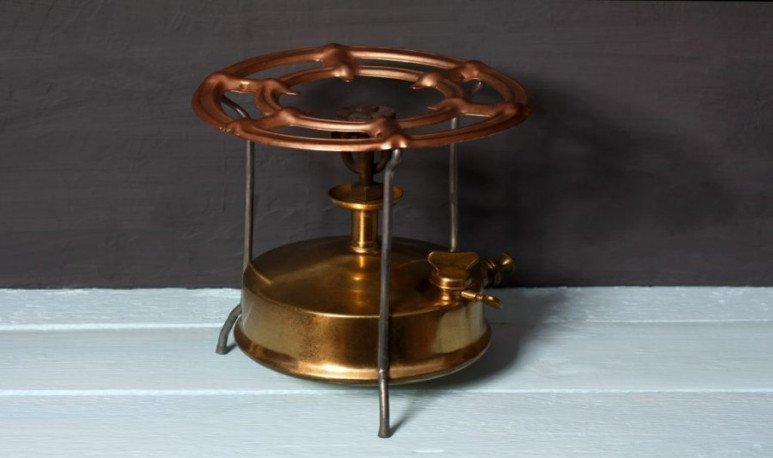 The heater “Primus” came to our country in the first decades of the 20th century and played a very important role in family life.  It was constituted as an indispensable article in all Buenos Aires households. Originally from Sweden, it was built in bronze; it had 3 iron legs and was fed to kerosene. There were three sizes: small, medium (most used) and large. It was inevitable in the kitchen. Housewives immediately adopted it because it reduced the cooking time of food and many looked proud after neatly burnishing it. It was also used as a stove and used to place in a pot water and some eucalyptus leaves, in order to aromatize the environment or, in cases of cold, inhale the vapors by covering the head with a towel. An interesting aspect was the ignition procedure, which often became a real feat. The fuel used to ignite it was burning alcohol, which was poured using an alcuza with a pouring spout and trying not to overflow the circular channel surrounding the lighter. Before the alcohol was completely consumed, and the right temperature achieved, the kerosene was pumped, generating inside the pressure needed to drive it by the lighter. When contacting the flames of the gutter, the artifact was turned on, which emitated a bluish flame. On many occasions, when the temperature obtained was not enough, when pumping the kerosene it volatilized without turning on, causing a huge smoke, forcing the process to restart. Sometimes there were drawbacks when the lighter was covered, due to impurities of kerosene. In this case, a small needle mounted on a metal piece was used, which was repeatedly inserted into the lighter until it was fully uncovered. There is no doubt about the protagonism of the “Primus”. It was common to see it in every middle-class and poor home. Located on a table, drawer or bench, it became the most efficient service within the Buenos Aires kitchen, as it cooked faster than the charcoal burner. It also solved the problems of the conventillos rooms, who were obliged to sleep and cook in a single environment.