Chapter 3 - East Facade: It is the front facing the Río de la Plata. 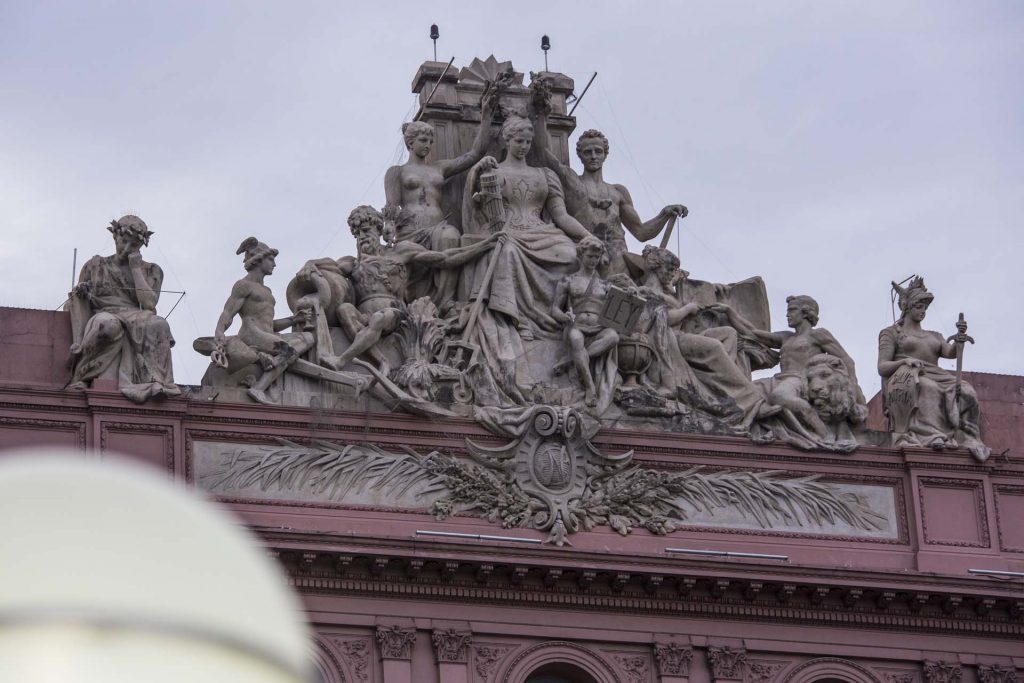 The eastern front of the Government House looks towards the River of the Silver and is the only one that presents a sculptural group. This work, located in the highest part of the central body, belongs to the Italian sculptor Carlos Bianchi and is calledLas Artes y el Trabajocoronando la Argentina .

This sculptural group is composed of fourteen figures of mortar. In the central part, the Republic stands out with a Phrygian cap, sitting on a high throne from which the rays of the rising sun stand out. His right hand is leaning on axes or phases of poles, symbol of power. With his left hand, he points to another figure, the Law, sitting at his feet, which shows tables of stones placed on his lap and where his name is written. The figure of the Republic is crowned by two branches of laurels supported by Labour and Agriculture. On the right, a female figure with a globe, maps and instruments symbolizing Science.

To the left, under Agriculture, is Neptune, who wields its trident and pours water from an amphora with his right hand as a symbol of the seas and rivers that water the country. Next to him, sitting on an anchor, appears Mercury, the Greco-Roman god of commerce. In the same direction, another figure depicting History appears, sitting with a book at her feet and holding her head with her left hand.

Finally, on both sides of these allegories and separated from them, there are two groups of children who hold the coat of arms of the Republic.

At the center of all this allegory and beneath the Republic is a gusset with the letters “GN” intertwined, meaning National Government and, on both sides, a branch of palm trees meaning La Gloria. Body care in the cold