Chapter 6 - Courtyard of Honor: The spatial location of this courtyard coincides with the former Casa de los Virreyes or Royal Palace 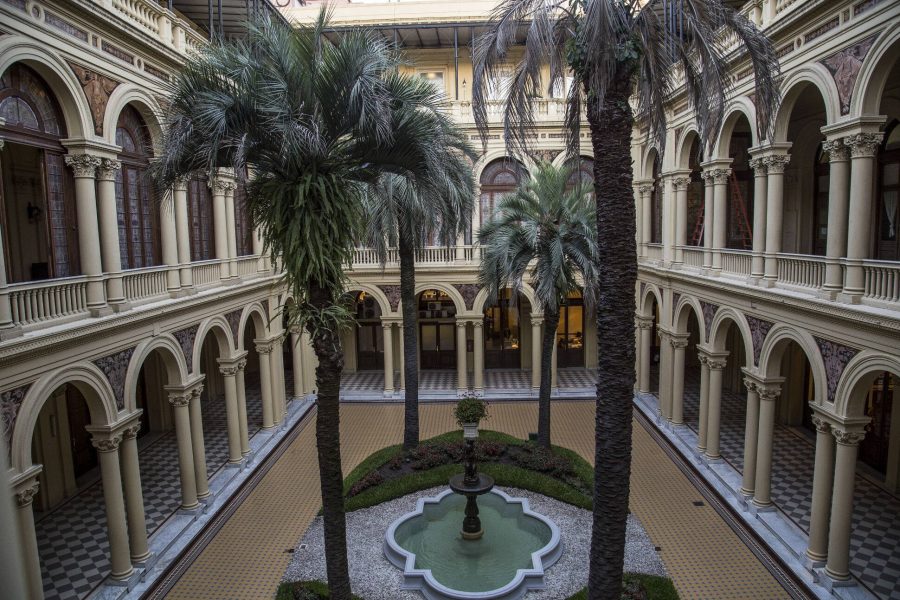 The spatial location of this courtyard coincides with the formerCasa de los VirreyesorRoyal Palace, a building that was used even by the first presidents. The idea of replacing the old building with an open courtyard allowed the architect Tamburini to create an open-air lung around which various units of the House are located.

It is also known as “Patio de las Palmeras” due to the four Yatay palms belonging to our native flora that adorn it and that were planted in 1904. This tree was common in 19th century Buenos Aires .

It's eclectic style like the whole building. It features Italian lines, especially in the north wing and in the presidential sector. On the ground floor and on the first floor, it is guided by perimeter galleries whose walls and ceilings are observed decorative paintings.

In the centre, there is an artistic iron fountain surrounded by a flowerbed with a perimeter guard in the shape of a white Carrara marble with grey vein. In this flowerbed, there are two coons of French origin who, like the fountain, were commissioned to the Art Foundry of Val D'Osne.

The floor of the courtyard and the galleries was English stoneware (in English enamelled ceramic) with geometric figures of various colors and smooth tiles combined in two tones. However, due to its wear, the original floor was replaced by tiles made especially in Italy with identical design.

In April 2012, allegorical murals were discovered in the lateral triangles to the columns of the arches that make up the courtyard that could not be seen at that time. They were covered by layers of paint and plaster. The first picture that came to light depicts a gargoyle with tassel decorations with small stripes. The total surface of the figure was painted in the fresh cementice of natural Siena earth color. These allegories are part of the grotesque neo-realist popular imaginary of the late 19th century to the beginning of the 20th century. It is assumed that these murals were made in preparation for the celebration of the centenary of the May Revolution - Yeah .