With the new migratory flows, the Cabildo and Casa de Gobierno were demolished and rebuilt with different European styles. 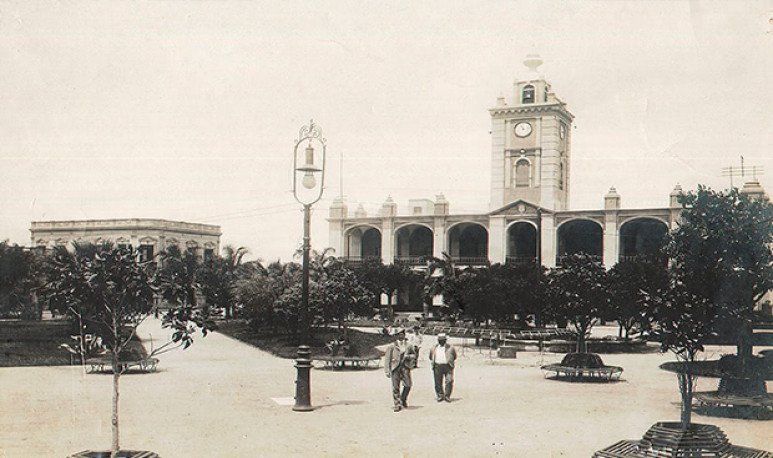 When the city of  Santa Fe  moved in 1660, one of the first buildings to be built was the seat of the  Cabildo  : its function was  to govern  and impart  justice  . The first was a very precarious   architecture   , with tapia and adobe walls, gable cane and wood roofs.

In 1814, due to its deterioration, the  authorities  decided to build a new  building  . This work, completed in 1821, was carried out thanks to the help and contribution of the  neighbors .

Within that historic  Cabildo  , events of great importance occurred both at the provincial and national levels  : provincial autonomy was announced from its balconies  in 1815,  treaties and interprovincial covenants were signed, and  National Constitution   in 1853. From that moment on, a major stage began: the arrival of  European immigrants , the impetus of  political, social and economic changes in the agro export model, the railways and the consequent emergence of villages around stations, the construction of ports. This  new scenario  caused more than significant  changes  in the life and  history  of our country.

On December 10, 1907, in the main hall of the  Cabildo  , the  Convention on Reforming the  Provincial Constitution   was solemnly inaugurated, and this is the last public act of importance to be held in the  historic enclosure .

Many of the above-mentioned transformations were reflected in the  buildings,  including the  Cabildo  , which was seen as a construction that did not correspond to the progress of the  time.  It is because of this, that the provincial government ordered its  demolition  in 1908.

The General Council of Education , then located on the top floor of the Sarmiento School (First Junta and May 1st), was the seat of the provincial government during the execution of the current Casa Gris.

The  construction  of the  Government House  took place between 1908 and 1917.  For the lifting of the building, the Cabildo, the Police Headquarters (known as the “giraffe” for its exotic tower that adorned the building) was demolished in 1903 by Governor Rodolfo Freyre on the corner of Calle San Martín and 3 de Febrero, and other constructions that completed the block . All this makes it possible to understand the spirit that animated these  majestic  works. It was not just about the realization of  new buildings , but the place that was chosen to occupy: the same place where the most representative architecture of the  Hispanic period was located. The transformation of the Plaza 25 de Mayo sector and its surroundings was due to a  modernization  and  progress  plan on which both the provincial and municipal  authorities  were committed.

Currently, there are the  governor's office and the Ministries of Justice and Human Rights, Economy, Public Works and Government and State Reform .

The Government House is a work by the Italian architect Francisco Ferrari and represents the triumph of eclecticism . It is the building that best illustrates the cosmopolitan spirit of the liberal period and period of  Santafesina architecture .

Ferrari opted for an incomplete symmetrical plant to the south, that is, half block with pavilions that circle two large courtyards, with a monumental scale composed according to eclectic academic prescriptions, with French and Italian predominance. With these keys, he resorts to designs with various effects, such as crowning the building with slate tiles, chimney, oculas, ridges, cherubs, garlands and portholes. A whole device developed to emphasize sectors such as the entrance portal, balconies and corner domes. For its realization, the best materials of the time were used, brought from different parts of the country and Europe.

Inside we find  the entrance hall, which stands out the main staircase built in Carrara marble, iron and bronze. Above it, the bell that formed part of the Cabildo since 1770 and was cast in the seventeenth century in the Jesuit missions.  After its expulsion in 1667, it was acquired by the Santafesino government and used to summon the neighbors in case of attacks on the city or celebrations in the Plaza de Armas, currently known as Plaza 25 de Mayo .