We tell you the life story of Pierre Herrouët, creator of Solar Inti, a social, environmental and economic impact project that revolutionizes cooking. 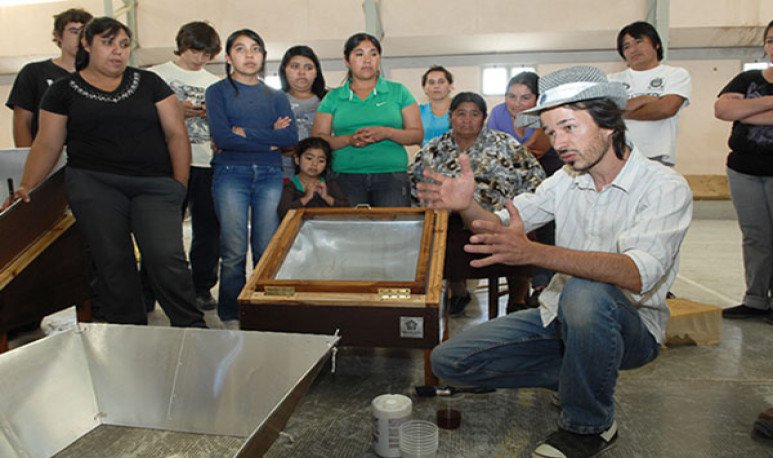 Agricultural engineer Pierre Herrouët  left his life in France to live  in Salta . His journey was unusual: he decided to travel the world during a relaxed sabbatical year and his journey included landmarks such as  Russia, Mongolia, South Korea, China, Japan, New Zealand and Chile.  Visiting Argentina was not something I had in mind, but a change of plans led him  to Salta, where he finally settled twelve years ago.

A project is born

There he built his own family and forged,  in 2008, the non-governmental organization Solar Inti,  which is dedicated to the manufacture of solar cookers. The production of this type of furnace  is intended for families  and communities that lack economic resources. For eight years, the NGO he created has  taught native communities in the north to manufacture their own solar cookers.  Already in Salta he came into contact with the  Siwok Foundation, which focused on the community development of the indigenous population.   He began  collaborating on a project  in which he met his wife, Josefina.

Bring to a dignified life

“ We saw how the people of the Colla community cooked in La Puna, the toxic smoke they inhaled   (every meal made from the wood-burning ovens was equivalent to smoking 40 cigarettes),     the large amount of soot generated  and how they had to carry 30 kilos of firewood on their backs a day. Then we decided that something had to be done to help”, e xplica Herrouët.  “ We started from scratch: we didn't know anything about carpentry,   and we started to manufacture some pieces and at the bottom of a land that we have at home  we started to assemble the kits  that we took to the Puna and with the first ten families we did the pilot project.”  Open to listen to the needs of the inhabitants, he and his wife were designing  the different models that today help more than 3000 families.

Herrouët contacted an old physics professor to  optimize manufacturing and began planning how to finance  the construction of these  solar furnaces for the Colla community in Salinas Grandes,  Jujuy. Instead of providing the kitchens, he organized workshops in which indigenous people were taught how to arm them with aluminum, glass and wood.  “ Our idea was that  each person could build their own kitchen , not give it already armed,” he says. After 80 other families with the same needs approached,  Solar Inti was born, which in eight years has manufactured thousands of organic kitchens in Salta and Jujuy.

More than just a meal

This model of action engendered a community movement,  with people who meet again after having gone through certain conflicts. And, at the time of sharing cooking and food, they improve and strengthen their ties .   “ The very essence of Solar Inti is the ability to generate those encounters between people”, said this solidarity entrepreneur  who lives in the city of Salta, which today markets these kilns and much of the profit is destined to help the community. From there he radiates his work towards towns and places in that province and many more.  “90 percent of our work is destined to the native communities because they are forgotten and isolated,”  he explains.

Solar Inti has developed three cooking models: on the one hand,  plots of different sizes,  which allow you to store the energy of the sun and convert it into heat  . High-performance kitchens, which are fed with branches and wood waste coming from the pruning of trees.   And thermal cookers  (with similar operation to the thermos del matte)  that allow energy saving,  with a gas carafe that has  a one-month performance lasts up to four months.

It is a project aimed at the  use of renewable energy.   In areas where these stoves are used  , firewood consumption was reduced by 80 per cent and lung diseases decreased.

Solar Inti's alma mater estimates that there are more than 200 people involved in this solidarity project.       “ We haven't stopped for eight years. And we can't do it because  we feel that the need is very great  and if we do not we there is no  other entity that can fulfill  this commitment that we have made”,   concludes Herrouët, who left a well-off life in France to put himself  at the service of the community.