The Rambla chair was designed by a Marplatense couple as a tribute to their family and their city. 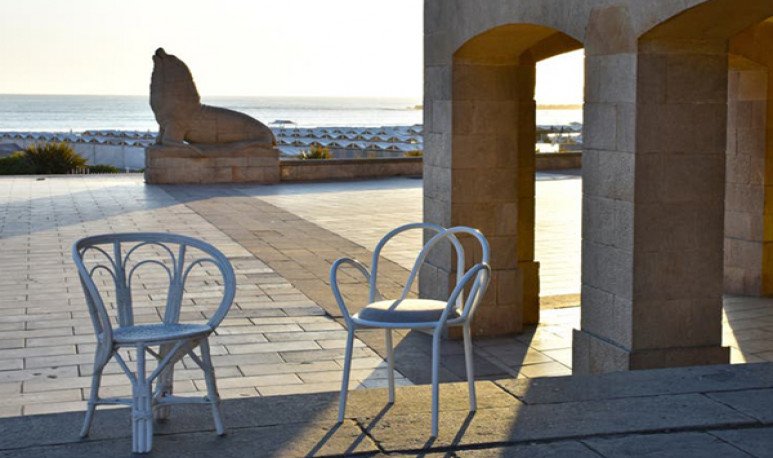 How many of us spend summers on holiday in  La Feliz ? Let's go back to those times: get to the beach with bags, follow the path of wooden tablets so as not to burn our feet, reach the tent, leave things and start to accommodate furniture.  A little table, a couple of lounge chairs and some chairs . Does that picture sound to you? Think now about the chairs that inhabited most of the seaside resorts of  Mar del Plata.  That's right, we all have the image in our head. Well, that  chair  is the one that this couple of Marplatan designers wanted to pay homage. The name chosen?:  Rambla . It couldn't be any other way.

For  Paz Cano and Santiago Rolón , that chair is much more than a summer memory. It is a tribute to his grandparents and a way to vindicate the city itself. The name refers to the  Paseo de la Rambla , the most typical of Mar del Plata, dating from 1888. In 1941, it was redesigned by architect  Alejandro Bustillo , who also gave shape to Bristol Beach,  Provincial Hotel  and Casino. With regard to the family legacy, both Paz's grandfather and Santiago's grandfather had jobs closely linked to the city.

The  icon chair of the Marplatan summers of yesteryear  today was replaced by other plastics that require less maintenance, but also take away the charm of the experience.  The original was handcrafted wicker , which required periodic adjustments.  Miguel Cano , Paz's grandfather, learned the technique from his father's hands. Then he founded the  La Obrera basket , an emblematic shop in Mar del Plata. Santiago's grandfather, for his part, was a photographer and devoted himself to portraying the holidays of thousands of families on the typical postcard of the city:   sea lions .

Paz's grandfather passed away a few years ago and the family basket closed. However, there was someone else who spent his days at the head of the business:  his grandmother, Irma Novo . She actively participated in the creative process of  the Rambla chair , as she brought her knowledge absorbed over decades of working in the basket. In addition,  it retains some of the original chairs , which were fundamental to the perfect design. Your verdict? He is happy with the result that maintains the spirit of the original chair and is also stackable.

The history of the chair begins with the story of its designers. Paz and Santiago met while studying at the National University of Mar del Plata. Today 10 years later , they are a couple in love and profession: they are partners of the industrial design studio Cano Rolón. From there came the idea of creating this chair as a tribute to his city, his family and the thousands of summers of family holidays.

The Rambla chair  has a metal structure: four bends in the form of arches intersect and make up the backrest and armrest. Its seat is upholstered in corduroy and has 3D technology and stain-resistant textile system. Its colors invoke sunrises and sunsets facing the sea. Rambla was selected by the  National Arts Fund  and also won the 2018 and 2019 Good Design Label, and the 2016 Museum of Decorative Art Award.

Anything that brings us memories of happy times, welcome.