Home Argentine All environment Yateí: the native bee that heals, feeds and preserves the environment

Its honey was incorporated into the Argentine Food Code and will be consolidated as a genuine resource for the communities in the north of the country. 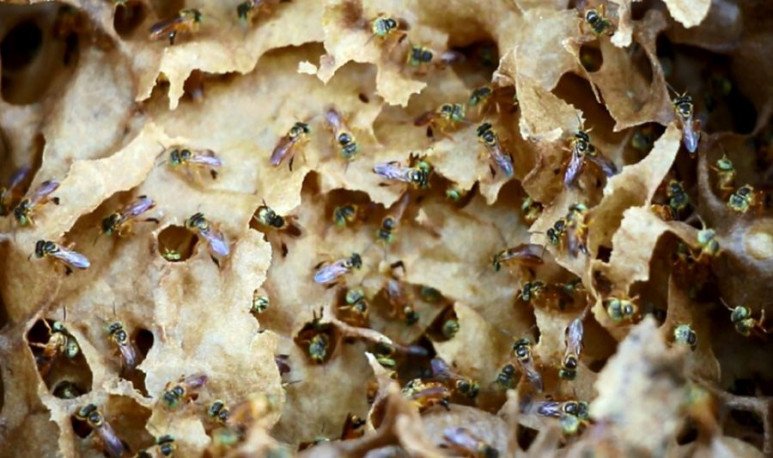 Its  honey  was incorporated into the  Argentine Food Code  and will be consolidated as a genuine resource for the communities in the north of the country. Through ethnobiology,  CONICET  researchers study its uses and cultural importance.

Until a few months ago, the  Argentine Food Code  indicated that  honey  was the product from  workers' bees  , referring to the species Apis mellifera, native to Europe and distributed throughout the world. A recent modification incorporated into this category the substance produced by the meliponads Tetragonisca fiebrigi, popularly known as yatei or rubita, making it a genuine resource for multiple communities in the north of the country that breed and use these insects for several centuries.

Honey from native bees  without sting is used as medicine and food, both by groups of indigenous peoples and immigrant descendants, according to several studies carried out during the last decade by  CONICET  researchers in different provinces. In addition to emphasizing their cultural and nutritional importance, they ensure that maintaining and enhancing the breeding of meliponads can help the conservation of the environment, by preserving fragments of native forests that, in turn, will serve as a support for the recovery of species.

In order to achieve the incorporation of yateí  honey  into the national code, multiple actions were required from different community, government and academic sectors. “It required a multidisciplinary teamwork, which was very long and intense, similar to what these bees make to produce their honey,” compares the independent  CONICET  researcher at the Institute of Subtropical Biology (IBS, CONICET — UNAM),  Norma Hilgert  .

It's just that to produce just a litre of honey, a colony made up of 5,000 bees works a whole year. This makes yatei production a highly valued asset for communities, where they use it selectively for specific purposes or market it at more than $100 per litre.

According to the cultural group and the species of  bee  that thrives in each environment, studies carried out by  CONICET  researchers have reported more than 400 different uses of honeys -alone or combined with plants-, ranging from the treatment of infections in the skin or respiratory system until cataract cure. “It is also used as a supplement to strengthen children's immune system. For example, it is very common to give children a teaspoon of yatei honey before going to school,” says Hilgert, who for several years has been involved in studies related to native meliponads from ethnobiology.

One honey for each region

In  Argentina , meliponads are distributed mainly in the  northern provinces , even reaching some regions of  Catamarca and Buenos Aires .  Misiones  has the most track record in the use of this resource and more than 30 years ago promotes workshops on the management of bees in which, together with the villagers, best breeding practices are defined, methods to move a nest from a tree to a box are established and what is the most important moment is evaluated suitable for starting harvesting.

Despite this vast experience,  yateí honey  enterprises did not achieve the expected development in recent decades because production could not be formally marketed. Incorporation into the Code is the first step towards achieving the certifications and registrations necessary for it to be sold in official markets.

The next instance in the process of valorization of meliferous production, explain the researchers, is the characterization by regions. “We have evidence that these bees prefer native flora and that they particularly use the nectar of wild fruit species which, in turn, are used to make sweets. With organized work, they will be able to obtain not only regional jams, but also honeys exclusive to each area,” adds Hilgert.

In addition, it is anticipated that honeys from four other species of meliponads are expected to be recorded, characteristics of other environments and valued by different cultural groups. “One of the objectives is that these resources can become more income for the diversified system that local producers have, who in their farms are dedicated to different crops and make an integral use. In this way, sustainable native economies are strengthened and family production systems are strengthened, as well as contributing to the maintenance of ecosystem functions by promoting the presence of these native pollinating insects,” emphasizes the researcher.

From ethnobiology, researchers navigate between the theoretical frameworks of biology and anthropology to study the uses and management that different human groups make of nature's resources. The approach puts at the forefront the link that is established between the person and the resource, analyzing both the use and the way in which knowledge is acquired and transmitted.

The valorization of meliponiculture in each of the regions of the country where sting-free bees are present will be a way of strengthening food sovereignty, which is the right of peoples to choose what to produce and consume. “When we talk about local production systems we mean those that are linked to wild resources or those naturalized that have been incorporated into the local cultural heritage, that is to say resources that are naturally renewed. This is essential to generate identity, as well as contributing to the family economy,” explains  Hilgert , while clarifying that yatei honey production should not be seen as an opportunity for enrichment for producers or an alternative to exploitation on a massive scale.

“Industrial logic, applied to diversified production systems of medium or small scale, usually does not get along with conservation. What we are looking for is to make a contribution through use”, warns the researcher. A possible strategy to achieve this will be the recovery of fragments of native forests that are impoverished on private land. “The owners of the chakras will see that it is a good alternative to replant native species because they are used by yatei to make honey. This would not only allow them to generate unique products, but it will also give value to those remnants that, in turn, will help the recovery of biodiversity,” he adds.

For multiple causes linked to deterioration of the environment, bees of the Apis mellifera species are in decline, with cases of massive nests and scarcity of honey production in many countries around the world. Although this phenomenon is not yet recorded in Argentina, the possibility of local hives being affected is motivating the interest of beekeepers in the use of native bees.

The works of ethnobiologists point out that knowledge about meliponads is fragmenting. “In communities, we find older people who know what meliponads are that produce remedies and what to use them in many different recipes, but they no longer go to the countryside. On the other hand, there are young people who know where bees are and how to harvest them, but they do not know exactly what they are called. That means we are at risk that information will be lost. To this we must add that populations of some species are diminishing due to changes in the environment,” explains  Hilgert , who trusts that the incorporation of yateí honey into the food code will generate a commercial impulse that translates into a renewed interest in the whole cast of meliponads.