Why did the wetlands of the Argentine coast become protagonists of countless hashtags on social networks? In this note we explain everything. 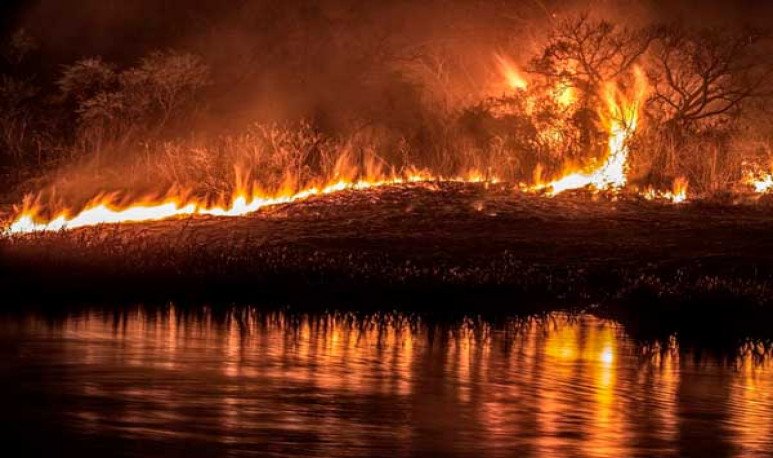 Fires  on the  islands   of the  Paraná River  continue to grow. Every day, it is possible to visualize a new focus from various  cities  and banks. The first fires began in February and since then  spread   indiscriminately  . The magnitude is such that the National Fire Management Service reported that currently the affected area reaches about  90 thousand hectares . Meanwhile, wetlands struggle  to resist  and their lungs have no  respite  .

The landscape is  horrifying  and  bleak  . In the distance, the lights coming from the flames illuminate the water and the red color burns so much that it hurts. The smell was adapted to the smell of smoke and the reduced visibility makes it impossible to distinguish between astigmatism and human evil. I wish it were special effects, but the situation is even worse in the vicinity. Birds and mammals are displaced and cornered by fire. Dead capychos, cremated snakes and otters on the coast trying to escape to survive.

Wetlands  are sites of great  biodiversity  that, permanently or intermittently, are covered with water. They are responsible for storing  30 percent  of Earth's carbon and account  for 6 percent  of the planet's surface. Among its great contributions, we can affirm that they are spaces in which sediments and nutrients are retained. They also help mitigate climate change and sustain more than  100,000 species of animals and insects .

In  Argentina  there are approximately  600,000 km2  of these areas, representing  21.5 per cent  of the national territory. Examples of these include the  Esteros del Iberá  (Corrientes) and the  Delta  del Paraná  (Santa Fe, Entre Ríos and Buenos Aires). There are also  Laguna de los Pozuelos  and  Salinas Grandes   (Jujuy), among others.

The fight for its protection and preservation

Decades ago, wetlands were classified as marginal or worthless places. However, as their  economic potential  was revealed, they began to become highly  threatened   ecosystems  . In this way, commercial agriculture projects and livestock enterprises multiplied along its surface. However,  there is no  regulatory framework in the country that controls such activities and applies appropriate sanctions if necessary.

In  2012  , a process was initiated to promote a first bill on minimum budgets for their protection and rational and sustainable use. Since then, various legislators, NGOs and universities have worked together to secure final approval. Under this line, between  2013  and  2016  the debate came to take parliamentary status and the problem settled on the agenda. Although the initiatives presented won votes in the Senate twice, they did not succeed in deputies. The reasons? The pressure from the  business lobby  was stronger.

At present , there are various proposals going round. Although the novelty is that the  lower house  started discussing one in particular this Wednesday. It is authored by the  MP  for the Front de Todos  Leonardo Grosso  , and establishes  fines  of up to  840 million pesos  . It also defines the burning of these sites as a  criminal offence  punishable by six years' imprisonment. The exhibition took place in the commission of Natural Resources and Conservation of the Human Environment and was the first of four meetings.

While the demands were echoing in the legislature, on Twitter the hashtag  #LeyDeHumedalesYa  became trendic topic. The same happened on other platforms such as Facebook or Instagram, the latter being the most chosen to graph with images what has been happening. In this way,  social struggle  took on relevance both face-to-face and virtual simultaneously. In fact, during the last time there have been marches, both in the towns of  Victoria  and  Rosario  , in search of answers. Thus, the bridge that unites the two populations also became a participant, sending a more than clear message of  defense  and  popular will  .