The islands of the predelta have been hot fires for years. However, it is now up to Paraná (Entre Ríos) to breathe the smoke. 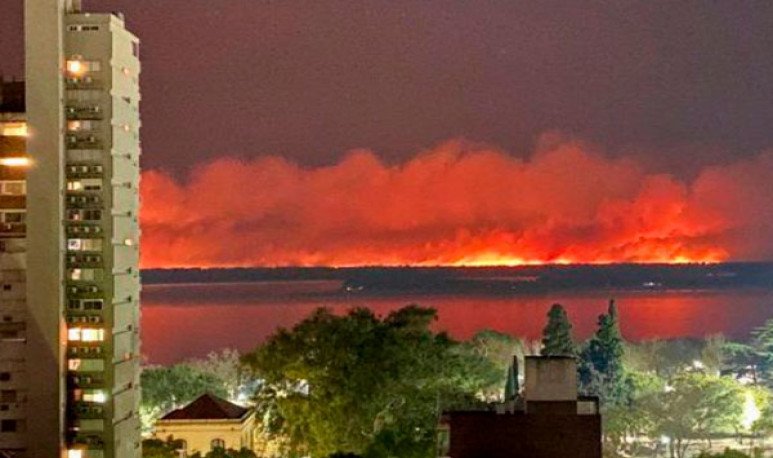 There was a day when Paranaans  swept ashes  instead of fallen leaves from trees. The  pure air  that the landscape city usually presents has transformed into a  strange smell  and  toxicity  . While most did not understand what it was, a vast cloud covering the local sky could be seen from afar. The answer came with the passage of hours: large  fiery foci  were falling off on the  Santafese islands across  the street. If this  year  seemed  fictional  , the  Chernobyl-like  context eventually enshrined it.

Of course, the instantaneity made his own and the  photos  did not take long to arrive. Thus,  Instagram  became  irrefutable testimony  to an  irresponsible practice  that increasingly occupies the covers of national and regional newspapers. In the meantime, if you Google the word   ecidio, it  will be possible to visualize the countless complaints that took social networks as the main platform. In that sense, hashtags serve as centers for nuclear the claims of a society filled with political voids. Among them, we read  #salvemosloshumedales, #bastadequemas and #ecocidioeneldeltaparana .

Specialists explain that the  phenomenon  is repeated every year for this time and that its goal would be to eliminate weeds. In this way, it is intended to improve the pastures or prepare the land for cultivation. In addition, they clarify that fires usually cease in the month of October, with the arrival of rains. However, the  impact  on  biodiversity  is not reversible and the  consequences  on the  health  of nearby populations less. The extensive drought, the downstream of the river, the condition of the winds and the human desire for economic concentration are all the triggers.

Although for the capital of Entrerriana this event represents a novelty, the truth is that for the city of  Rosario  it ceased to be. Under this line, the locals became accustomed to reduced visibility due to smoke from fires. Even, there are days when it is not possible to detect if it is sunny or cloudy. In your case, the  flames  are taking on  extraordinary dimensions  , generating  sadness  and  despair  . The situation seems to be  out of control  at this point and the provincial  governments  of Entre Ríos and Santa Fe  take responsibility for each  other.

It is that the burning of grasslands takes place on the islands of the  Victoria department located in front of them. As the  chaos  takes shape, possible  names   of entrepreneurs  who would be provoking it are revealed. However, the  authorities  stated that state  resources  are not enough and that the  containment plan  is not working either. Under this framework, the tasks of the brigadistas sent to the scene were far from settling things. On the contrary, they even felt that they aroused the hunger for power more, as when they withdrew everything began again.

The indignation grows with the passage of time and the smoke too. If  Argentine society    stands out for something, it is for gaining  unity  and  consensus  in the most unusual moments. In a climate where the pandemic already has us tired and even generates fractures, the danger of the environment brought us back together.Passivity is no longer a valid option and populations in various cities are coming out to protest.  Political inoperance  is no excuse and there are rights that must be respected. Destroy must not be in vain. They should be used as kicking in  raising awareness  and drafting  protection and preservation laws  .   Opportunities  will emerge from  crises .