Indiscriminate burning of grasslands reached unprecedented rates in Santa Fe. The phenomenon is not new. The novelty is that, this time, we see him in the city. 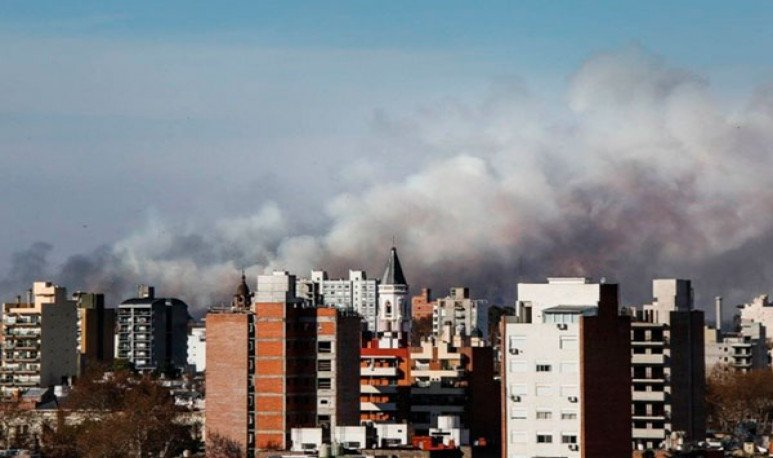 I live on a 15th floor. It's been  cloudy for several days, at least as seen from my balcony. But that appearance soon shows its truth: it's not clouds, it's smoke. Today, the thing went further. Those of us who had not yet opened their eyes, had to do it yes or yes . The laziness had us in cages . Some,  not even a pandemic made us stop the ball  and rethink what we're doing wrong as a society.

Today, it wasn't just smoke anymore. From my window there was fire on every edge of the horizon. To the south, to the west, to the north... Fire. Smell of smoke. The clothes that were hanging outside seemed to have been next to one of those well-completed roast. As I started to interact with people,  I learned a lot of terrible things : clinics and sanatoriums multiply the consultations of people with respiratory problems. On the coast of São Tomé, a house was burned down.Wild animals appear in cities...

It is true that during a pandemic it is difficult to prepare for  a more serious problem . When you live in a context of crisis, time fades like smoke on the horizon between fears and daily chores. What happened is that the smoke came, but as a consequence of the grassland burning.

The  extraordinary downhill  in which the Paraná River is located poses an aggravating scenario that exposes the wetlands and it is predicted that the fires will be more severe. This progress represents a new scenario of conflicts, reflecting the health issue. And it adds a component to the alterations of ecosystems:  the previously waterlogged areas are now dry soils , loaded with vegetation or organic matter. They are a combustible material that complicates fire control.

Why are we burning?

Of course, while this phenomenon seems unusual in terms of what I have just described, grassland burning   is nothing new . In 2008, almost 17% of the entire surface of the Paraná delta burned .  From Rosario to the Campana area. Organisms, both animal and plant, are directly affected by fire. Vegetation dies on site because it has no chance.  Animals move, but in reality, they lose their eggs,  nests, caves, even the possibility that they can feed is lost. That's why they run away.

The main reason for the burning is already more than a suspicion:  livestock entrepreneurs “have to” clean or weed  the islands and burn the pajonals. The “small detail” is that there is a very large drought. Thus, the foci reach high temperatures that can affect seed banks in the soil. This causes the green plants, which shelter under these pajonals, to burn as well.

Another key factor of this burning in times of low rainfall is that there is a lot of dry matter. In addition to burning micro-organisms from the soil and older animals, it releases carbon dioxide into the atmosphere. Clearly , this negatively affects the environment and health  of people.

Fire management would have to be in line with land management objectives. In other  words, actions have to respond to strategic planning , taking into account factors such as the likely effects of fire, risks and costs. On the contrary, we are faced with a scenario marked by intentional actions that seek to obtain a better yield from pastures, regardless of the negative impact on many other areas.

A law to stop this madness

Sao Tome. The town of Rincón, the countries zone in the western ring road of the capital and the neighborhood El Pozo, inside it. All places that suffered fires, but never before had been hotbeds of grazing land burning.

The  environmental  emergency has already been declared in the area and work is being done to identify the owners of the fields where the burns were carried out. Even so, civil society calls for the adoption of  a Wetlands Act  as soon as possible to implement measures to guarantee their protection.

With posters and photographs, a group of Rosarinos showed the effects that the fires are producing on the environment, on June 18 in the  park of Spain . They are asking for a solution to the intentional burning of grasslands in the island area, leaving the  city covered with smoke.