Home Argentine All environment No water and no people

For the first time in its history, the Iguazu Falls are without water and without people. An uncertain panorama for the 7th wonder of the world. 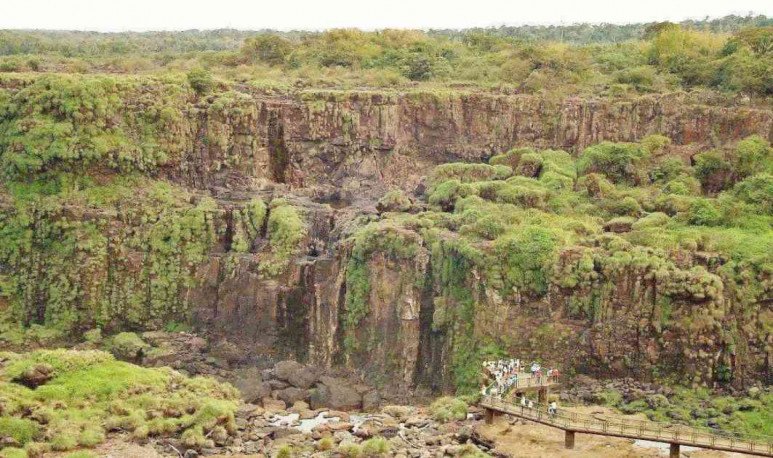 100% of Argentines know them, most of them ever visited them. The majestic Iguazu Falls are our great natural jewel, the 7th wonder of the world. However, today they present a bleak postcard. It's a gigantic rock without water and no people. No water, due to a historical drought; no people, because of quarantine.

Naturally, this terrible situation affects the economy of thousands of missionaries who live in this unparalleled beauty that nature gives.  The city of Puerto Iguazu is completely paralyzed. More than 80% of its population live, directly or directly, from tourism . The panorama ahead, far from reasuring, scares. The risk of losing jobs and being infected by the pandemic is growing day by day. As never before in its history, the paralysis of tourism is added to phenomenon that has not happened since 2006. A voracious drought that causes the Falls today to be practically without water.

The mandatory quarantine has closed the doors of the Iguazu National Park, which resulted in an immediate liquidation of tourism. The city of Iguazu is dependent on tourism that does not one yet begin to imagine new subsistence alternatives.  The numbers are blunt . Easter is the “high season” of the Falls. During that time, hotel occupancy is 97.1% and an average of 11,000 people per day is received. Today's Holy Week recorded an average of zero tourists.

The expectation of a soon return to normal seems daunting . It will only be possible to aspire to a recovery in several months, towards the end of the year. And it will be conditioned, with little hope of a forthcoming reopening of borders. Consequently, the idea during this 2020 is to rebet on Argentine tourists.

On the other hand, drought in the Falls is due to a cyclical event that occurs every 15 years.  And that unfortunately coincided with the pandemic. Usually the water flow rate is 1500 cubic meters per second. This is what gives life, what moves the threads of the 7th wonder of the world. Now, the Iguazu River is at about 280 cubic meters per second. Worst thing is that it is feared that it will fall below its 1978 historical record, when 120 cubic meters were recorded. Whether this is due to a natural process or the action of Brazilian dams, it is still a debate far from being settled.

People are not the only ones affected by waterfalls without water and without people.  Animals are also facing a radically new scenario.  Their behaviors were affected by the absence of tourists, which in some cases were their main source of power. Fallen monkeys and coatis, for example, usually feed on what tourists give them. Today, these animals walk deep in the jungle, looking for a new way of feeding. “In the last few days we didn't see them again,” said Sergio Acosta, major of Iguazu National Park.

Another animal that has changed its behavior is the waterfall swift bird . This bird nests on the rock behind the jumps and uses as cover the jet of the waterfall to avoid the threat of predators. Now, in the absence of water, you have to look for a new place.