Home Argentine All environment It was just an early break.

The rain brought only a break, but the fight against fires continues. Meanwhile, environmental professionals advocate laws that address forest rights. 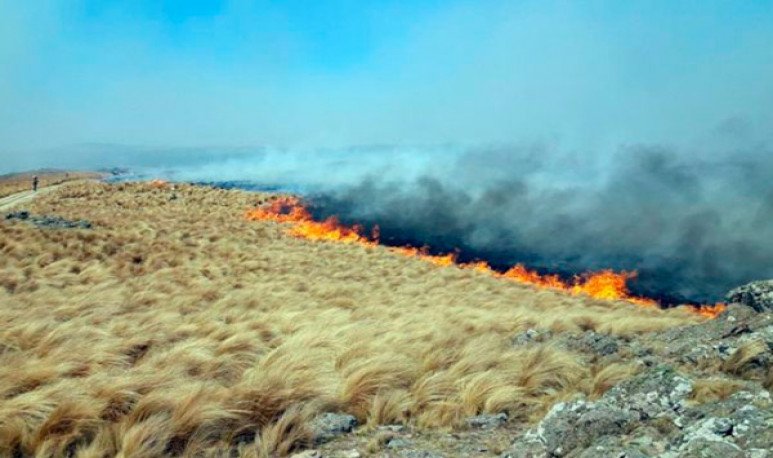 In Cordoba, in the midst of a desolate drought, we were surprised by a calm and constant rain during an October night.  It was enough water needed  to deactivate the spotlights, to give us strength and hope.  However, a few hours after heaven's blessing,  thunder reactivated  the spotlights in Capilla del Monte. These would be controlled by volunteer firefighters and neighbors who are attentive, unable to catch an eye, in a state of alert, to take care of the native forest.

The rain came after 5 months of extreme drought, and brought peace . But that quiet lasted only a few hours.  Civil Defense teams  tracked the Sierras, making sure that the affected spaces are not  still at risk  of starting fires again, saying that everything was calm: the native mountain was breathing again in peace.  However, within hours of the calming rain,  firefighters and neighbors had to operate emergency again.

A spotlight that gives no truce

Today, the focus of Capilla del Monte is still active and the climate does not help  as rains are not expected until the following week. One of the spotlights in the western sector of Cerro Uritorco  was quickly contained , however,  the state of alert continues.  Fire, despite nature's attempts to recover, seems to give no truce.  Campaigns to collect donations from neighbors, the action of fire teams and the alert of all Cordoba people continue.  The rain was only a break, an early but necessary recess. More strongly, today the entire population goes out to fight  to preserve the territories that are affected and that are defended by the locals   in order to be marketed  for business real estate.

Professionals in the native forest

In the midst of a pandemic that ravines everything and keeps us quarantined, in Cordoba, the fight is with  another enemy, more visible than the virus: fire. Thus,  the authorities of Conicet Cordoba, together with the institutes that compose it, sent a letter to the provincial authorities of the executive, legislative and judicial branches.   In the document they  express their concern about the succession of fires that the province has been suffering.There are several professionals dedicated to  topics related to the environment, flora and fauna  at the National Council for Scientific and Technological Research (Conicet) of Córdoba. That is why its action is indispensable.

The note was signed by the board of directors of the Scientific and Technological Center (CCT) of Cordoba  chaired by Maria Perillo and Adrián Carionetti. In one of its paragraphs it expresses      “deep concern about the unavoidable causes and devastating consequences that the wilful and/or accidental fires,  which occurred during this year (but unfortunately occur year after year in Cordoba), have have and have on biodiversity, soil, water regulation, air,  archaeological sites, regional economies , housing, public health and life in general”. The note was addressed to the authorities, including the  governor, the president of the Legislature and the head of the High Court of Justice.  And he points out that  “the level of environmental degradation that our province suffers, puts at risk the right of citizens of Cordoba to live in a safe and healthy environment.”

Only with public policies will we save our mountains

This document calls for State and Government policies  that are dedicated to the recovery of native forest.  As well as to frame those responsible for wildfires, who are the majority. In addition, it calls  for “the appropriate level of investment to finance comprehensive fire management policies, including education and training, prevention and early warning, control, mitigation, remediation and restoration”.  Among other requests, which  aim to   improve the environmental status of the province and the country, protecting and preventing this kind of natural disasters.