We tell you everything you need to know about the thousands of hectares that are being razed by fire in the province of Córdoba. 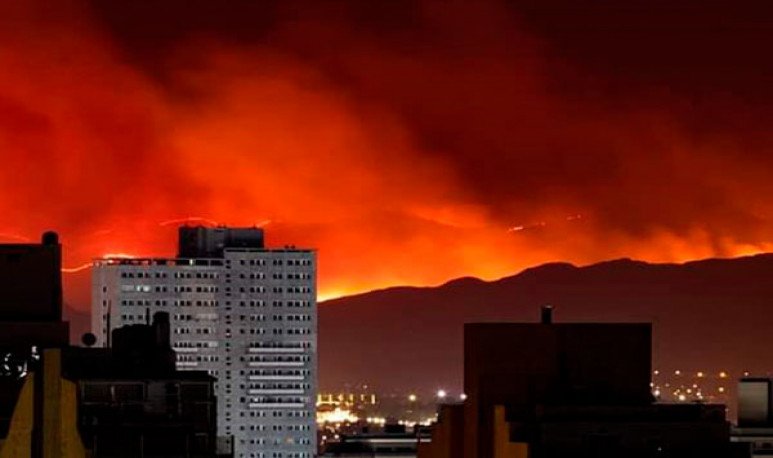 In the province of Córdoba we are  losing native forest, native species and landscapes of the most loved ones . Life is in danger, and those who don't give their arm to twist are firefighters and firefighters. Those who fight from the beginning, and will fight to the end. Collections are being carried out  from the city and different parts of the province to contribute to the state of general emergency in the mountains.In addition, many organizations and freelancers are taking care of getting everything collected.  Non-perishable foods, mineral water, yerba, sugar, milk and alfalfa for animals,  among other things.Because an entire ecosystem must be saved, and it's time to hold us responsible for so much damage done.

Cordoba has been under flames for two weeks.  Two weeks in which entire families lost their homes, where professionals do not rest and thousands of animals  flee desperate  and hurt.  Two eternal weeks, which took approximately 40 thousand hectares so far.  According to Sergio Busso, Minister of Agriculture and Livestock of Córdoba,  “90% of those affected are small producers with fewer than 100 animals, and they need a very large hand.”  Civil Defense called it  “the largest fire in the last twelve years.”

Some of the hotspots that are still active are those of Copacabana, in the department Ischilín, Capilla del Monte and Cruz del Eje in Punilla Valley. A sector of Sugar Loaf, which puts Villa Allende and Cosquín at risk.Diego Concha, who is the head of Civil Defense, said that the advance of the fire and smoke forced more than 150 people to be evacuated .  Others decided to self-evacuate  because of the proximity of the fires. While the  fires in Córdoba  are news throughout the country, but not international news like those in Australia, we Cordobeses  find ourselves triggering , but also reflecting.

What kills is drought?

The governor of the province and other authorities state that fires are because  “climate punishes us” , however, there is resistance. It has been brewing for a long time, since  forests and reserves are not respected.  This resistance is what it fights, and demands that the ravaged lands be declared reserve (if they were not). This sector  suspects that it is not just the weather . Thousands of organizations fighting deforestation and, caring for the environment, claim that  these claims are not natural,  they are intentional . “The inaction of the State and the legal gaps in terms of damage remediation show that this is part of a policy, the policy of ecocide “,  argue from the  Assembly in Defense of the Environment Córdoba Capital.

Several facts, not isolated, become evidence in favor of this hypothesis. Fires never hurt large agricultural producers. And they become a form of  defense of private property and agribusiness.  While entire families call on rain, and a whole country prays to the gods that water will reach this  part of the world ,  disputes are given indoors.  On the part of minorities who have power over all lands.

“ Here we all know that fires are intentional, they don't incidentally or magically light. The real estate business is very large in the area. Coincidentally the fires are also lit by the routes where the highway projects intend to pass. We who live some fires here already know what this is like,” says  Tania, 36 years old to La Tinta. She is part of the  Amigos de la Reserva Camin Cosquín association.

Neither the weather, nor negligence

The lack of rain favors fires, but does not cause them, those who cause them have clear objectives.  In Córdoba 95% of fires are intentional, casually  the spotlights protect private properties  and help the development of soy or livestock production and the real estate or construction business civilians.

“ The hegemonic media speak of the negligence of 'some baquean' who was burning pastures, or the unhinged action of some arsonist, the truth is that the testimonies of neighbors who see people are repeated  with naphtha drums , quadricycles or horses starting spotlights over and over again. We can believe in these versions or think that  there is some sinister hand behind the fires in the mountains”,  tell the media from the Assembly in Defense of the Environment Córdoba Capital.

For the time being, what we do know is that the burned areas almost always coincide with native forest territories in yellow or red zone (maximum protection) intended by the real estate business, by the State for some road work, or by the agricultural extractive production business in the provincial north”, sostiente this formed group  fighting  the mass massacre produced by these fires. We reflect, and in the meantime we hope that heaven will give us a gift.