We tell you the story of Juan Ignacio, a brave little man who walks on his bike, touring and discovering the world with new eyes. 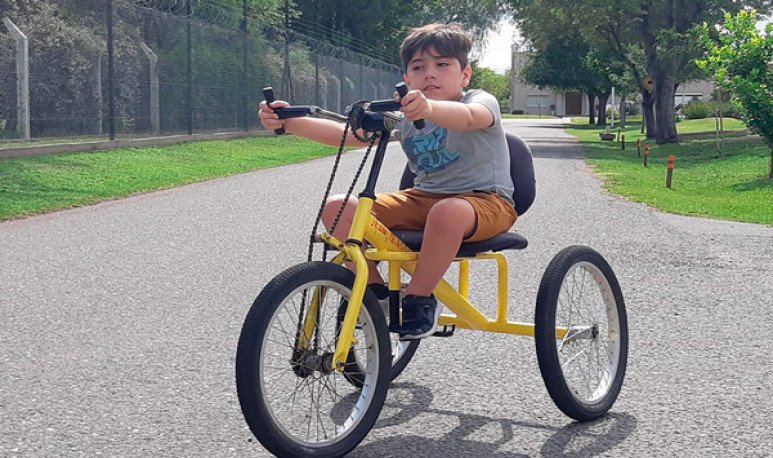 Juan Ignacio is 8 years old and is Cordovan from pure strain.   His story shows us a  brave and inspiring personality  , which is not allowed to be overcome by any obstacle. Juani was born with a disease that prevents him from walking,  but thanks to a foundation   he achieved the freedom to mobilize.  His story was consolidated as  an example of resilience , and that is why the media interviewed him. He barely had a chance to talk to many people at once, he said that in all this time  he really missed going to school.   But he's still looking forward to the new school start.

Juani learned to  move easily and naturally, following its essence.   Two years ago,  through the Jean Maggi Foundation , a non - profit Cordovan NGO created to help children with disabilities through sport,  his parents got the bike  with which he travels through the San Isidro neighborhood, in Villa Allende.

To be born battling

Since his birth, Juan Ignacio faced different obstacles.  Born with spina bifida, myelomeningocele type,  which, according to the Association for Spina Bifida and Hydrocephalus,  “is a congenital malformation in which the neural tube, a thin canal that forms the brain and spinal cord, does not end up closing correctly”.

His father Santiago Martínez Paz knows that  Juani is 'son e 'tiger'  as stated in the Argentine saying.  “ At birth with four and a half kilos,  it was always a bull,”   he tells the media. His mother Silvana Beltrame, meanwhile, recalls that on the same day  he was born he was operated on the malformation  and seven days later,  for hydrocephalus, to put a valve on it.    “ And then, on the knee, to make it an extension of the ligament,”  he tells the media.

Today the brave little man manages himself,  walks with the tricicicleta and those movements maintain his musculature. In addition, it has a team of professionals that help you improve day by day. At first, the family went through hard stages,  between fear and uncertainty,  but they gradually adapted to all situations; and above all,  they were relying on Juani's fortress  .  “ He is very independent. Sometimes he asks for help to tie his laces,”  his mom narrates.

My only hero in this mess

Juani's heroine is not science fiction.   He's real and he lives with him, it's about  his 10-year-old sister Lara.  They're cronies and very close. In addition, the little one has friends from the neighborhood with whom he goes for a walk, and he  adds links to those of the school , whom he could not see because of the pandemic. But during the quarantine, he studied with his therapeutic companion  and went on to fourth degree.

His parents are proud and reveal that they learn from him all the time.  “ We have a philosophy, which is: there is always a way to solve something,”  they say. They continually think about  improving their quality of life  and motor skills. That's why when a co-worker from Santiago told him about the bike created by the  Jean Maggi Foundation,  he got involved to know what it was. Until he received one.

Riding in a trici

After a time of adaptation and without denying the initial resistance,  Juani says that “la trici” is his ideal companion,  although he has to give “strong strokes”  to advance.    “ But it gives me freedom to visit my friends,”  he says. He passes to her from his wheelchair, moves her with his arms, takes her out to the street and moves to where she wants,  freely and suddenly.

This organization was founded in 2016 by Cordovan Jean Maggi, already delivered 600 throughout the country and set up a factory.  Jean Maggi, who lost the mobility of his legs due to polio, and 15 other referents work day by day to transform lives.  It has 600 tricycles delivered  in almost all provinces,  at no cost to families.    One of the latest projects is the factory , which works in Espacio Quality, where they are manufactured by children with disabilities.

Applause for Juani and Jean Maggi!